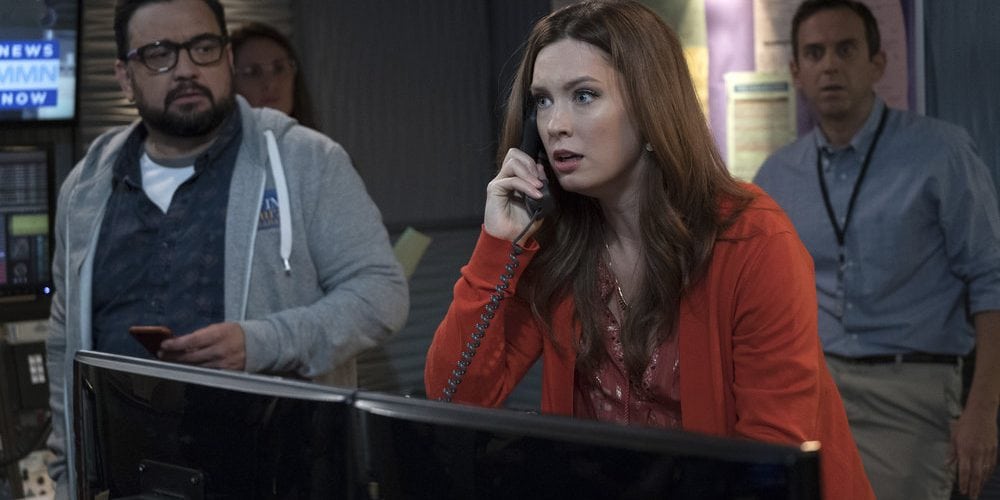 ‘Great News’ is an American sitcom television series that airs on NBC. Conceived and penned by Primetime Emmy Award Winner Tracey Wigfield, known for ’30 Rock’, ‘Great News’ tells the story of a daughter who has to cope working with her mother. This is also Tracey’s first series as both creator and producer. The series found co-executive producers in Tina Fey, known for Netflix’s ‘Unbreakable Kimmy Schmidt‘, Robert Carlock, and David Miner, who has worked on shows like ‘Parks and Recreation, ‘Master of None‘, and ‘Brooklyn Nine-Nine‘. The show first premiered on April 25, 2017.

Family and workplaces are ideally kept separate because we all maintain a kind of personality that is reserved for our work environments. On the other hand, the family space and interactions are marked by individual quirks which often go over the top. Thus, when family life and work life coincide, it leads to a set of challenges. More importantly, there is a reversal of the power dynamic here when the mother joins as an intern in the company where her daughter works, meaning technically within the workspace, the power structure favors the daughter, while this remains a natural inversion of the ordinary mother-daughter power structure.

Naturally, the above aspects of the show are crowd pullers, not to mention that the people involved in making the show are acclaimed for their work which always goes a long way in convincing people to tune in. Thus, this series has a steady fan following. Critics too have lauded the show, saying, “Great News overcomes its familiar trappings with gently subversive humor and a smart cast of talented, likable actors.”

Great News Cast: Who is in it?

The main cast of ‘Great News’ includes Briga Heelan who plays Katherine “Katie” Wendelson, a segment producer at The Breakdown. Andrea Martin is cast as Carol Wendelson, Katie’s mother and an intern at her office. Adam Campbell plays the role of Greg Walsh, an executive producer at the company. He is Katie’s boss, and the initial season established that they have a thing for each other. Nicole Richie plays the role of Portia Scott-Griffith, a co-anchor with a modern outlook.

Horatio Sanz is seen as Justin, the video editor. He is not comfortable editing graphic videos in the darkroom and is seemingly disturbed. John Michael Higgins plays Chuck Pierce, a respected network anchor who works with these people now. There are several recurring and guest characters. While Fey and Wigfield themselves appear on the show, the guest cast has notable people like Chris Parnell of ‘Archer‘ fame and Ray Liotta of ‘Goodfellas‘ fame.

Great News Plot: What is it about?

‘Great News’ is about how Katherine “Katie” Wendelson, a segment producer at The Breakdown, has to cope with working with her mother who is an intern there.

Growing up, Katie always found it difficult as her mother was controlling her all the time. Her mother always believed that she was destined for greatness. At the age of 30, Katie is having a mid-life crisis and wondering how to go forward. This is also the time when her mother, Carol (Andrea Martin) is looking to explore new opportunities. With no prior job experience, she finally decides to chase her dreams and gets lucky with an internship in a news show, where her daughter is working. Although Katie is not too keen about it in the beginning, she soon realizes that they are mutually benefitting each other with words of encouragement and support.

The Breakdown team gets the act together and always makes the impossible possible when it comes to delivering the news on time. Chuck Pierce (John Michael) plays the co-anchor who is never pleased with the material. Everyone is intimidated by him, except for Carol, as her experience as a mother helps her to bring out the best in everyone. Portia, played by Nicole Richie is the news partner of Chuck. Her contemporary ways are valid and refreshing. She also has a flair for social media, which helps the team a lot.

Greg (Adam Campbell) is the leader of the news team. He is also their charismatic executive producer who keeps the team gelled together. Horatio Sanz plays Justin, the video editor, and Tracey Wigfield plays Beth, the stereotypical weather girl.

In the sophomore season, there is a new boss in town in the form of Diana St. Tropez (Tina Fey). She wishes to reinvent the programs, which affects everyone. This forces Katie to seriously rethink her future. The season also shows her having a romance with a New York Times reporter.

The Hollywood Reporter best sums up the show, saying, “The show’s aggressive comic rhythms are straight out of the Fey/Carlock playbook with wide-ranging pop culture references, malapropisms, non-sequiturs, aggressive punning and parody cutaways like the British version of Shark Tank, Josh Duggar, a new Sue Grafton book or the popular app Biscuit Blitz that gives the season some serialized structure. The hit-to-miss ratio improves dramatically as the first season progresses.” However, the series could attempt to be a little more consistent in its deliveries, which would establish it as a solid comedy.

Great News Season 3 Release Date: When will it premiere?

‘Great News’ Season 2 premiered on September 28, 2017. As far as the next season is concerned, we have bad news for the fans. NBC canceled the show on May 11, 2018. Fey and Carlock touched upon this, saying, “That is a heartbreak because Tracey Wigfield was really firing on all cylinders running that show and that cast were delightful and so funny and we could’ve done that show for seven seasons and it would’ve stayed consistently funny.” Unless some other network decides to review the show, ‘Great News’ Season 3 stands canceled.

You can check out the trailer for Season 2 below to refresh your memory of the show. If you have not seen the series, do give it a watch if you enjoy sitcoms.