The quality of a movie is determined by how well it is able to do what it sets out to do. If there’s a story to tell, is it told well? How’s the camera work? The background score? The production design? If the answers to all these pertaining to a film are in the negative, then the film is considered to be bad. Despite this, some aspects of a movie that are external to it but directly related may aid in providing it with some kind of value, acting as a sort of saving grace.

The 1998 ‘Godzilla’, for example, is considered to be one of the worst films of all time, but many have admired and praised its suspenseful and intriguing trailer, which was highly effective at the time surrounding the film’s release and got people into the theater seats. For this list, we have focused on film posters, another external element of cinema that works as its own individual piece of art. Below are some of the greatest posters ever, made for films that, well… were disappointments, to say the least. 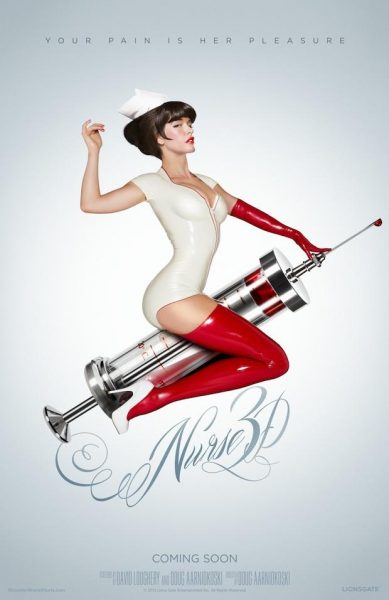 This film feels unnecessary. I think what it is trying to do is become one of those grindhouse flicks that were successful and popular in the 1960’s to the 1980’s. Sadly, the picture is backed by a lazy story, heavily cliched, and exists for the sake of existing. Advertising itself as a gory extravaganza, the violence, while present, isn’t effective in even the slightest way. Add to that some of the cringiest acting and annoying characters you’ve ever seen, and you have yourself ‘Nurse 3D’. I’m sure this would be a fun time with a lot of friends and booze, but otherwise, it’s pretty terrible. Rather intriguing poster(s) though. 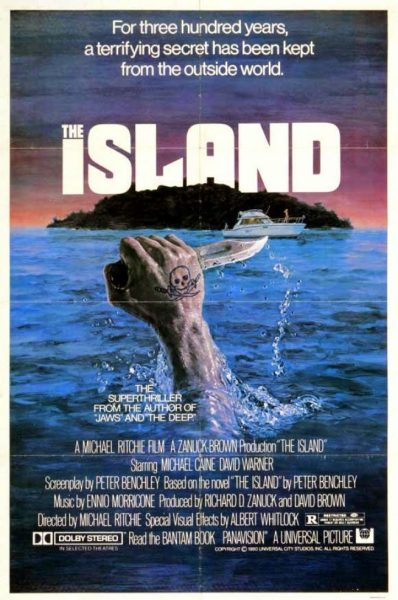 I remember my dad telling me that he had a lot of fun with this film when he saw it all the way back when it first hit theaters. There are a few out there who call it an underrated classic, but the general consensus seems to be that the movie is a poor adaptation of a rather interesting book, being completely far-fetched and illogical in its ideas, while also rushing through its maddening storyline. I agree with the general opinion, but I will say that though it is a film that invites a lot of eye-rolling, bits of it can be fun if seen in the right mood. The poster became quite iconic in the world of underground cinema, and has now become a great part of the film’s appeal. 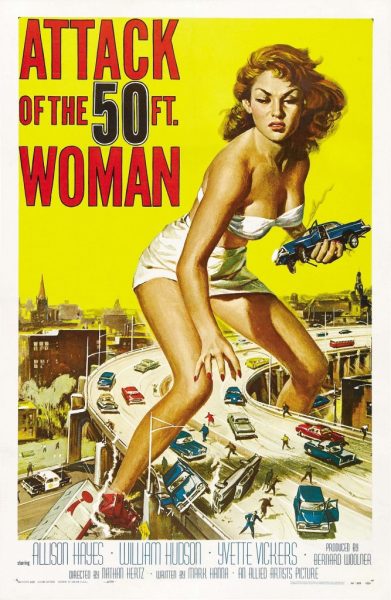 If someone were to ask me what I thought the most iconic film poster of all time was, I’d probably go with this one. It’s electrifying, massive, and dangerous. You know you’re in for an adventure when you’ve got a poster like this. Unfortunately, the film behind the poster is pretty bad. So bad, in fact, that it has become unintentionally good for many. While I have my own share of B movie favorites, I’ve never understood what stuck out about this picture. It looks different, and it feels different, but I don’t exactly laugh at it like I would do cringe over the many stupid moments that trample over each other in this big mistake of a film. 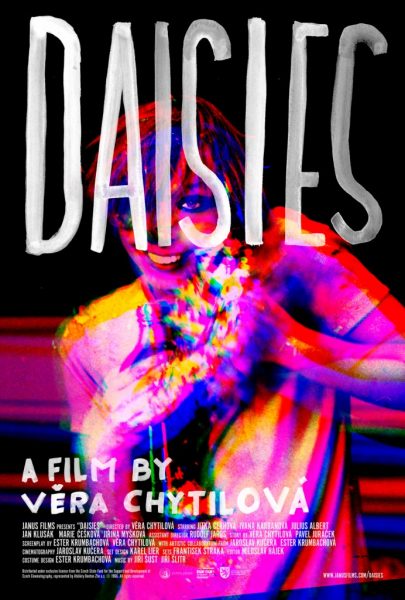 Oh man, is this film frustrating. It’s a directionless attempt at being psychadelic feature, but there’s just too much wrong with it that I honestly can’t call it good in any way. This is a bad film, an awful attempt at filmmaking, and has few redeeming qualities about it. I like what this film is aiming to do: bring philosophy and high-mindedness into a system of dimwits to see how they’d react. Daisies, to me, was so completely absurd that I did chuckle a couple of times due to the sheer madness I saw unravel on screen. Unfortunately, after a while this trick loses its spark, and it becomes uninteresting, something also brought on by the nonsensical nature of the events that take place, not aiding the film to have a structure. 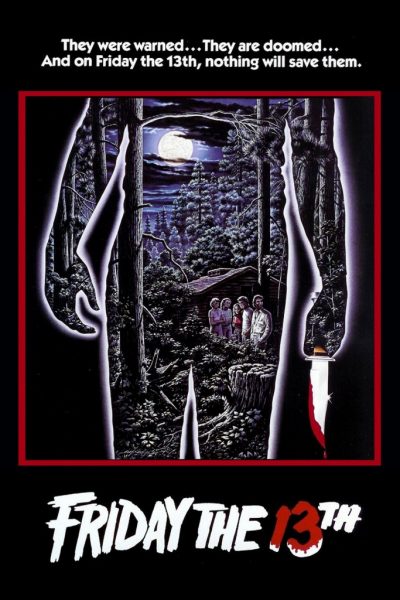 Friday the 13th has such a fascinating poster, artistically perfect, containing a hand-drawn image of our heroes within the outline shaped as the mysterious killer. The film, though, tries to be a horror feature but fails to scare its audience. The background score is so repetitive it’s hilarious, and the dialogues are extremely unrealistic that it’s almost hard to digest sometimes. The kills are funnier than they are terrifying, and the unintentionally campy atmosphere of this film completely ruins any of its attempts to incite fear. 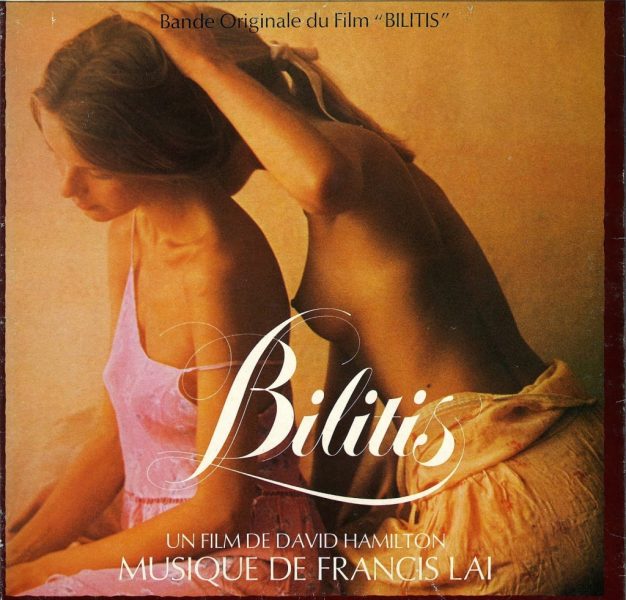 The original poster to Bilitis is iconic. David Hamilton, the film’s director, made sure that it’d be so, and used his background as a fashion photographer to shoot a picture lit and colored so very perfectly, just like the cinematography of his film. Unfortunately, though Hamilton took great pictures, storytelling really wasn’t his thing, and if not for his controlled visual style and Francis Lai’s impeccable score, I wouldn’t have been able to sit through this terrible excuse of a movie. The poster continues to be present in table discussions and conversations, something I feel it has deservedly received. 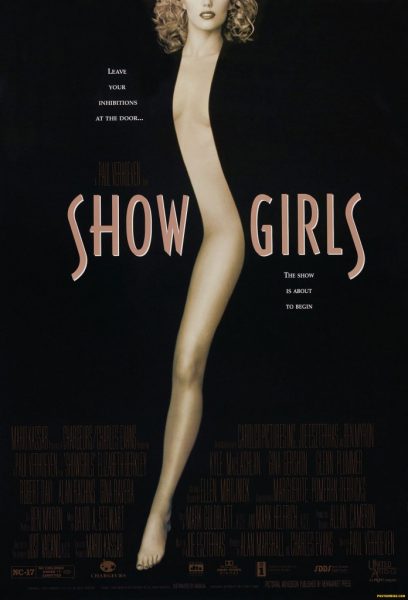 Paul Verhoeven’s 1995 endeavor was originally meant to be a satire, but it ended up being a showcase of unfocused filmmaking and bad acting. I would be lying if I said that I didn’t enjoy the film, because I find pleasure in quoting its awful lines and I’ve rewatched it more than 10 times now, mostly because it’s one of those bad movies that you just can’t get enough of. The poster of this film is great, it sets the mood of the film well, is seductive and inviting, which is probably one of the reasons why Showgirls ended up becoming the highest grossing X rated film of all time. 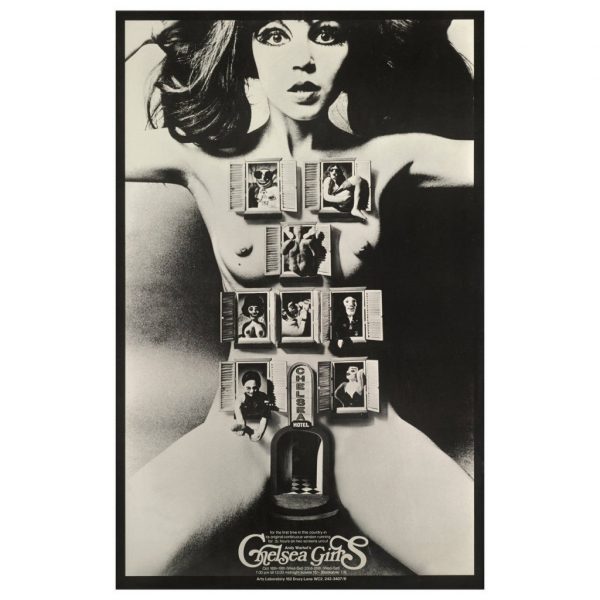 Talk about pointless. I’m aware that a good number of people regard all of Andy Warhol’s films as masterpieces that were ahead of their time, but more than half of this film’s viewers, including me, are of the opinion that it is overlong and pretentious. The film has characters we don’t care at all for, and a lack of a plot that is pretty maddening. Like most of his “classics”, this just seems to be Warhol and his crew playing around with a camera. While I appreciate that intent, it isn’t enough for me to appreciate the outcome, as a viewer and lover of cinema. The poster’s magnificent though, a little cheeky, a little naughty, and an interesting way to represent the film’s ideas. 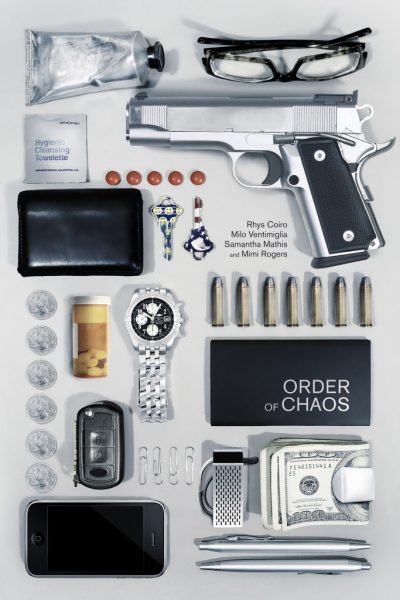 I love posters like this one, arranged in a compulsively systematic order, further pushing the title of the film. It baffles me, though, that the picture that comes along with this neat looking poster is terribly shot, to the point that the film becomes a chore to get through. With little to call redeeming aspects here, Order of Chaos lacks in every cinematic department that should work in order to make a crime thriller interesting, but nothing’s as bad as the character writing here. I never hated anything about this movie as much as I did its protagonist. 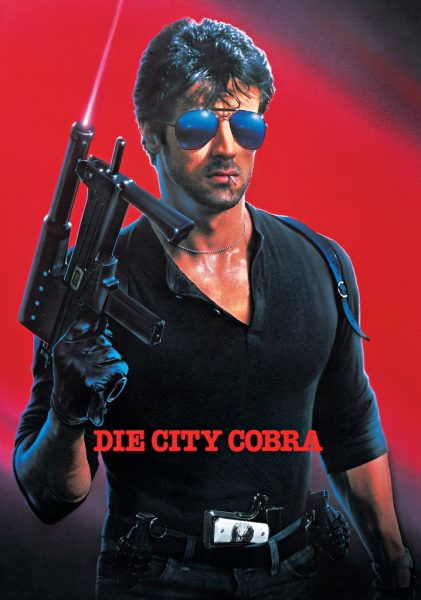 The ’80s were a time of macho action cinema, churning out a lot of great ones and a couple of copycats that were tiring and uninteresting. Cobra belongs to the latter category, and is worse than most in that lot due to its utterly boring climax and shallow storytelling overall. The dialogues are corny and forgettable, and the characters are irritating and unrealistic. I really like this poster though. It’s pretty cool, and gets you into the mood for an action film, acting as good bait then, I guess. Glad Stallone made better pictures following this in his career. 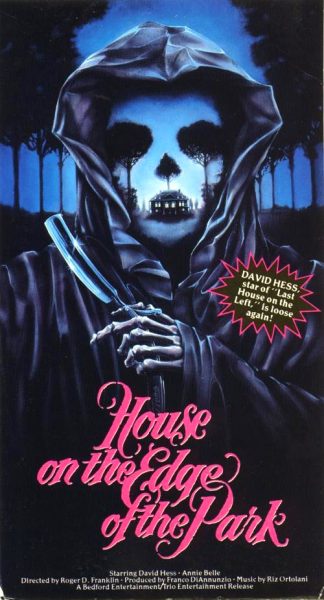 I don’t have to say much for you to get how good this poster is. Just take a look at that beauty, and revel in the way it creeps as well as intrigues with its artistic excellence. I must admit that I enjoy the final twist of this film, but that’s about the only interesting thing surrounding this boring drivel. One thing I’m noticing repeatedly on this list is the lack of good character writing. This film is perhaps the worst example of this. The characters are so uninteresting its kind of sad that a nice twist like that got sucked into a film as bad as this. 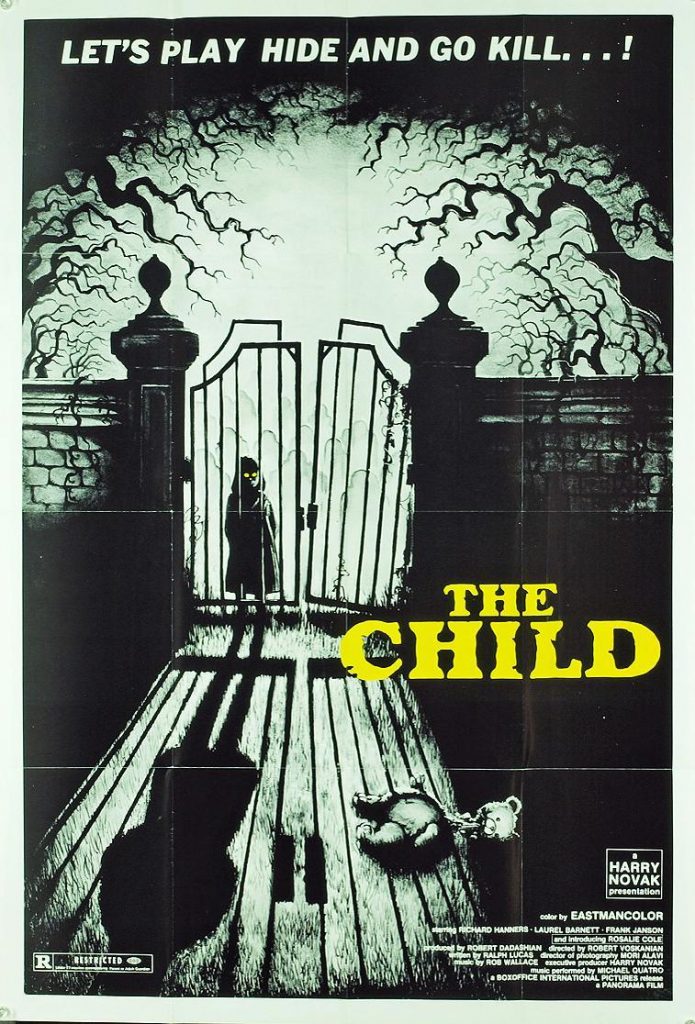 The Child could’ve been a lot better than what it ended up being. It has a fairly interesting plot and potentially good characters. Sadly, it wastes its time with its portrayal of a family that is so uninteresting that the longer they’re shown on-screen, the more you begin to despise them. The female lead portrays her character with one of the most disappointing acting roles I’ve ever seen in my life. The film has its moments, no doubt, but its story could’ve been easily done much better than it was handled here that I was wholly unimpressed by the effort (or lack thereof). 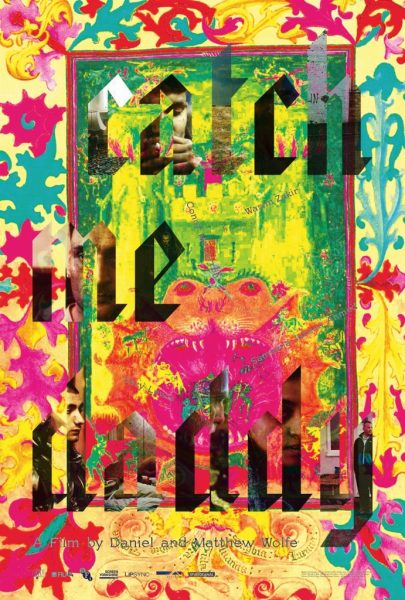 I adore the look of this poster, its lush use of color and the way it vibrates, with patterns that are just odd enough to be mesmerizing. It’s the type of poster I’d hang up on my wall, and I was intrigued to watch the film by this beautiful work of art. What I got from the movie was a story that had cardboard characters and unnecessarily exploitative storytelling. Its style felt as though it was pandering to little children, explaining everything in cheap, expositional detail and working about what could’ve been something great in as vanilla and unattractive a way as possible. 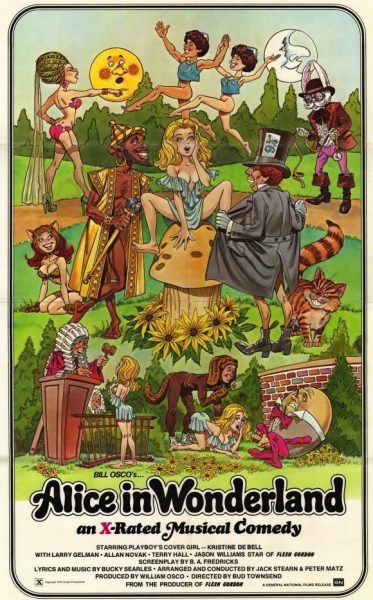 What you see up there is one of the greatest and most underrated movie posters of all time as well as a quick summary of everything you’re going to experience in this adult re-imagining of the popular kids’ tale Alice in Wonderland. I’m not going to look over the amount of effort that was put into this low-budget feature, because it is evident, but the film is so confused about what it wants to be that it ends up being everywhere, or at least trying to and failing miserably. Oh, and the jokes and one-liners are so darn cringy. 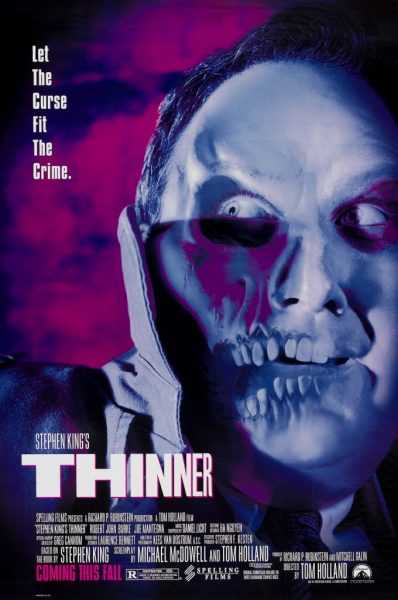 I’m a fan of the critically panned Tom Holland-directed Stephen King-adaptation of The Langoliers, which I thought was atmospheric enough to end up being a creepy experience. I couldn’t stand this film though. Holland ruins an interesting concept by providing no character depth at all (something this story was begging for) and makes it even worse with his weak handling of the story, one that ends up becoming more of a hilarious experience that anything close to tense and unnerving. If there was anything more terrible than the writing and direction here, its the atrocious acting, handled by professionals who are just doing their absolute worst.