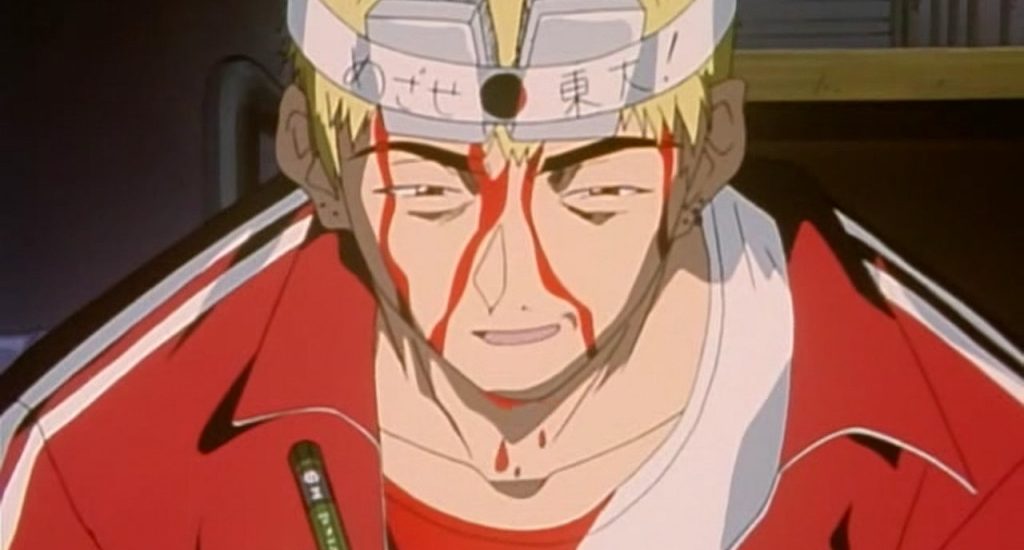 ‘Great Teacher Onizuka’ also referred to as ‘GTO’ is a combination of situational comedy and hard-hitting ideas that comment on the issues faced by modern Japanese youth because of the educational system. More often than not, if you mix two really contrasting ideas, the outcome is either extremely bad or you end up creating a masterpiece. In this case, ‘GTO’ tempers around the reality of some really serious social issues and it portrays this using some very raunchy comedy. What’s surprising is that it somehow manages to get away with it. Despite the two entirely different ideas it puts together, it turns out to be no less than a masterpiece.

But despite all of its perfections, ‘GTO’, though minor, has some flaws as well. One big problem is its English Dub which is something most comedy anime screw up. A lot of times, the whole context of a joke or situation entirely changes after it is dubbed to a different language. Only a few shows like ‘Gintama‘ are able to retain their comic value even after being dubbed but sadly, ‘Great Teacher Onizuka’ fails to do so. Another big issue with this anime is its art style that puts way too much emphasis on the expression of the characters. This may actually be favorable for certain comic situations but it gets really annoying later on. All in all, ‘Great Teacher Onizuka’ takes some tried and true concepts and then shoots them out with a very creative and fresh attitude to create a very enjoyable and funny show.

Great Teacher Onizuka Season 2 Release Date: When will it premiere?

Great Teacher Onizuka season 1 premiered on January 30, 1999 and ended with its run after 43 episodes on September 17, 2000. Since then, a great deal of talk about a second season of the anime has surfaced every now and then, and most recently online due to Fujisawa announcing his plans to resurrect the manga.

The last time we even heard serious speculations about a new series in the making was in the year 2014. It’s going to be almost 20 years since the series was published for the first time with no word about development of a second season. Therefore, it is quite understandable that fans are excited as the series is being resurrected. However, we are not that excited. It is important for the fans to realize that Fujisawa has revived the manga series several times in the past, this being his most consistent original work; but none of those ever got an anime adaptation.

These series take a lot of money to produce and if sales are not exactly high then it becomes very hard for the author to pitch the same to a producer. Hence, all things considered, it seems that the chances of us receiving a second season of the anime are quite low despite Fujisawa reviving the original source material. But then again, it is far too early in the development cycle of the manga to state anything with absolute confidence, so we just have to wait and see. If the response from the audience is good enough, then perhaps they might consider a reboot of the anime; but these are merely speculations at this point of time and entirely dependent on the initial sales of the manga. If anything changes or we hear about Great Teacher Onizuka season 2 release date, we will update that right here.

The English Dub of ‘Great Teacher Onizuka’ is available on Amazon Prime. You can also stream it on Crunchyroll with its original Japanese audio and English subtitles.

The main plot revolves around the life of Eikichi Onizuka, who is the protagonist and the title character of the series. Onizuka is a 22-year-old boy from Japan who is an ex-gang member and also somehow a virgin who is extremely frustrated with how things turned out in life for him. Now, to truly understand his previous life and endeavors, we have to delve into a separate manga series also written by Fujisawa but that is beyond the scope of this article. However, if you really do wanna read up on what Onizuka’s life was like prior to the starting of this series, then you will need to read through ‘Shonan Junai Gumi’ and ‘Bad Company’.

So, at this point in his life, Onizuka is extremely frustrated at not being able to lose his virginity and tries to devise various strategies that will get him laid. He is not successful with his plans and can be soon seen resorting to questionable methods in order to achieve his goals such as peeping up the skirts of young girls wearing short skirts. This method does work and soon he is able to meet a girl through this manner who agrees to go on a date with him.

While on a date with this young lady, Onizuka finds out that she already has a boyfriend and that she is unwilling to sleep with him. Using the best of his abilities, he is able to somehow get close to her at which point her boyfriend decides to show up. He notices that even though the boyfriend is comparatively uglier to her and quite aging, the young girl is extremely drawn to him to the point of her leaping out of the second-floor balcony into his waiting arms at ground level. He discovers that the man is a teacher, leading him to believe that teachers must have an extensive hold over their students for them to act in such a manner. Thus, from that moment on, he decides that he is going to be a teacher.

However, he soon finds out that being a teacher is actually not a very easy task and requires a considerable amount of effort in order to even pass the exam that will provide him with the necessary licenses. He decides to join a second-rate teaching college, where he learns all the tricks of the trade and acquires his license. Onizuka is soon recruited by a small-time privately owned school where he expects to find a lot of easy targets but is met by a class that is far from what he anticipated.

Having the reputation of driving one of their teachers mad, forcing another to join a cult and another to ultimately die, Onizuka now must now implement all that he has learnt from his college in order to tame the class and rid them of their rowdiness. He soon discovers that he needs to be extremely harsh and violent with the group in order to break through to their inner selves but he does so with the best of interests at heart. He also realizes that his morals do not allow him to take advantage of small children as much as he wants to, ultimately altering his goal to become the greatest teacher in the world while helping his students out.

Eikichi Onizuka: A 22-year-old virgin and an ex-gang member, Onizuka is extremely displeased with how his life turned out. The fact that he has no aim is presently foreshadowed by the fact that he has not been able to get laid and tries desperately to get a girl to go to bed with him. Having learnt that teachers have a good influence over their students, he decides to become one himself hoping that he will be able to utilize this opportunity to get in bed with one of his unsuspecting students. However, he soon realizes that his morals will not allow him to take advantage of others, especially his own students, and therefore decides to try to become ‘the greatest teacher ever’ instead.

Azusa Fuyutsuki: A female teacher who also works at the same school as that of Eikichi Onizuka, Azusa initially seems like an extremely normal character who has all the credentials that make up a good teacher. She excels in the languages department and can be seen teaching Japanese (English, in some renditions) to her students, who have quite a nice time with her, mainly the boys. She falls in love with Onizuka who is mostly intimidated by her teaching methods, much to the Suguru Teshigawara who feels that she can do much better than Onizuka.

Ryoko Sakurai: The director of the school and an extremely liberal personality, Ryoko truly believes that the teaching methods adopted by Onizuka will have a positive impact on the students in the long run. She can be found sticking up her neck and vouching for Onizuka’s actions even after several complaints put forward by other faculty members. She, later on, admits that the methods are not actually right and tries to explain that her skepticism is due to his manipulative nature.

Hiroshi Uchiyamada: Voiced originally by Yūichi Nagashima and by John Smallberries in the English version, Hiroshi Uchiyamada is the vice-principal of Holy Forest Academy and a legend among teachers. There are only two aims in his life and that is to look after his beloved Toyota Cresta (which he manages to crash quite frequently) and to get rid of Onizuka, who he believes has no right to be a teacher at his academy. He later changes his views about Onizuka after he realizes that he has been neglecting his regular duties due to his obsession with teaching.