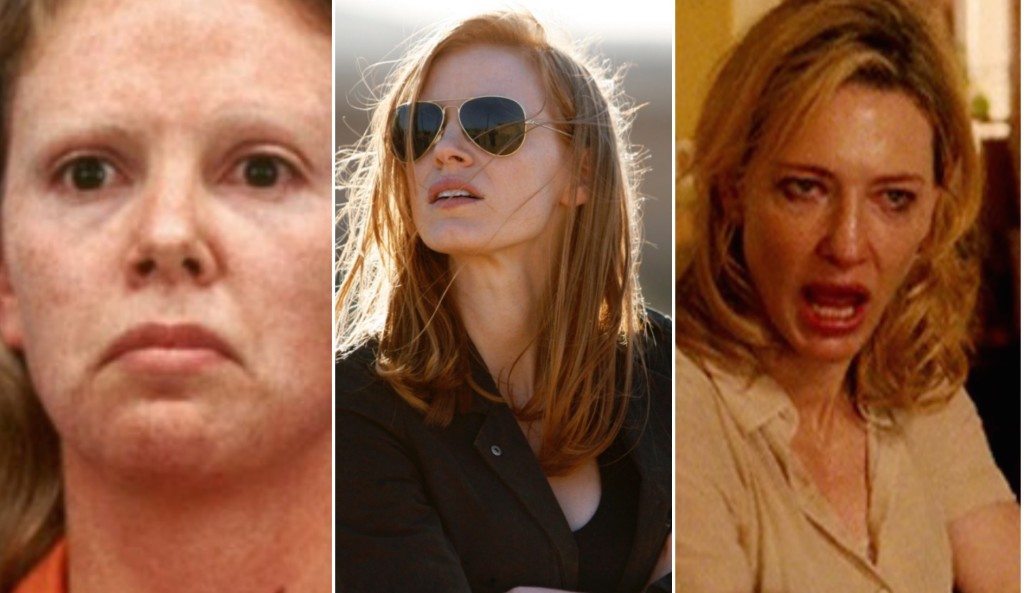 It is often said there are not enough great roles for women in Hollywood, but I disagree, after doing the research for this article. My short list topped eighty performances, whereas the men stopped at fifty one. Right now we have some of the greatest actresses in the history of the cinema, far more than at any other time. These woman have Katherine Hepburn, Jane Fonda, Ellen Burstyn, Jill Clayburgh and Meryl Streep to thank for that. With that said, here are the best of among the best:

1. CHARLIZE THERON in MONSTER (2003):  With her eyes blazing hatred for men, for mankind, with no empathy, most of all for herself, Theron gave the performance of several lifetimes here as serial killer Aileen Wuornos. Incredibly the actress digs deep enough to somehow make us care about this tragically abused woman who lashes out in unspeakable violence. An astonishing, brilliant performance. To gain a greater understanding of how tremendous her work is watch any one of the three documentaries about Wuornos and then watch this film. She goes beyond a mere resemblance, she captures her wounded terrifying soul.

2. ELLEN BURSTYN in REQUIEM FOR A DREAM (2000): Her long career coming to a close, Burstyn saved the best for last with this haunting performance as Sarah, a Brighton Beach widow addicted to television, addicted to candy, addicted to her memories of the past. Believing she is about to be on a TV game show, she becomes dangerously addicted to diet pills and her life spirals out of control, into a madness from which she cannot escape. Oscar blew it….

3. CATE BLANCHETT in BLUE JASMINE (2013): A modern day Blanche Du Bois, Blanchett is superb as this wealthy woman who loses it all when her husband is found to be the top gun in a ponzi scheme leaving her alone (he commits suicide) and flat broke. She cannot accept that and tries to weasel her way back into the world that now shuns her through deceit and lies. Desperate, tragic and lonely she never will as the truth lurks around each corner.  The last we see of her she is talking to herself in the street, forever broken.

4. MERYL STREEP in JULIE AND JULIA (2009): As Julia Child, the daffy cook who because she loved food, French food, decided to write a cookbook about French Cooking which became a best seller. Child then becomes a day time TV star, cooking her dishes for housewives across America, mistakes and all. Streep is hilarious for as she cooks she is trying to find herself, finding something that will define her.

5. JESSICA CHASTAIN in ZERO DARK THIRTY (2012): Intense, focused, her eyes betraying a deep intellect, Chastian is remarkable as the woman who found Osama Bin Laden in Pakistan which led to his assassination by Navy Seals. Devoting her life to finding him, knowing in her gut and through her research she is right, she goes toe to toe with her superiors including the head of the CIA to make this happen. Chastain deserved the Oscar….the Academy blew it.

6. GILLIAN ANDERSON in THE HOUSE OF MIRTH (2000): Who knew that Scully of The X Files was such a gifted and excellent actress….who knew…here as Lily she is a decent society woman struggling to find a place without a husband. Betrayed by her own kind, her life spins out of control till she hits rock bottom with no one, with the exception of one man who she will not marry as her friend. Anderson is heartbreaking and perfect.

7. JULIANNE MOORE in FAR FROM HEAVEN (2002): As the perfect wife and mother, in perfect fifties suburbia, with perfect friends, perfect clothing matched to the seasons, her world is shattered when she discovers her husband is a homosexual. Unable to discuss with anyone, lest her business become gossip, she befriends her black gardener and the two fall in love, though it is a love fiercely forbidden. Moore has never been better, and though nominated, well, you know.

8. KATE WINSLET in REVOLUTIONARY ROAD (2008): She won the Oscar in this year for her average performance in the woefully over appreciated The Reader (2008) when in fact she deserved it for her powerhouse work in this brilliant, under appreciated film directed by her then husband Sam Mendes. As a housewife who went to college to study acting, she is bored and wants to move to Paris, which her husband initially agrees to do, only to pull the rug out from under her and without knowing it destroys her.

9. TILDA SWINTON in WE NEED TO TALK ABOUT KEVIN (2011): Told in a broken narrative, we see the strange relationship between mother and son, and the manner in which the child wears her down and eventually destroys her with several acts of violence as a teenager. At one encounter she sits across the table from him, seething with rage at what he has taken away from her, yet just as angry at the ruin he has brought to himself. In a tough uncompromising movie, Swinton dominates throughout, and we both care and understand.

10. SANDRA BULLOCK in GRAVITY (2013): Listen to the break in her voice when she says…but Im going to die today — and you will understand why I so love this performance. Bullock is an average actress at best, but here with strong material, a great director and her own talents, which I badly underestimated, she is superb….just brilliant as an astronaut trapped in space after her crew is killed, and forced to find a way to get home. On screen in every single scene, Bullock is breathtaking in the role.

11. BRIE LARSON in ROOM (2015): Portraying a woman who has been captive in a ten by ten room for seven years, five of them with the son she bore after being taken off the street, raped and held prisoner, Larson broke through into the top ranks and won an Oscar. She is superb, be it scheming to get out, reasoning with a little boy who has never seen anything other than the four walls of the room, the wild look of panic on her face after escaping and then the deep depressions that falls over her, she is remarkable.

12. ROSAMUND PIKE in GONE GIRL (2014): Her stare seems vacant, yet speaks volumes of hate, geared towards her husband. We see it at the beginning of the film and again at the end, and he is trapped to live with her knowing she may come to him through the night and butcher him. Rarely has an actress captured a full-blown psychopath-sociopath on-screen as she does, and with what Pike does, she is terrifying.

13. ELLEN PAGE in JUNO (2007): Spunky and jivy, everything about her character was original, certainly partly due to the extraordinary screenplay by Diablo Cody but more I think by the character created by Page. Watch the almost shy and sad way she tells her parents she is pregnant, knowing the disappointment she is causing them, especially her father. And her strange connection with the surrogate parents of the child, realizing he is too much of a child to have one of his own. She is just wonderful.

14. AMY ADAMS in ENCHANTED (2008): Some might say, huh, is he nuts ? No I say. Watch the movie again, but pay attention to the early animated sequence and then watch Adams match the movement of the animated Gizelle throughout. She brings to life an animated character to absolute perfection, a simply remarkable performance. More so is the obvious joy Adams is having creating this character. A wide-eyed innocent awakened to true love.

15. MERYL STREEP in DOUBT (2008): Streep is outstanding as a strict nun who fills the hearts of her charges with fear when she merely looks at them. Yet, she is quietly vicious when she goes after a priest for his relationship with a boy who may or may have not crossed a line. In her mind he did so he is thus guilty and she will play jury, judge and executioner. Only at the end of the film does she realize what she might have done to an innocent man and her armour, given to her by the church breaks.