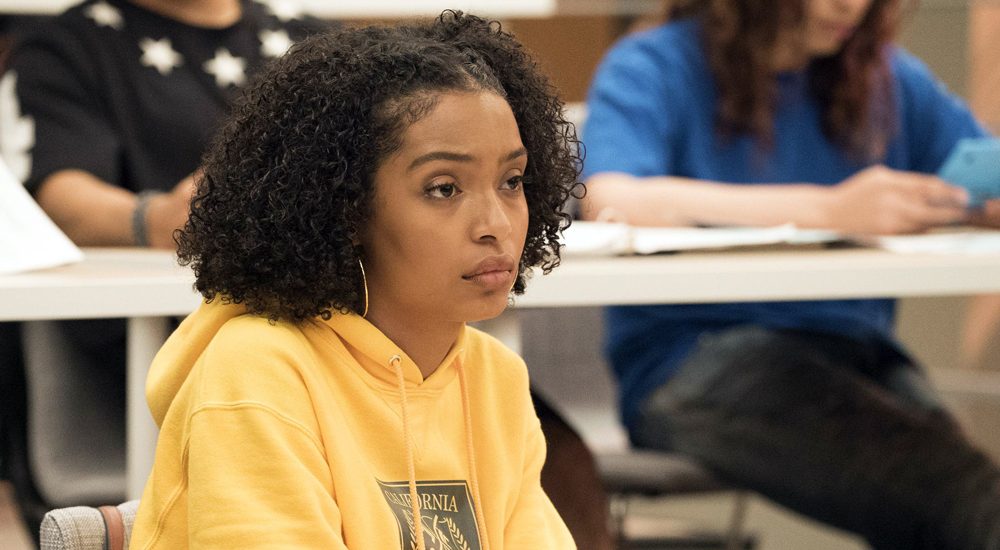 We have come to love ‘Black-ish’and the Johnson family. The show focuses on the complexities of an African-American family trying to fit into the world around them. The parents try to create a balanced environment for their kids, but the children learn from their own experiences. The eldest daughter of Andre and Rainbow Johnson is Zoey. She is a very focused and determined person, and in the third season of the series, her story branches out into a show of her own, called ‘Grown-ish’.

The spin-off series airs on Freeform and has received critical acclaim, just like its parent series. Through the story of Zoey, we get a look into the current scenario of college life. The most important theme of the show is growing up. With the children leaving the safety of their homes, how do they adapt to the new environment and what role it plays in shaping their character- these are the kind of questions that the show addresses.

wednesday’s the day. @dcyoungfly will be wildin' out on #grownish.

Creator and executive producer, Kenya Barris, explained how the two shows are very different from each other. “Grown-ish reflects what we’ll be dealing with in the show- that in-between place where you’re not quite an adult but facing grown world problems for the first time. Where ‘Black-ish’ examines what it means to be black, ‘Grown-ish’ is an examination of what it is and what it means to be grown.”

With Zoey moving to a new place, we wonder how different is it from her home? College life is pretty different from what she is used to. To bring her into this new environment an entirely new kind of set and filming location is required. If you have been wondering where ‘Grown-ish’ is filmed, here is the answer.

The Johnson family lives in the suburbs of LA. The family is so tight-knit that when the time comes for Zoey to make a decision about what college to choose, she is divided in her opinions. It is in the third season of ‘Black-ish’ that we see her toying with various ideas and wondering how much distance would it be okay for her to put between herself and her family.

She thought about NYU for a while, and from the looks of it, it seemed like she might actually choose the city on the other side of the country as her home away from home. However, in the end, she gave in to the allure of staying close to her family. This meant her choosing Cal U over NYU. Because Zoey doesn’t move far from home, she is still in LA, and what better place to capture the college life of a young girl than in Los Angeles itself. The city is the primary filming location for ‘Grown-ish’.

‘Grown-ish’ revolves around Zoey Johnson’s college experience and we spend most of the time with her in the campus of Cal U, the fictional university that she studies in. Because the show is produced by Disney, it gets the benefit of using the Disney Studios at Burbank, California as its home. This is also the place where the filming for the school of the Johnson kids takes place.

On set! 🎬 What a dream to be working at Walt Disney Studios today for #Grownish. Filming a hip hop party scene wit… https://t.co/xkbUAIaH6k pic.twitter.com/yWyokZXqnH

Most of the scenes in the show have been filmed in the studio, with the set-ups created for all scenarios, from her dorm room to the classes in college. The show is a rather livelier representation of college life, which would lead one to believe that the filming took place at real locations. However, much like its parent series ‘Black-ish’, ‘Grown-ish’ also relies on the craft of making sets out of scratch to deliver the wonderful settings for its story.

@joeybadass returns to your screens this thursday.