Halloween Freakshow Cakes: Everything We Know 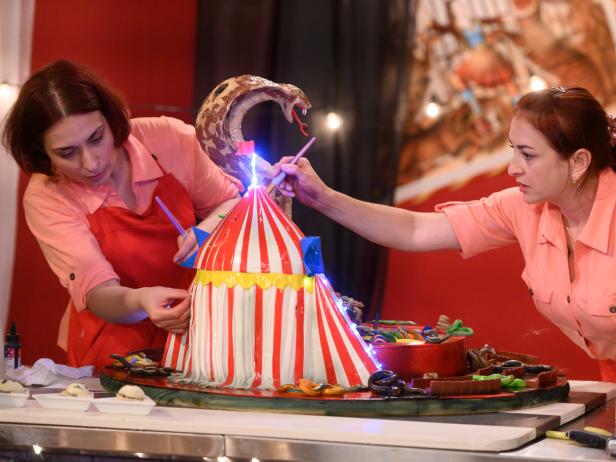 Food Network is at it again! Each year, the channel comes up with crazy, innovative ideas to commemorate the occasion of Halloween. And this time, it’s ‘Halloween Freakshow Cakes’! The October special event brings some of the weirdest, scariest, and freakishly delicious cakes to give you some mean ideas to up the fear + taste factor in your festive desserts. Want some more details? Well, we have you covered!

‘Halloween Freakshow Cakes’ season 1 releases on Sunday, October 18, 2020, on Food Network, at 10 pm ET/PT, with two back-to-back episodes. The four-part event wraps up with its third and fourth episodes on October 25, 2020 (starting at 10 pm ET/PT).

‘Halloween Freakshow Cakes’ is co-hosted by Food Network Kitchen’s Vivian Chan and pastry chef Zac Young. Young and Chan additionally double up as the judges. Chan is a Culinary Producer at Food Network and she serves as the host for the channel’s digital series, ‘Viv’s Tips’. She additionally creates stories for Snapchat Discover. As per Food Network, her motto is: “Do what you love, and you’ll never work another day in your life.”

Young, on the other hand, is the Pastry Director of Creaveable Hospitality Group. He had graduated from Walnut Hill School for the Arts and The Institute of Culinary Education. He has worked in multiple coveted brands like Bouchon Bakery and Alexandra Guarnaschelli’s Butter Restaurant. Ranked among the Top Ten Pastry Chefs in America by Dessert Professional, Young has previously appeared in ‘Unique Sweets’, ‘Beat Bobby Flay’, ‘Chopped’, and ‘Worst Cooks in America’.

What is Halloween Freakshow Cakes About?

Food Network has outlined the format of ‘Halloween Freakshow Cakes’ in its official synopsis: “Freakishly talented cake artists step right up to the sideshow tent to whip up Halloween cakes in a one-of-a-kind cake showdown hosted by Food Network Kitchen’s Vivian Chan and pastry chef Zac Young. The baker with the most wildly imaginative and hair-raising cake design wins $10,000 and the title of Halloween Freakshow Champion.”

In ‘Snake Charmer Showdown’, the bakers are tasked with imagining a scenario where a dangerous snake charming goes wrong. Later, the players are then required to bake a sideshow sweet treat, embedded with a surprising condiment. In ‘Flame Show’, the contestants have to curate smoking-hot cakes that draw inspiration from a fire breather. In ‘Misfortune Teller’, the bakers have to stretch their creativity to recreate an edible mystical fortune-teller. Finally, in ‘Creepy Clowns’, the chefs are tasked with making scary clown cakes that haunt kids and grown-ups alike. What’s more? The hosts cum judges also ask the bakers to bake concession stand sideshow treats!