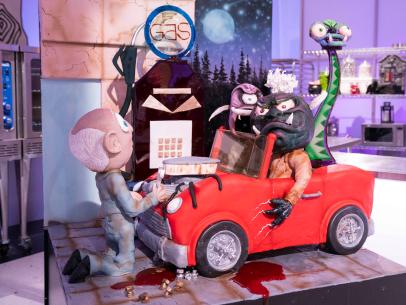 It is unfortunate that ‘Halloween Wars’ returns for such a short run every year. However, within this brief span, this Food Network competition does manage to leave us awestruck with some of the most amazing, spooky, edible creations. With only one episode left for the 10th outing to wrap up, we can’t help but wonder which team will bag the win this year!

This week, we see another trio being eliminated. And two of the remaining teams are one step closer to winning the grand cash prize of $50,000. We will come to the details later. But let us first discuss the release date and online streaming options for the 5th episode.

The upcoming episode is called ‘Look Out!’ For a detailed insight into what the episode entails, check out Food Network’s official synopsis: “Jonathan Bennett welcomes the two remaining teams of a pumpkin carver, cake artist, and sugar master to the spine-tingling final challenge. The team that can best capture all the terror and fun of the ultimate horror movie “jump scare” moment and impresses judges Shinmin Li, Todd Tucker, and actress Marisol Nichols will be crowned Halloween Wars Champion and win $50,000!”

In the 4th episode, host Jonathan Bennett is joined by Jocelin Donahue as the guest judge, alongside series regulars, Shinmin Li and Todd Tucker. In the Small Scare Challenge, the contestants are tasked with creating an edible version of a spooky self-portrait of themselves. The winners in this round are Candy Coroners — Amy McBride (cake), Chad Gainey (pumpkin), and Janet Barron (sugar). In the Spine Chiller Challenge, the participants are given an even more complicated task.

They need to create a scene, portraying claustrophobia. The chefs need to stretch their imaginations while depicting a scene that shows someone trapped with a monster. What’s more? They additionally require to incorporate a sticky, gooey treat. The final winners are Mummies’ Rejects — Daniel Miller (pumpkin), Hemu Basu (cake), and Steve Weiss (sugar). The eliminated trio is Candy Coroners. Therefore, the two teams proceeding to the grand finale are Crave Diggers – Jeff Taylor (cake), Eric Jones (pumpkin), and Joel Gonzalez (sugar); and Mummies’ Rejects.