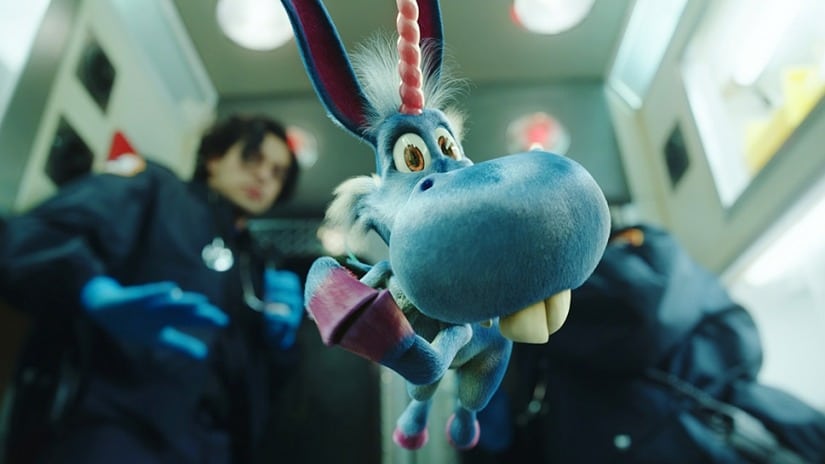 ‘Happy!’ is an American fantasy black comedy crime television series that airs on the Syfy channel. Created by writer Grant Morrison and artist Darick Robertson, the show is based of a four-part comic book series of the same name, which is also the creation of Morrison and Robertson, and it follows an injured detective-turned-hitman who befriends the imaginary friend of his kidnapped daughter.

A relatively new show, ‘Happy!’, consisting of eight episodes, first premiered on December 6, 2017 and ran up to January 31, 2018. Following its release, Season 1 of the show received great reviews and responses from television critics and audiences alike, prompting Syfy to renew the show without delay. Season 2, subsequently, premiered on March 27, 2019, and received even better reviews than Season 1. Now, fans of the show are wondering whether ‘Happy!’ will return with a third season. Here’s everything we know about it thus far.

Being an adaptation of a comic book series, ‘Happy!’ has a fairly long list of main cast members.

Leading the pack is Christopher Meloni in the role of Nick Sax, a detective-turned-hitman who is an alcoholic and never short on cynicism. Patton Oswalt, meanwhile, voices the titular character Happy, who is a goofy, blue, cartoonish winged unicorn.

As far as recurring cast members are concerned, the show has several. Debi Mazar plays Mr. Blue’s sister and the mother of four Scaramucci brothers who Nick guns down. Michael Maize steps into the shoes of arms dealer Le Dic, while Dante Pereira-Olson plays Mr. Blue’s son Gerry Scaramucci. In Season 2, Ann-Margret Olsson joins the show as Bebe Debarge, as does former WWE superstar Big Show, who plays the role of Big Pink.

Happy! Plot: What is it about?

The show follows disgraced police detective Nick Sax, who is shown to be a cynical alcoholic living his days as a social outcast and moonlighting as a hitman to finance his terrible habits. Nick’s decadent way of life, however, is completely disrupted when he suffers a massive cardiac attack. After he recovers, he starts seeing a goofy, blue winged unicorn called Happy, who explains to Nick that he is the imaginary friend of a kidnapped young girl called Hailey Hansen. Happy also tells Nick that Hailey is his estranged daughter, thus forcing Nick to take a decision on whether to act and save Hailey, or slip back into his habits. Nick, being the cynic that he is, disbelieves everything initially, but eventually agrees to save Hailey with Happy’s help.

Much of the first season is devoted to Nick’s search for Hailey and the multiple obstacles he faces along the way. The rest of the season follows the story arcs of other characters, particularly Mr. Blue, and develops them for future seasons. Without giving you too many spoilers, we can tell you that the first season ends with Nick tracking down Hailey’s kidnapper, Very Bad Santa, and saving the young girl from being lobotomized by the psychopath. In doing so, the first season covers the source material from the Happy! graphic novel, so from the second season onward, the show is expected to take its own direction.

Commenting on the same, show co-creator Grant Morrison had earlier told ComicBook.com, “I think what we set out to do was really touch on a wide range of emotional stuff, which is quite different from the comic. That’s what made the two of them [the comic and the show] feel like different beasts even though they share a lot of the same points. I think we really had to expand out that world and build out mythology and add a whole bunch of new characters. That’s what made it interesting; it’s not so much a one-to-one correspondence, but it managed to capture the mood and the energy and the feel of the comic.”

The second season of the show is set during Easter, and follow’s Nick’s life in the aftermath of the events of the first season. It starts off with Nick trying to reform his life with Happy’s help, but despite Nick’s efforts to lead a normal life, he is drawn into the sinister world of crime once again by unforeseen events. Mr. Blue, meanwhile, hatches a sinister plot of his own. Since the second season has not finished airing yet, we are yet to see how it shapes up.

In terms of reception, ‘Happy!’ won a lot of hearts among television critics, and Season 1 of the show was given a Rotten Tomatoes score of 80%, with the critics consensus reading, “Happy! certainly isn’t for everyone, but its appealingly oddball concept and strong performances from Chris Meloni and Patton Oswalt make for a gritty, dark comedy with definite — albeit unusual — appeal.” Season 2 made an even bigger, splash, and enjoys a perfect score of 100% on Rotten Tomatoes. Among viewers, too, ‘Happy!’ has won a lot of hearts, and it enjoys a solid overall rating of 8.3/10 on IMDb, based on over 20,000 votes.

Happy! Season 3 Release Date: When will it premiere?

‘Happy!’ season 2 premiered on Syfy on March 27, 2019. As far as the next season goes, we have bad news for the fans. On June 4, 2019, Syfy announced the cancellation of the show. Considering the declining viewership of the show, it was expected that Syfy may not continue for another season. Though, fans should not lose all their hopes. There’s still a possibility that some other network picks up the show. If that happens, we will update you about ‘Happy!’ season 3 release date.

While we wait for any positive news on ‘Happy!’, here is the trailer of Season 2 to give you a glimpse into the show and the story thus far.