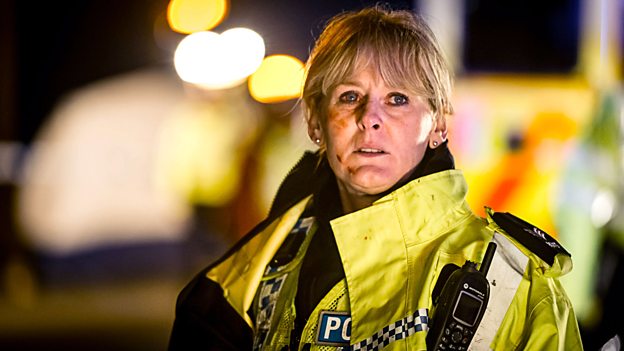 ‘Happy Valley’ is a British crime drama that airs on BBC One, having first premiered on April 29, 2014. The show is set in the Calder Valley, West Yorkshire, which is in Northern England. Sally Wainwright is the brains behind the series, having created and written it.

The series takes a unique look at the life of the protagonist, Catherine Cawood, a police sergeant. Although the tale starts with her being on duty, while a crime is reported at her station, it soon takes dark turns. ‘Happy Valley’ is not afraid to take us deep into the criminal underbelly, showing our gallant protagonist’s attempt to serve justice. That being said, the series definitely stands out for portraying how crime might happen to affect the personal lives of the very people who are out fighting it each day.

Soon after Season 1, the show followed up with a second season, which is not surprising since ‘Happy Valley’ won the BAFTA Award for Best Drama Series in 2015. However, since then a third season has been in development. Naturally, you must be wondering what is taking it so long and whether ‘Happy Valley’ will end up getting Season 3 at all. Well, we are here to answer your queries as bring you everything we know about ‘Happy Valley’ Season 3.

Happy Valley Cast: Who Is In It?

The cast of ‘Happy Valley’ is led by Sarah Lancashire, who plays the role of Catherine Cawood, the police sergeant. Other cast members include Siobhan Finneran, who you might recognize from ‘Downton Abbey‘, in the role of Clare, Catherine’s sister, and Rhys Connah, who plays Ryan, Catherine’s grandson.

Over the seasons, there have been other characters whose lives have tangled with Catherine’s as she goes about her duties as a cop. These have included kidnappers, kidnapping victims, other police officials, and murder victims. However, it would be impossible not to note the looming figure of Tommy Lee Royce, played by James Norton of ‘McMafia‘ fame. Royce is Ryan’s father and happens to be a criminal. His presence is as intensely felt as his absence in ‘Happy Valley’. It is easy to see how he is a corrupting influence, in Catherine’s personal and professional life.

Season 2 of the show also introduced us to a new teaching assistant who Ryan grows close to. Shirley Henderson plays the part. The actress has some major works under her belt, like ‘Trainspotting‘ and ‘Okja‘, but you might recognize her as Moaning Myrtle of the ‘Harry Potter‘ series. Henderson’s character is a prison groupie secretly. Since she is obsessed with Royce, Ryan’s father, the criminal dad uses her to try and build a connection with his son. Seeing how she is in a pivotal role, Season 3 could very well see Henderson reprise her part as the teaching assistant.

Other characters who are expected to return in Season 3 are Lancashire’s Cawood, Norton’s Royce, and Connah’s Ryan. Finneran might be reprising her role as Clare as well.

Happy Valley Plot: What Is It About?

‘Happy Valley’ tells the tale of Catherine Cawood, a determined police sergeant in West Yorkshire. She lives with her sister, Clare Cartwright, having divorced from her husband. Catherine is plagued with nightmares as she tries to cope with the suicide of her daughter, Becky, which took place eight years before the events of the series. Cawood helps Becky’s young son, Ryan, to grow up with affection. However, Ryan happens to be a child born out of rape, which makes his life complicated since Catherine’s ex-husband and her older son want nothing to do with him.

Things soon take an exciting turn, when Catherine learns that Ryan’s father, Tommy Lee Royce, is out of prison after having served time for drug charges. She becomes obsessed with finding Royce, unaware that he is part of a kidnapping plan as well. As Catherine stumbles upon the kidnapping plot, events begin to take a dark turn because the kidnappers are forced to hide their moves and react violently.

The plot moves forward by eighteen months in the following season. We see Catherine back at work and receiving praises for saving the kidnapping victim in the first season. While Catherine has won the Queen’s Police Medal (QPM) for her gallant actions, we see that Royce is serving a life sentence in prison. The situation does not take much time to deteriorate as Catherine becomes implicated in a string of killings when Royce’s mother is found murdered. As the cop is forced to prove her innocence, she also has to investigate a human trafficking case linked to serial killings. Making matters complicated is the fact that Ryan makes a new friend at school, who happens to be obsessed with Royce. Despite the courts forbidding the latter to have any contact with his son, Royce sets about trying to build a relationship, in order to get revenge on Catherine. Ryan’s behavior starts to shock and concern his family when he begins to ask questions about his father and suggests that Royce should be forgiven. The season ends with Ryan writing a letter to Royce in prison.

Season 3 will definitely follow Ryan and Royce’s relationship, perhaps showing the former as a teenager. The idea is to show how Royce is flooding Ryan’s veins, affecting his perspectives on his life and family, no matter what Catherine tries to do about it. While this is the situation on the personal front, Catherine’s professional front will most likely see her tackle yet another tough case as an agent of the law.

Happy Valley Season 3 Release Date: When Will It Premiere?

‘Happy Valley’ Season 2 premiered on February 9, 2016 and came to an end on March 15, 2016. The good news is that Season 3 has already been renewed and is underway. In case you are wondering about why it is taking so long, actress Katherine Kelly, who plays Detective Inspector Jodie Shackleton in Season 2, stated that Sally Wainwright is waiting for Ryan, Catherine’s grandson, to grow up more.

Instead of casting a new actor to show Ryan’s teenage, the idea is to let Connah continue when he has grown up naturally, to portray a teenager. Thus, you can expect ‘Happy Valley’ Season 3 to come out sometime in early 2021. We will keep you updated on any official news in this regard.

‘Happy Valley’ Season 3 does not have a trailer yet, but you can check out the trailer for Season 2 in the meanwhile.

Doubling Down With the Derricos Episode 2: What’s in Store?

When Will Adam Ruins Everything Return to truTV?

Who is in Jason Mesnick’s Family?