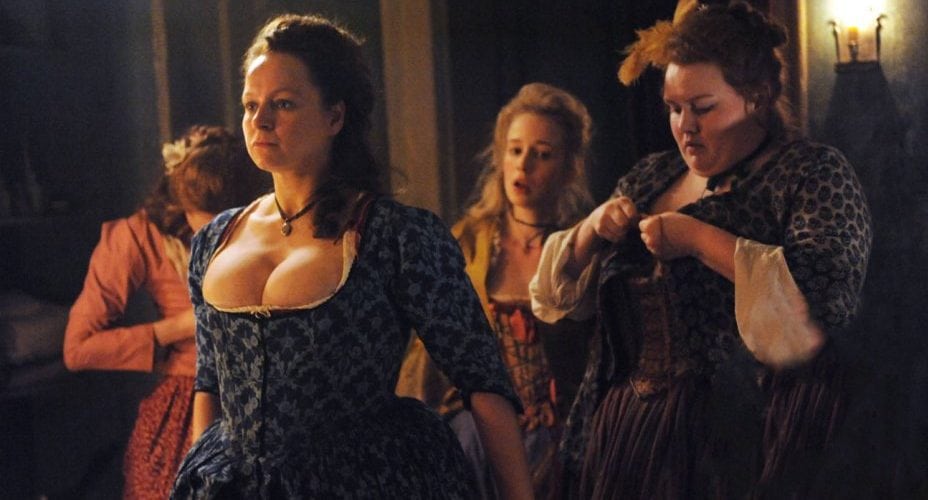 ‘Harlots’ is probably one of the only British shows on television right now that has such an expansive and talented all-female cast. Led by Samantha Morton, ‘Harlots’ explores the convoluted and highly misogynistic and patriarchal social setup of the 1800s and at the center of it all the most commercial activity: sex. The show quickly garnered a strong fan base due to the kind of content. Critics praised it as well, saying that the series only used the titillating subject to draw in viewers, but actually went with the portrayal of a drama where family, survival, and business, all intersect.

Harlots Cast: Who is in it?

The cast of ‘Harlots’ is led by Samantha Morton as Margaret Wells, a madam running a low-class brothel. Lesley Manville plays Lydia Quigley, a madam of a high-class brothel that services the elite. Jessica Brown Findlay plays the role of the eldest daughter of Samantha, and also a prostitute. Eloise Smyth stars as Lucy Wells, the youngest and favored daughter of Margaret Wells who is a reluctant sex worker. Dorothy Atkinson plays Florence Scanwell, a religious zealot who opposes sex work. Kate Fleetwood plays Nancy Birch, a longtime friend and neighbour of Margaret Wells.

Alfie Allen who is famous for playing Theon Greyjoy on ‘Game of Thrones, and Ash Hunter joined the cast for season 3. They play the roles of Isaac and Hal Pincher, the mercurial and level headed brothers, who want to achieve wealth, power, and gain control through their pimping business which is always expanding.

All the main cast members are expected to return for season 4, if and when it happens.

Harlots Plot: What is it about?

With the Industrial Revolution, we saw alienation creeping into society for the first time, as work and family became separate entities, and there were mass exoduses to cities. In such conditions, where men groveled each day, these harlots came out and provided their only escape from reality, through a simulation of compassion and affection, which validated their beings. At the same time, these harlots too have to think of themselves, and the streets can be difficult and dangerous for a woman in the sex trade.

‘Harlots’ is set in London of the 1800s when business is booming thanks to the Industrial Revolution. If business booms, the world’s oldest profession must be booming as well, that is prostitution. Numerous women are in the business of selling sex, since the only way for socio-economic upliftment is a life of prostitution, or to marry well, and not everyone can marry well. The city’s brothels are run by canny and determined businesswomen, such as Margaret Wells and Lydia Quigley. The entire plot is propelled by Wells’ desire to better her financial stature and move her business to a better neighborhood. This puts her in conflict with Quigley. At the same time, the winds in London carry a puritan fervor as some crusaders demand the shutting down of these establishments, and the law enforcement seems more than happy to oblige.

Season 4, if commissioned, is expected to continue showing the struggle of Wells, as she tries to keep her business alive and thriving.

Harlots Season 4 Release Date: When will it premiere?

‘Harlots’ Season 3 premiered on July 10, 2010. As far as the next season goes, we don’t have an official announcement yet. Though considering the popularity of the show, we are pretty sure it will get renewed for another season. And based on pattern of the release of previous seasons, it is expected that ‘Harlots’ Season 4 will release sometime in July, 2020. We will update this section as soon as we hear more.

Should You Watch Harlots?

Definitely yes. What stands out about the show is how it portrays sex work and still manages to make it a tale of feminism. The risk that shows like this run is twofold. Either, they can sexualize the people to the extent that the male gaze prevails, and ultimately the tale of feminism is lost, so much so, that the characters are objectified completely. Alternately, they can make every narrative arc as one filled with misery, which becomes cliched as well. However, ‘Harlots’ does a bold job of balancing the two, keeping things titillation intact, while telling a gripping tale. History fans will also take to the show for its detailed portrayal of London. However, the social condition outlined is the best takeaway that the show has to offer.

Variety sums up the show perfectly, saying how unsparing it is and how it treats the personal tragedies of these women with compassion: “To her credit, showrunner Moira Buffini does not eschew complication — the lower-class prostitutes include black and Asian women, reflecting how the margins of society saw racial mixing much farther back than is commonly believed…The show is engaged with racial diversity and abolition, as political issues of the day that would get filtered down even to the hookers and hawkers of Cheapside. But best of all, it exposes a side of history unseen and under-told — the raggedy underside of humanity, just a couple of miles from where King George III ruled the nascent British empire.”

It is also a tale of how the working class stakes their claim on a city that appears to be run by those with power and privilege. In the upcoming season, the madams will have to compete with pimps, who bring their own brand of ruthlessness, and we expect it to be as riveting as the past seasons have been.

While we wait for season 4, check out ‘Harlots’ Season 3 trailer here. We have also attached a trailer for Season 2 below.