Will There be a Harvey Girls Forever Season 5? 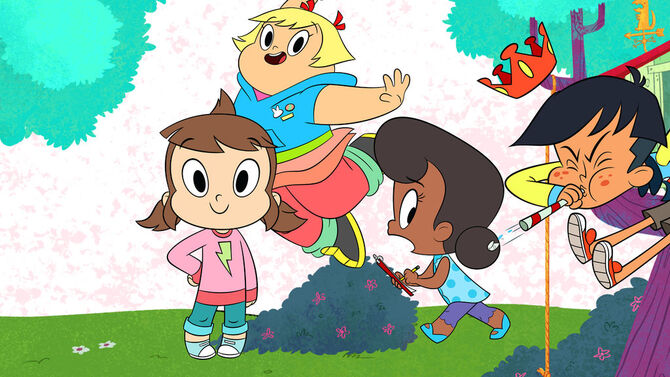 ‘Harvey Girls Forever!’ is an animated TV series, especially aimed toward lower kindergarten kids, which is developed by Emily Brundige. The Netflix original premiered on the streamer on June 29, 2018. As the name makes it apparent, it follows the various adventures of the Harvey Girls, Audrey, Lotta, and Dot, self-appointed guardians of Harvey Street. They are always on the lookout to set things right and make everything fun and peaceful in their neighborhood.

From partaking in ball games to climbing trees and exploring the nooks and corners of the vicinity, this trio of girls indulges in multiple quirky quests. Each episode makes it seem like life is a never-ending vacation. Along the way, they also need to ensure that the residents on the street are safe. While fixing wrongs and embarking on adventures, the Harvey Girls make sure that their bond grows stronger and closer with time.

Season 4, which landed on Netflix in January 2020, introduces yet another set of crazy exploits. Audrey, Lotta, and Dot save the bazillionaire Future Richie Rich, who makes a comeback after regretting his departure from Harvey Street. There’s also an appearance from the ‘very scary!’ tv ghost Casper in one episode. The kids also indulge in a game of Raiders of the Lost Ark, form a robot band, play hooky with the Bloogey Boys, do a ripoff of Dora’s Pirate Adventure, come face to face with Blaze Trickle, celebrate Hanukkah, and shoot off fireworks, and Maria celebrates her sixteenth birthday at Dunkin Boba!

Toward the end, we come to know that Lotta is leaving Harvey Street forever — something that calls for an epic dance party! Quite an emotional ending for fans, we must say. Hence, we want to know if the show will return. In other words, will there be a ‘Harvey Girls Forever!’ season 5? Let’s dive right into that!

‘Harvey Girls Forever’ season 4 premiered on January 10, 2020, in all its entirety of 13 episodes on Netflix.

Well, it seems season 4 is indeed the last we will see of our girls. Although Netflix has not made an official announcement yet, executive producer Brendan Hay tweeted on January 6, 2020, that this would be the final season from the series. Here’s what he said:

PS: If you're in the media and want to talk to @alikigreeky, @PeterJEmmerich, myself, or any of the other #HarveyGirlsForever crew about our new, final season, please reach out!

When a shocked fan asked, “Wait… Final?!”, Hay replied: “Yup, this Friday is our last batch of episodes. Pretty great season, thankfully, with a proper finale.”

So, there you go. It seems we can safely assume that ‘Harvey Girls Forever!’ season 5 officially stands cancelled.

But before leaving you on a dejected note, you should know that there have been rumors of the cartoon making a comeback with an epilogue in order to say a proper goodbye. We have also heard that it will premiere sometime in 2020. But nothing is sure until we receive an official update. Until then, bookmark this page as we will be revisiting it as soon as we come across more solid news.