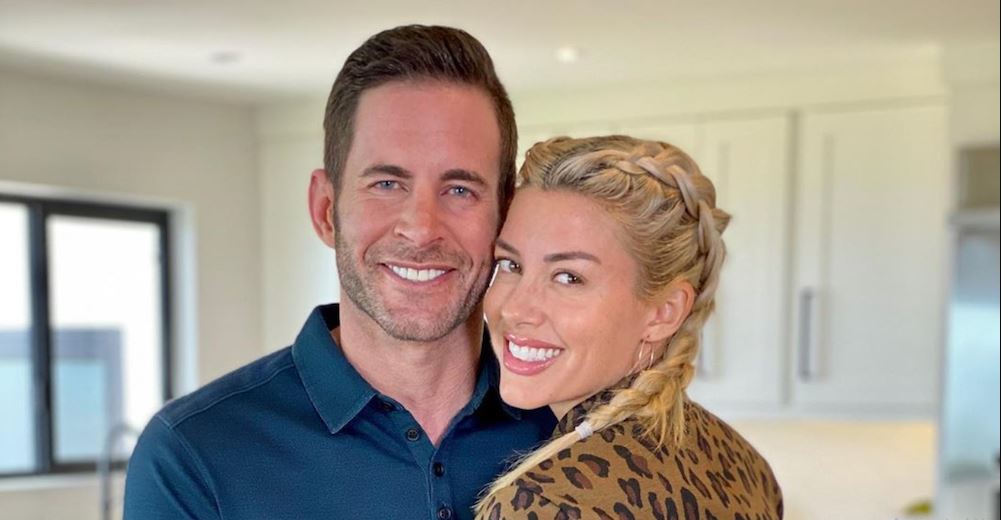 When ‘Selling Sunset’ first came on our screens, we just assumed that it could be a dull reality show about real estate that sometimes showed us the lives of the women who worked at The Oppenheim Group. But, boy were we wrong, and thank god for that. Instead of just monotony and lavish homes, what we got was glamorous lifestyles and a ton of drama. Of course, the multi-million dollar mansions are still a big part of it, but most times, that’s on the backpedal. Personal relationships, like that of Chrishell and Justin, and between the group itself, is the main selling point of the series. Therefore, it’s no surprise that even though we didn’t see Tarek on the show, we got the scoop of his and Heather’s relationship.

Heather Rae Young and ‘Flip or Flop’s‘ Tarek El Moussa, met on the Fourth of July in 2019, soon after she had broken up with her hockey player boyfriend, Nick. Mutual friends and chance had brought them together to Newport Beach, California, that day, where their boats had happened to be docked side by side. When one of Heather’s girlfriends ended up on the boat that Tarek was on, she found herself there too, and then, it was love at first sight. As soon as they started talking, they both realized that they had a connection, so when Tarek proceeded to ask her out for drinks, she, of course, said yes!

Exactly one year ago today, @heatherraeyoung and I decided to be exclusive during our second date! . Less then a week after our first date, we moved in together and never looked back! . I’ll never forget the first time I saw her, it was the 4th of July 2019. . On July 3rd, I was a lost and broken man. If you asked me about love I would have answered “not for me” . July 4th was different. It was the last thing I ever expected but I met the love of my life. The second our eyes connected and we smiled at each other I knew my life would never be the same. . She is incredible in every way possible and most importantly she loves and adores Tay and Bray. . @heatherraeyoung I just love you to the moon and back. You are my everything and you complete me. I’d be lost without you ❤️❤️❤️ . HAPPY ONE YEAR ANNIVERSARY MY LOVE!! . . Now tell the truth…did you think we were gonna make it🤷‍♂️😎? .

By their second date, they were both “100% committed” to their relationship, and by their fifth, they had said “I love you” for the first time. On July 28, by being photographed kissing and cuddling on a yacht, they made their romance public. And, in early August, they confirmed their relationship to the world by posting about it on Instagram. Unlike most whirlwind romances, though, fortunately, theirs only picked up. Within a short while, Tarek introduced Heather to his kids from his previous marriage, and together, they became a family of their own.

About 10 months ago on date #2 @therealtarekelmoussa and I decided to commit to each other 100% that meant me committing to his babies 100%. There was never a question in my mind it just felt right. I’ve learned more patience and kindness and to be more selfless. – A “title” does not define a relationship or who we are and it Does not define Love. – Thank you @therealtarekelmoussa the best daddy for trusting me to love the babies & bringing joy & love that I’ve never felt before. I am so grateful for my life. – Happy Mother’s Day to all the moms, step moms, and bonus moms! ❤️

What’s even better is that Heather also managed to form a civil relationship with Tarek’s ex-wife, Christina Anstead. A big part of this is the fact that she has stepped up to take care of their kids, and is ensuring that they were well cared and provided for, so much so, that she prioritized his daughter’s 9th birthday before work. Although Tarek’s living in Orange County did create some issues for the couple, that got solved when they decided to move in together. And, as we heard in Season 3, Heather is more than ready to take the next step with him.

I know you guys have been waiting to see it!! A tour of our new beach home for the rest of the year! – Earlier this year @therealtarekelmoussa & I sold his “dadchelor” pad. I represented him in the sale, we got multiple offers and it sold very quick. So we were left searching for a home quick. We found this summer beach house & fell in love with it. Making new memories together in our new home. – Welcome to our home!!! Come on in and take a tour with us and @people @peopletv

Are Heather and Tarek Still Together?

Yes, they are! In fact, Tarek has made Heather’s wishes came true after all. As if buying Heather her dream car – a white, hard-top Ferrari convertible – for her 32nd birthday, or getting a place together in California wasn’t enough, after only a year of being together, Tarek proved just how much he loved and appreciated his girlfriend by getting down on one knee and proposing to her. He did this in an incredibly romantic setting; by the beach and surrounded by candles and flower petals. Heather had any idea. Of course, she knew that they were going to get engaged and married – they had talked about it and she had dropped hints – but it seems like she had no idea exactly when it was going to happen.

The future Mrs. Heather Rae El Moussa!!! 💍❤️ This was the best day of my life!! This moment when @therealtarekelmoussa got down on one knee & asked me to spend the rest of my life with him. SO much to tell you guys, I’ll give you the inside scoop throughout the next few days on how I was feeling throughout the weekend . – He kept everything a secret from me. I knew he had little surprises throughout the weekend, but I thought he was just being extra romantic for our one year. Little did I know he had been planning to propose. I couldn’t see anything as I was walked down to the beach. There were cabanas lined up covering everything. I was rushed around the corner to what I thought would be a dinner on the sand. But when I walked around the corner Tarek was standing there looking so handsome in his tux. I was confused for the first 15 seconds as I walked down the gorgeous candle & flower aisle wondering what the heck is going on. Then I thought OMG is he proposing??? No way!!!! But in my head I talked Myself out of it thinking well I bet it’s earrings!!! I didn’t want to get my hopes up. More to come tomorrow!!!!! I can’t wait to marry you @therealtarekelmoussa ❤️

The couple isn’t shy about dishing all the details to us on Instagram either, so we know for a fact that Heather’s beautiful ring is an 8-carat diamond that was imported directly from Europe. Even Tarek has opened up to say that he had planned every little detail to surprise Heather and went above and beyond to make sure that it remained hidden. Honestly, we can’t wait to see how they move forward now. (Featured Image Credit: Instagram / Heather Rae Young)

This was right before the big surprise last weekend!! . I was trying to distract her from the proposal so I kept us running around and busy all day! . We were able to rent the spa for the day and had lunch and drinks by the pool. . It was a ton of fun and we filmed it so I’m so excited for everyone to see the footage! I’m telling you…I totally surprised her! . Today is a lazy day and we are binging season 3 of Selling Sunset releasing this Friday! . How is your weekend? Anyone excited for the new season of selling Sunset? .

FINALLY I can show you my insane stunning ring that my love @therealtarekelmoussa chose for me to wear for the rest of our lives!!! – Our good friend Benny @bennyandthegems helped Tarek in the hunt for the perfect stone. He chose an 8 carat (because 8 is a lucky #) & Emerald cut is my favorite! – Cute story…. one day when I was on set with Tarek when he was filming #flipping101 I was hanging out in the sprinter, Tarek came in & shut the blinds and said do not under an circumstance come outside or open the blinds….. I asked him for days “what were you doing, when can you tell me?” He wouldn’t budge. It was a hard no! Well turns out he was meeting with Benny to look at the diamond 💎 They had it shipped in from Europe. I’ll let my fiancé tell you the rest!! 💍 – I’m absolutely obsessed with it & can’t stop staring at it!! It’s perfect for me in every way! Thank you Mr. El Moussa for making me the happiest! – Do you guys love it??? Tell me tell me!!

Read More: Are Mary and Romain Still Together?