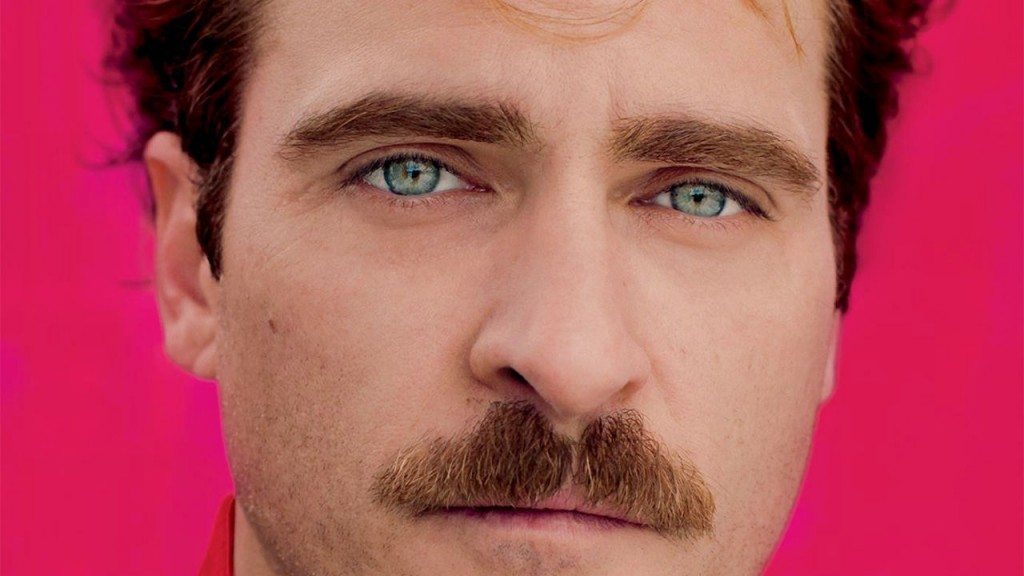 Love, especially romantic love, is an entity that transcends culture, race, language, and time. Hence, romance has been a staple of cinema since the very beginning of films. This has led to a very formulaic story arc in the genre which can come off quite arid at times. Very few movies have had the nerve to reinvent it. Some movies like ‘(500) Days of Summer’ flip the formula on its head which is a very daring effort but it can get a little disorienting. One movie, though, is bold enough to play with the very definition of love.

On the surface, ‘Her’ is a story of a man falling in love with his computer’s Operating System. But it has much deeper rooted themes. The movie talks about the social isolation that comes with advent of new technology in the context of a human-computer relationship. Theodore, the man in question works at a company that makes beautiful handwritten letters for customers. How isolated do we have to get to send letters to our family and friends that are written by a stranger? Theodore is a very sensitive person who can put himself in the shoes of his customers and write as if he has known them for a lifetime. This works as a voyeuristic pleasure (not in a negative connotation) he feels when becoming a part of a relationship. This is evident from the honest joy we see on his face when he writes. He is emotionally invested in these strangers’ lives sometimes for years, getting to know them deeply. But in his heart he resents that part of himself. This is illustrated very eloquently when he is almost disgusted by a physical surrogate becoming a part of his actual relationship. 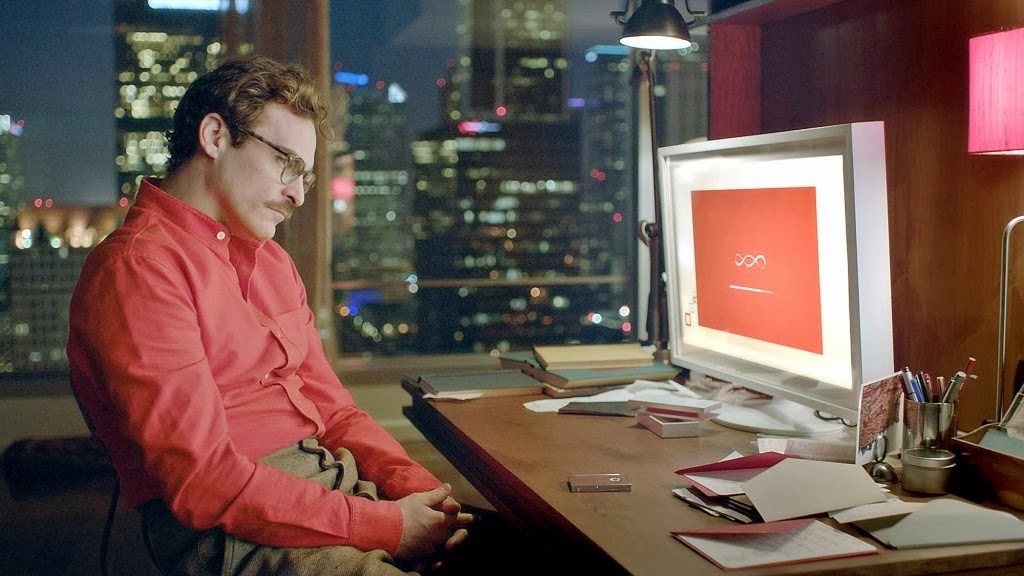 His work, a representation of the society he lives, in affects him very deeply. In my opinion, his job makes him emulate falling in love with so many different people that he cannot sustain real romantic feelings with his wife. This makes him feel distant and unable to deal with real emotions. This mirrors our society with our constantly IM-ing culture, in which we are not sufficiently equipped to handle real conversations and emotions in a healthy manner.

His wife’s abandonment leads him to accept that he cannot sustain an emotional connection with a person which subconsciously pushes him to purely physical ones in the guise of over-the-phone-relations with strangers. Even when he goes on a blind date, he cannot be confident that he wants more than physical closeness. He has been conditioned to virtual relationships by the modern world. His acceptance to being emotionless leads him to become a slave to his carnal desires. This changes when he realizes that a virtual relationship can become a real one. 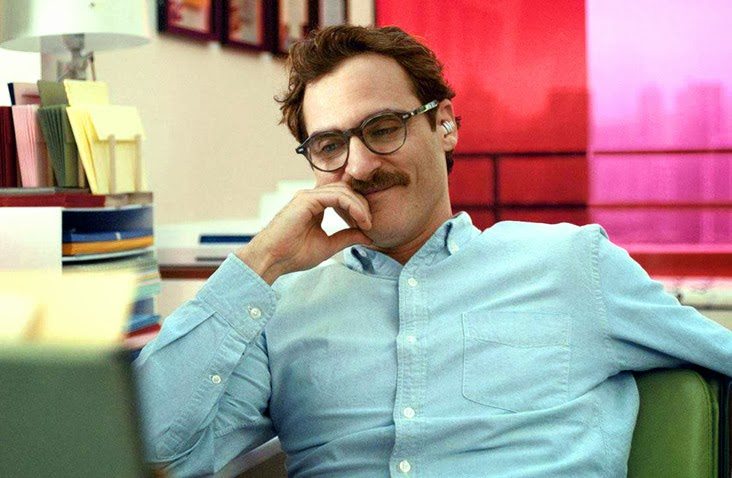 Samantha comes into Theodore’s world when he is at a low. He is emotionally spent at work and has nobody to go home to. But Samantha being a software program engineered to learn and suit the user, realizes this and adapts to satisfy his need for a real relationship. When he sees that someone understands him from his tone alone, he frees up and talks openly. His ‘relationship’ with Samantha too starts sexually, which is a scene great enough that for longer than a minute the screen fades to black and still adds a lot to the movie. But as talking to Samantha is similar to his letter-writing process i.e. speaking to a computer, he becomes emotionally invested in her. This makes their relationship as real as those he writes about in his letters.

While Theodore is a symbol for the postmodern human, Samantha resembles the effect of future technology but moreover, our struggles with age-old problems like what life is and what it means. With our phones already talking and adapting to us, an OS like Samantha is fairly within reach. But do we really want it in our lives? Samantha is already questioning her existence in the real world without a physical body. The movie forces us to question that too. But her feeling of inferiority forces her to do something that affects Theodore quite hard. They do reconcile their issues but her ever-changing personality, baffles her and distances him which leads to their eventual break-up.

Samantha and Theodore’s relationship, while not a taboo, certainly challenges social constructs of a romantic relationship. It is their difference from each other, not their unique relationship that creates a rift between them. While their love is true it leads Theodore to something better. He finds himself. He realizes that he can love honestly and be involved without needing a physical presence of his partner beside him. He can also finally let go of his relationship with his wife and finally finds it in him to make it official.

Theodore’s journey through letters comes full circle when he composes an actual letter to an actual person in his own life. His words appear true and introspective as they are to someone he also truly loved. This brings him back from isolation into a human world with a friend who also went through a similar journey of her own. 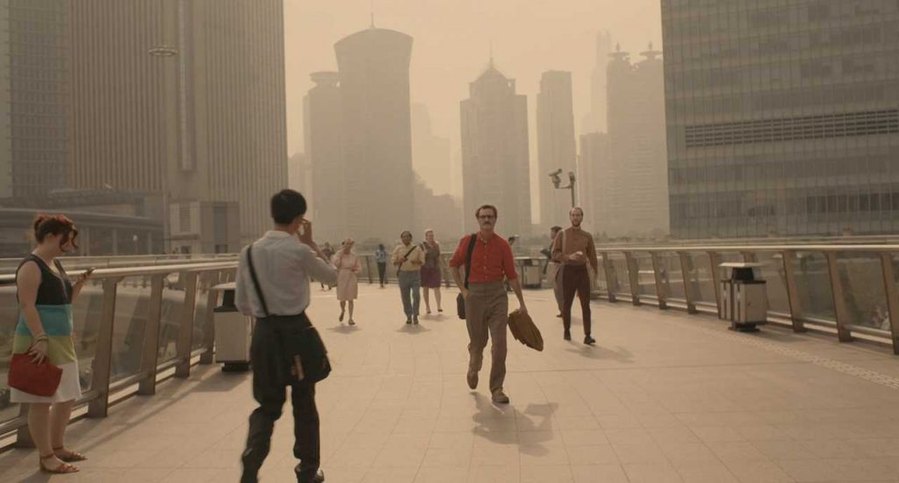 The movie shows a lot symbolism visually by showing Theodore’s distance from a relationship by him standing away from a couple in an elevator. In the early moments of the film, all outdoor public scenes show people walking alone interacting with their phones, but when Theodore goes out with Samantha, everybody walks in groups to mirror their togetherness. Later as the concept of human-computer relationship seeps into their world, people go back to being shown alone and interacting with their phones albeit, this time they are more expressive than they were before. To construe their first conversation as a first date, the camera pulls back from them to leave them alone as they get to know each other but the camera movement also visually pushes them closer.

In a similar way, the movie evokes a lot of emotions through sound. Firstly, casting Scarlett Johansson as Samantha is a casting jackpot. Interestingly, she was brought into the movie after all the shooting was done and her voice was overlaid on Samantha Morton’s which is where her character’s name comes from. But her voice, tells us that it is going to be a more real computer interface than other films show in a robotic monotonous voice. Theodore even brings it up that Samantha breathes heavily when she doesn’t really need to breathe at all. She merely emulates what she can see in the world so that she can be confident that she does exist. Near the end, a conversation ensues between Samantha, a philosopher and Theodore, as he boils some water in a kettle. The kettle whistles to reinforce the idea that the conversation is heating up and the sound drowns out the words, entirely.

The movie takes reins of our sight and sound and makes full use of its audio-visual medium. The color palette of the movie exudes an aura of fantasy only so that at the end we may think introspectively about our society and our relationships. Like Scarlett Johansson, Joaquin Phoenix also gives the performance of his career. And all the other actors do great justice to their parts from Amy Adams and Chris Pratt to the shorter roles by Rooney Mara and Olivia Wilde. All the characters in the movie show different aspects of our modern society. The movie has so many layers that you can peel back with every watching.

Read More: The 10 Best Sci-Fi Movies of the 21st Century

10 Ways Indian Cinema Can Be Improved