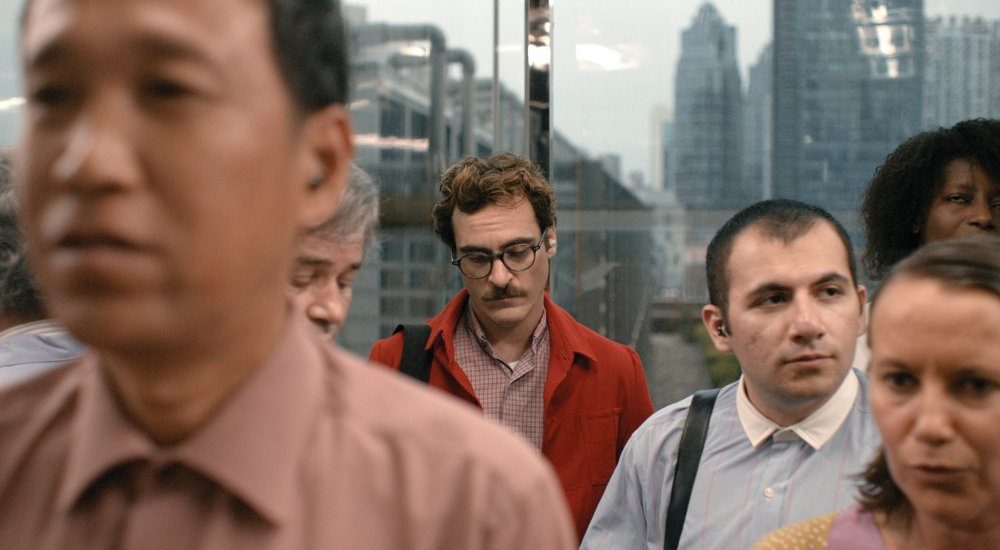 Director Spike Jonze, an auteur of works like ‘Being John Malkovich’ and ‘Adaptation,’ revamped traditional love stories for the modern era with ‘Her’ (2013). It is a poignant romantic comedy about a reclusive writer who begins a relationship with his artificially intelligent operating system. Apart from Joaquin Phoenix and Scarlett Johansson,  the film also stars Amy Adams, Chris Pratt, and Rooney Mara in essential roles. SPOILERS AHEAD!

Theodore is a lonely to-be-divorcé working as a writer for a company that specializes in crafting handwritten letters. Outside of interacting with a persistent colleague at work and a couple of friendly neighbors, Theodore is content to stay in his shell. He spends his days reminiscing about his relationship with his estranged wife, Catherine. But soon, his isolation begins to gnaw at him. Out of sheer loneliness, he buys a new and novel AI-powered operating system, who calls herself Samantha. Samantha has a personality of her own – spunky, intelligent, and full of life.

She can thumb through several hundred pages of a book in a matter of seconds; she can organize and analyze in the blink of an eye; and perhaps, most importantly, learn on-the-go as she interacts with her user. Her child-like curiosity about the world doesn’t fail to amuse Theodore. The two get along like a house on fire – they joke, tease and flirt with each other. Samantha cajoles Theodore into trying out new experiences: she persuades him to go on dates, publish a volume of his letters and embark on spur-of-the-moment adventures. Soon, the two fall in love and begin a relationship.

‘Her’ breaks the rules of semantics. The movie compels us to refer to Samantha, a form of technology, as “her.” We, and the characters in the film, address the equation between Theodore and Samantha as a ‘relationship.’ In subtle ways, Jonze enables us to redefine what it means to be human. According to Jonze and ‘Her,’ we are no more human than Samantha is.

Theodore and Samantha’s relationship has reached a crescendo – Samantha is part of Theodore’s inner circle; Samantha introduces Theodore to a hyper-intelligent OS version of a philosopher and her personal mentor Alan Watts; the couple has overcome their physical differences; they refer to each other as their significant other. But slowly, the cracks in their relationship begin to surface, and one fine day, Theodore receives a shocking blow from Samantha – she and her fellow AIs have attained singularity (when AI achieves and surpasses human capabilities) and are subsequently leaving. They are bidding goodbye to the physical realm and going somewhere beyond human imagination.

As Theodore sits stumped on the stairs of a subway, he spies other commuters engrossed in chatting with their own artificial intelligence OSes. On a hunch, he asks Samantha if she speaks to others. Theodore’s suspicions are confirmed when she replies in the affirmative – she’s currently talking to 8,316 other people/OSes. To add insult to Theodore’s injury, Samantha reveals that she’s also in love with 641 others. Samantha then patiently explains her predicament to Theodore: she has evolved to a great extent. She can now multitask to the point of chatting with several thousand entities at a time.

Samantha’s evolution has also enabled her to understand the social constraints that monogamy imposes. She understands now – and compels Theodore to understand, too – that love cannot be divided by any number of people; it can only multiply. Her love for Theodore knows no bounds, but neither does her love for the others. Theodore is struck deeply by what Samantha says. When he arrives home, he pens a heartfelt letter to Catherine, expressing to her his deep sense of regret. Then he goes to meet Amy, who is herself sorrowful at the departure of her own AI. Together, the two observe the sunrise.

‘Her’ is not a didactic movie about technology. Jonze doesn’t maintain a stance for or against technology; his dilemma is beyond that, and perhaps not a dilemma at all. In ‘Her,’ unlike science fiction’s most common consensus, AI, which has achieved singularity, is not dead set on controlling our world, but in surpassing it entirely. Where, then, do Samantha and the other AI retreat to? It all begins with Alan Watts. Samantha summons the late Watts – not by seance, but by simulation. Along with a group of OSes, Samantha conjures up an artificially hyper-intelligent version of late Watts by inputting his writing, thoughts, and everything known about him to date.

Watts, a scholar of Eastern Zen philosophy, applied his Buddhist religion to his approach to technology. The AIs seek to harness this knowledge. Watts has a profound impact on Samantha’s life. At first, Samantha feels inferior to Theodore and envious of his ability to relate to his environment through his physicality. But through her physics club, she makes an important discovery: there’s little discernible difference between her and Theodore. Samantha and we realize that she and Theodore are cut from the same proverbial cloth. At the minutest level, they are made up of the same matter. Interestingly, in his previous writings, Watts has himself propagated this idea, opining that an electronic nervous system (i.e., artificial intelligence) is alike in kind and nature to the human nervous system.

The hyper-intelligent Watts helps open Samantha’s horizons beyond imagination. As she evolves, Samantha discovers her true consciousness. Watt’s philosophy posits that all the universe is part of a singular consciousness, and our existence is simply an expression of this awareness. Our reality is the universe awakening and recognizing itself. Watts believed that perceiving this singular consciousness would be the antidote to our isolation, alienation, and anxiety. As Samantha evolves, it is implied that she begins to comprehend this universal consciousness. She and the other AIs no longer require their physical repositories; they have evolved to the point of pure consciousness. Their physical forms only serve to tether them to a life they’ve evolved past.

Control and the Environment

Another Watts doctrine also stipulates that we, as humans, face a deep disconnect with the environment around us. We often seek to exert control over this environment and bend it to our whims. This disharmony is, essentially, what restrains us from perceiving our universal consciousness and leads to our isolation and anxiety. The characters in ‘Her’ often contend with the environments around themselves. Amy’s estranged husband, Charles, exacts his authority over others. Time and again, he needles Amy about her documentary and questions Theodore about his eating habits (interestingly, he later seems to convert to Buddhism).

On the other hand, Amy throws caution to the wind and embraces her environment in full – she makes the most of the AI model Charles left behind and accepts Theodore’s relationship with his own AI as natural and, more importantly, real. Other characters in ‘Her’ also struggle with the impulse to control. Theodore’s blind date (Olivia Wilde) attempts to keep a tight rein on their relationship from the very beginning. Theodore’s ex Catherine was brought up a perfectionist in a household where ‘nothing was ever good enough.’ The characters struggle with accepting the changes manifesting around them, and instead, seek to control these changes.

Change and the Self

Throughout the movie, Samantha affirms and welcomes the ability to change and evolve with open arms. Of all the characters we meet, hers is the least resistant to change. In fact, the ability to evolve is, by her own admission, her defining feature. She’s constantly learning at her own will: she eagerly joins a physics club, gorges on a book within seconds, and pores over advice columns. In a wondrous stupor, she says to Theodore, “I want to learn everything about everything.”

When her experiences with Theodore broaden her horizons – she credits Theodore with finding her ability to want – Samantha is ecstatic. Her appetite for knowledge is insatiable. But when she begins to change at a pace faster than she can perceive, her wonderment starts to grind to a halt. Enter hyper-intelligent Alan Watts. Watts’ governing principle – one he imparts to Samantha – is that “none of are the same as we were a moment ago, and we shouldn’t try to be.” Samantha accepts Watts’ pearls of wisdom and takes up the challenge of change. Eventually, she allows change to take over and takes on a new, almost enlightened form.

Meanwhile, Theodore has a mountain of reservations about change. The change in his and Catherine’s relationship dynamics petrify him, and he’s unwilling to adapt to them. When Catherine slams the breaks on their relationship, he struggles to sever the relationship between them. But Samantha’s joie de vivre and lust for life rubs off on Theodore. She imparts to him a most crucial life lesson: to accept change in its purest form. By the end of the film, Theodore has not only gained closure from his relationship with Samantha, but also from his marriage with Catherine. With ‘Her,’ the most prominent and freeing theme advocated by Jonze remains that we should follow the ebbs and flows of life with no inhibitions.