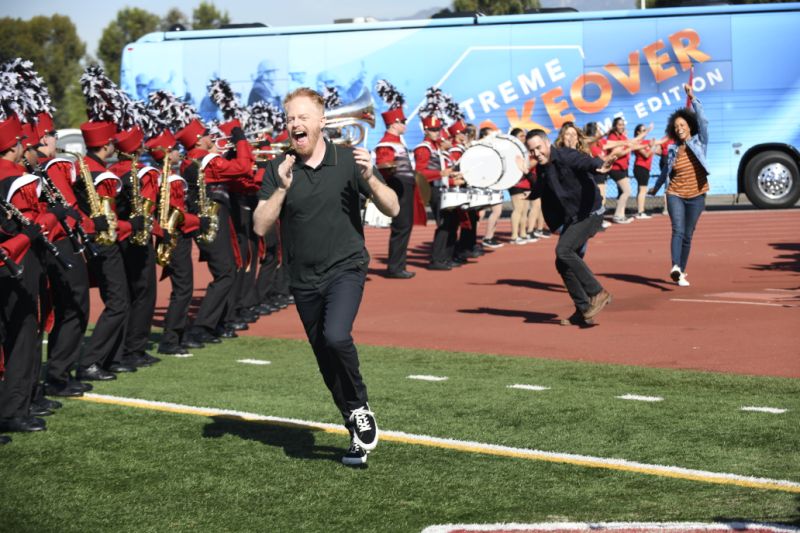 Home makeover shows provide viewers with the joy of watching the process of transformation in a grand yet relatable manner. All of us must have engaged ourselves in a lengthy bout of wishful thinking, imagining the perfect makeover for our home, at least once. HGTV’s revival of ‘Extreme Makeover: Home Edition’ provides us with another opportunity to stroke such imaginative thoughts.

The series originally aired on ABC till 2012 when it was canceled. The show’s basic premise is this: a family is selected to have their home renovated significantly and sent away for a few days. The ‘Extreme Makeover’ team is tasked with redesigning the family’s house, in accordance with their needs, before the family’s scheduled return.

Apart from the joy of watching a house being transformed, ‘Extreme Makeover: Home Edition’ provides viewers with something more heart-warming. The team scouts for families who have been known to give back to their communities generously, but face financial or other forms of constraints that limit their need for a home makeover. In this manner, the series ends up helping those in need in a charming way.

The HGTV show adds several tweaks to the original premise, with the most glaring change being the host. The carpenter-cum-model, Ty Pennington was the beloved host for the original ABC show. However, the HGTV revival sees the ‘Modern Family’ star Jesse Tyler Ferguson taking over the reins. Ferguson has no experience when it comes to carpentry, unlike Pennington. However, what he does possess is a loving and likable demeanor apart from a benevolent desire to help others. In fact, Fergusson’s lack of experience actually adds to the show’s appeal as the design team constantly jokes about it, in a well-intentioned way.

Many of you might be wondering where is ‘Extreme Makeover: Home Edition’ filmed. The show travels to a new location every episode to take care of a single project. Because of such a premise, the show is filmed in a different location every episode, depending on where the family-of-the-week’s house is.

Jessica Mosley is a mother who adopted three children who were bound to get stuck in the foster home system despite having two biological kids of her own. Unfortunately, her father, who was going to arrange for a loan to house the large family passed away in a car accident. Because of that, the Mosley family was forced to move into the three-bedroom house of Jessica’s mother. The ‘Extreme Makeover’ team helps the Mosley family by building a house that can accommodate its members.

We’ve landed in Kern County to surprise The Mosley Family. Jessica and her mom Pamela have given so much…it’s time to give them a new home and fresh new start! 🏡 #hgtvextreme @hgtv

In another episode of ‘Extreme Makeover: Home Edition,’ the team heads to the city of Clovis in Fresno County, California. Here, they help the Reeder family by giving their house an extreme makeover. De Young Properties helped the production team with the makeover.

Nick Reeder, the head of the family is a firefighter with twin daughters, His wife, Amanda, unfortunately, passed away shortly after giving birth to the twins.

Have a look at the following video that depicts the lively atmosphere when the Reeders are shown their new house:

Apart from Clovis and Bakersfield, the ‘Extreme Makeover: Home Edition’ team also traveled to other places to renovate the homes of deserving families. For instance, Fergusson and co. visited Odgen, Utah to help the Barobi family.

Exciting news! Ogden-Weber Technical College #YouthBuild has been asked to participate in Extreme Makeover Home Edition! Students will be tasked with assisting in the construction of the Barobi Family's new deck. How amazing is that?! pic.twitter.com/yv2S76MmDd

Apart from that, other Instagram posts by host Jesse Tyler Fergusson reveal how the production team visited places like Hawthorne, Covina, Pomona and West Athens. Since all the places are in California, there is a possibility that there might be some overlap: that is, posts in different locations might have actually depicted pictures from the filming of the same episode.

I made @breeganjane take this photo on the set of #hgtvextreme today. How am I just now noticing the branded pavement? Have we done this on all the house?! No one tells me anything!

Today we are moving the bus for the last time & wrapping up Season 1 of @hgtv’s Extreme Makeover Home Edition! I can’t wait to share the stories of these amazing families with you! AND…you are absolutely going to fall in ❤️ with the new design team @carrie_locklyn, @breeganjane & @darrenkeefe! Look for us early 2020 on @hgtv!!! 🚌 🏠

When @darrenkeefe has to physically remove me from his projects on #hgtvextreme.