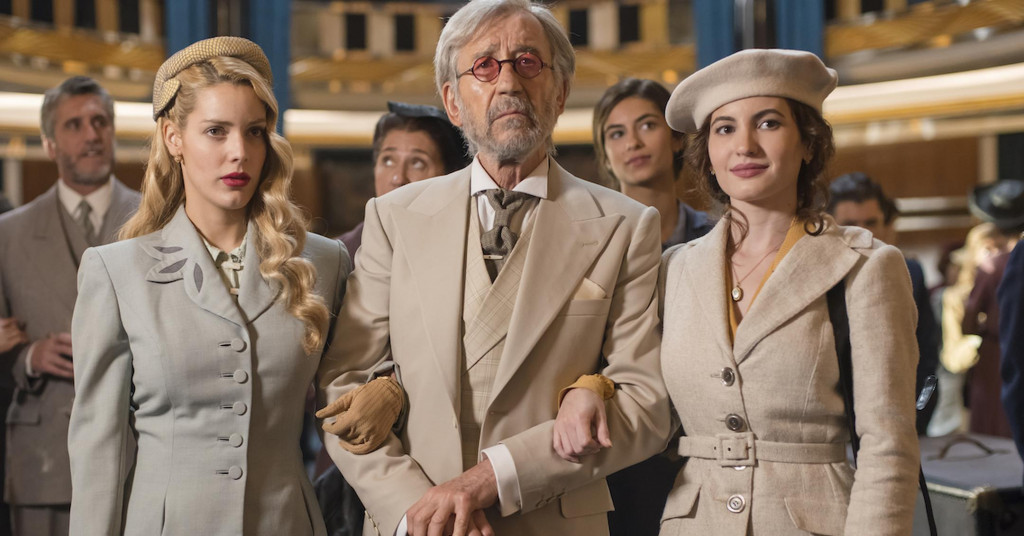 “Some secrets are deeper than the ocean” — with quite a poignant yet sinister intro, Netflix’s fourth original Spanish series has caught the attention of fans of Agatha Christie’s ‘Murder on the Orient Express’. When you see the opening scene of ‘High Seas’, you might also get nostalgic ‘Titanic‘ vibes. But well, this is not a story about doomed love in a doomed ship. The show is about “Two sisters discover disturbing family secrets after a string of mysterious deaths occur on a luxury ship traveling from Spain to Brazil in the 1940s.”.

Created as another addition to the streaming giant’s extensive repertoire of foreign-language programs, ‘High Seas’ is a spectacular series that combines grandeur with thriller elements. Developed by Ramón Campos and Gema R. Neira, the show is directed by Carlos Sedes who also executive produces it alongside Teresa Fernández Valdés and Campos. The show first premiered on Netflix on May 24, 2019.

High Seas Cast: Who is in it?

The cast of ‘High Seas’ features some renowned names from the Spanish entertainment industry. José Sacristán stars as the captain of the ship. You might already know him for his performance in ‘Velvet’. Ignacio Montes plays the role of the main murder suspect. Ivana Baquero portrays the character of Eva Villanueva. She is best known for her roles in ‘Pan’s Labyrinth‘ and ‘The Shannara Chronicles‘. Model-turned-actor Jon Kortajarena appears as Nicolás Vasquez, the Chief Officer of the Bárbara de Braganza. Other notable names include Daniel Ludh, Eloy Azorín, Manuela Vellé, and Alejandra Onieva.

High Seas Plot: What is it about?

‘High Seas’ transports you to the 1940s, when a ship, the Bárbara de Braganza, embarks on a cruise from Rio de Janeiro. While some passengers from the lower societal strata want to go to Latin America for a better future, the high-class travelers are on the voyage, believing something good will happen during the journey. Aboard the grand vessel are sisters Carolina and Eva, who are polar opposites yet quite close to each other. Next, we meet Nicolás Sala, who becomes interested in one of the sisters. The other sibling’s fiance is also traveling with them. But each of these passengers on this royal voyage has a goal and hides several mysterious secrets. When a grisly murder of an unknown woman rocks the ship, everyone becomes a suspect.

The elaborate sets of ‘High Seas’ are so glamorous that they radiate that luxury feels from the 40s. Coupled with the elegance of this liner is a story filled with melodrama, romance, and mysteries. As per Variety, the main ambition of this project is “to give a female public, enamored of romantic series and melodramas, a quality product, something it could be proud to see.” Beginning with that familiar Agatha Christie premise, ‘The murderer must still be on the ship’,” ‘High Seas’ delivers twist after twist, with each episode ending on a cliffhanger. Therefore, the audience is left with no other choice but to binge-watch the whole series.

High Seas Season 2 Release Date: When will it premiere?

‘High Seas’ season 1 premiered on Netflix on May 24, 2019. This first season comprises of 8 parts of 50 minutes each If you didn’t know already, ‘High Seas’ is Netflix’s fourth Spanish original series, produced by Bambú Producciones. Past Spanish shows like ‘Cable Girls’, ‘Money Heist’, and ‘Elite’ received high praise and continued for multiple seasons. While ‘Cable Girls‘ is one of the top 10 streaming shows in South America, ‘Elite’ was ranked as the most in-demand global series in 2018. ‘Money Heist‘ ranks as one of the most-watched foreign-language series ever.

Even before the first season had aired, Netflix had, in fact, completed shooting for 16 episodes instead of 8, in a single batch.  So, it was only a matter of time before the second season arrived. After just six months since the first season, ‘High Seas’ season 2 is all set to release on November 22, 2019 on Netflix.

While we wait for ‘High Seas’ season 2, check out the season 1 trailer to refresh your memories. If you haven’t seen the show yet, head over to Netflix to catch all the episodes of the previous season: