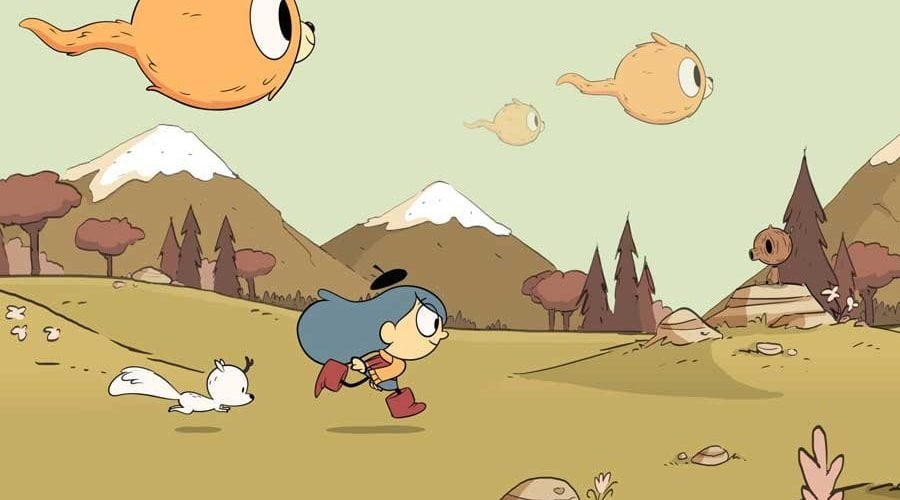 ‘Hilda’ is one of the shows that will help you to bring about a new outlook on your life. With elements of fantasy, adventure and comedy, ‘Hilda’ is an animated television series that is based on the graphic novel series of the same name. Luke Pearson has created both the comic series as well as the show.

The show airs on Netflix and first premiered on September 21, 2018. This series is the latest addition to an ever-increasing library of impressive animated shows on Netflix that includes the likes of ‘BoJack Horseman‘, ‘Disenchantment‘, ‘Castlevania‘, and ‘Carmen Sandiego‘. Naturally, the show has received high praise from fans and critics alike, who have remarked on the writing, vocal performances, characters, and animation.

Hilda Cast: Who is in it?

The titular role of Hilda is voiced by Bella Ramsey, who we last saw in the heroic role of Lyanna Mormont on ‘Game of Thrones‘. ‘The Worst Witch‘ star has been confirmed to return for the next season as well. Other than this, we can hear the voices from Rasmus Hardiker as Alfur Aldric, Daisy Haggard as mum or Johanna, Nina Sosanya as well as Reece Pockney, as Trevor, and Kaisa Hammarlund to name a few. ‘Hilda’ has some talented people on board who will return for the upcoming season and if needed, more people will be roped in to do justice to the animated figures.

Hilda Plot: What is it about?

‘Hilda’ is indeed high on the drama considering it is a’ program for kids. The TV series follows the paths of the original comic books. The show follows the journey of a girl named Hilda. She is a girl who has blue hair, and this is what sets her apart from the others. Her life is full of adventures, and she is fearless in all her encounters along the way. Her constant companion in every quest is her deer-fox, Twig. Together, they travel from the magical wilderness to a bustling city that is known as Trolberg. This is where she can conquer the most dangerous and ferocious monsters. The entire story is set in 20th century Scandinavia, and Hilda has other friends, like Alfur, a small elf. In Trolberg, Hilda begins to realize there might be more to city life when she finds new friends in David and Frida.

‘Hilda’ is a perfect juxtaposition of fantasy, a bold and adventurous spirit, and also a world of awe and wonder. It serves not only to entice children, but also to make you find an all-new spirit in another worldview. It comes with a promise and a possibility of the fulfillment of a teenage dream. And that is why it is so unique. Breaking the barriers of a small animation film, ‘Hilda’ is all about an expedition with a promise of the unknown.

Collider sums up the show well, saying, “Regardless of age, Hilda invites viewers to join in the mystery and thrill of adventure and to find the magic in the introduction of these many creatures, and some of their curious habits, in an upbeat and wonderful world. Though Hilda must grow up and accept city life, she need not put aside her childlike wonder. Neither should we.” The best part of the show is that it is completely closed and does not have any winks or nods to the real world. Hilda’s world is a unit in itself with its own rules and regulations.

Polygon summarizes this quite aptly, saying, “Hilda is taking an entirely different approach: reframing the struggles of youth as magical challenges, filled with fantastical creatures and plenty of love and support. It’s wonderful to be able to share that with my oldest child, to watch its metaphors bloom inside her head. I’m excited to see where the show takes her.”

Hilda Season 2 Release Date: When will it premiere?

‘Hilda’ Season 1 premiered on September 21, 2018, as a Netflix Original and is said to have been one of the highest rated debut seasons for the streaming website. Almost a week after it was dropped, Netflix went ahead and picked up the show for a second season and confirmed the same in October 2018. While no release date has been set, considering one of the books the show is based on comes out in 2019, the best bet for ‘Hilda’ season 2 to premiere is sometime in 2020. However, do stay tuned for an official update on the release date.

While we wait for ‘Hilda’ Season 2, you can check out the trailer for Season 1 below. It is one of the best shows on Netflix currently and you must catch the previous season before the new one arrives.