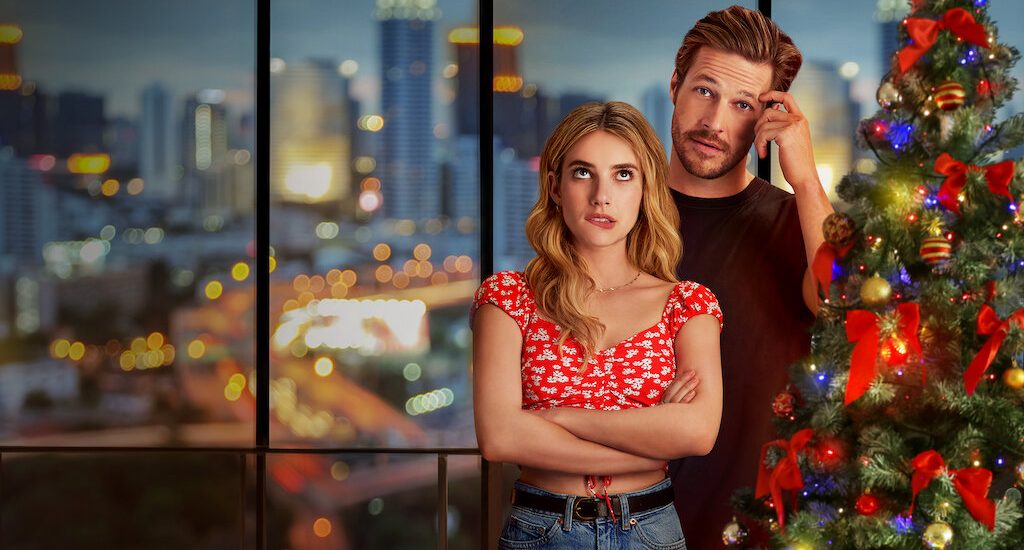 ‘Holidate’ is a modern age rom-com that deals with two individuals, Sloane and Jackson, as they platonically date each other on festive occasions over the course of one year. But does this proximity eventually translate to actual romantic feelings? Starring Emma Roberts and Luke Bracey as the protagonists, this movie puts its own unique spin on the genre. So, if you’re curious about the ending, then this article is for you!

Sloane is a girl with an overbearing mother, Elaine, who just wants her to settle down and have a family like her sister, Abby. When her younger brother, York, proposes to his girlfriend, Liz, at Christmas, it only makes the protagonist’s romantic plight worse. Plus, she has commitment issues since her ex-boyfriend, Luc, cheated on her. On the other hand, there is Jackson, a professional golfer who hails from Australia. His dating life is also in shambles, and he meets the most… unique women, for the lack of a better word. Sloane and Jackson meet at the mall one day and discuss how pathetic the holiday season has been for them.

This is when Sloane also talks about the concept of “holidate.” Essentially, two people act as each other’s dates over festive occasions to escape the insurmountable pressures that are associated with the celebrations. This platonic relationship also means that there are no expectations. The two protagonists agree to act in this capacity for each other. The rest of the movie follows their escapades as they spend more and more time together, eventually developing romantic feelings. But given Sloane’s troubled romantic past, will she be able to see what is right in front of her?

At Thanksgiving, Susan brings a new date, Wally. However, he ends up making a connection with Elaine instead. Sloane asks her aunt why things didn’t work out with Farooq, to which she responds by saying that everything ends eventually so why delay the inevitable. In the meantime, the mother burns the dinner, so Jackson and Sloane head over to the store. 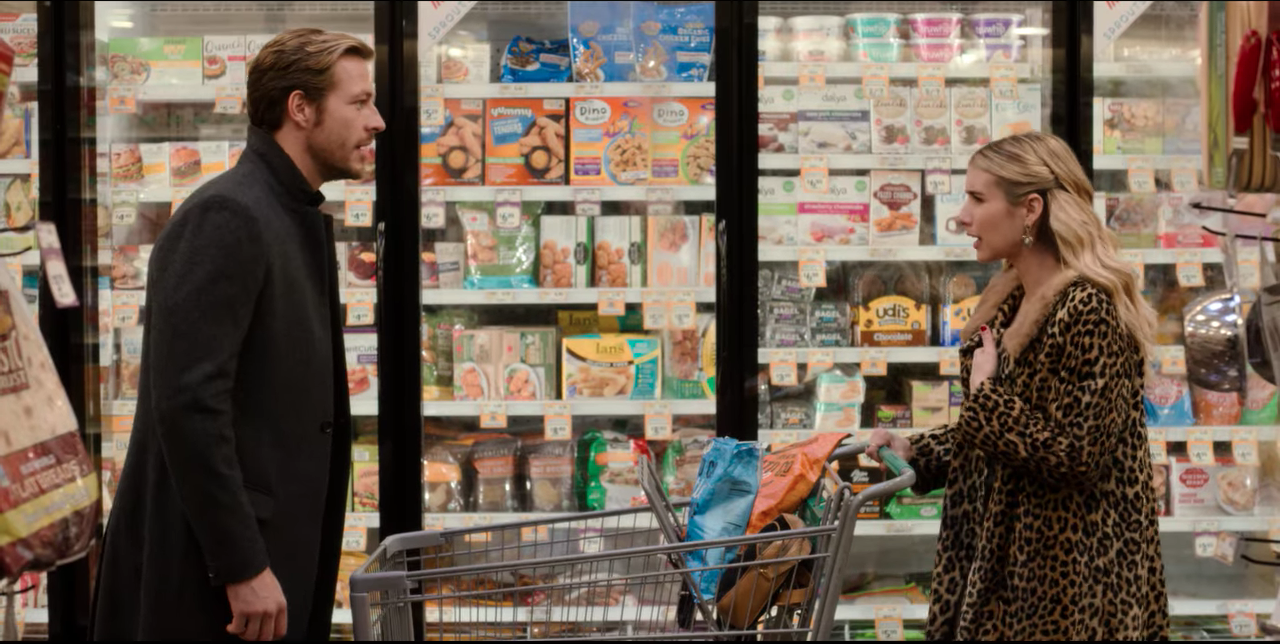 Once there, Jackson brings up the night they slept together, and Sloane doesn’t want to talk about it. She mentions that he did not find her attractive initially and that such things really set the tone of a relationship. However, he vocalizes exactly how beautiful Sloane is and claims that he could not have said all this to her before as she would not have gone out with him. Unfortunately for Sloane, this heartfelt confession holds little value.

Before leaving, Jackson says that she is lying to herself, and consequently, to both of them, which makes her the bad person. He points out that she is trying hard not to face her true feelings, and that she would not get on the Ryan Gosling train either. Post this spat, Sloane comes home, alone, and Abby asks her where Jackson is. On not getting a satisfactory response, the sister feels as though Sloane must have said something to him, and the whole family sides with the former.

However, in a fit of anger, the protagonist blurts out that Abby kissed Jackson’s friend, who was dressed as Black Panther on the night of Halloween. The husband hears this, and they fight about their marriage. Just then, Wally has a heart attack, and Sloane and Susan go with him to the hospital. In the waiting room, the aunt states that she has always been too scared to chase after love, which is why she ends her flings before they can hurt her.

However, seeing that Farooq is the doctor on call, she confesses her love for him, and the two reunite. Later, Sloane goes to Jackson’s apartment building but gets cold feet when she sees him from a distance. However, they do make eye-contact at the mall, but she is still too stubborn to go talk to him. It is only when her niece tells her to not miss out on the opportunity that she chases the man she loves. However, it is Christmas, and the mall is really crowded. Furthermore, the choir is singing carols because of which Jackson can’t hear her.

But the choir lends a helping hand and sings his name out, grabbing Jackson’s attention. Following this, Sloane reveals her true feelings in front of everyone and states that she really messed up. She tells him that the past year was the most fun she’s ever had with anyone and that letting him go was a mistake. Not just on holidays or the weekends, she wants to be with him every single day. Jackson pretends to reject her before smiling and walking up to Sloane. 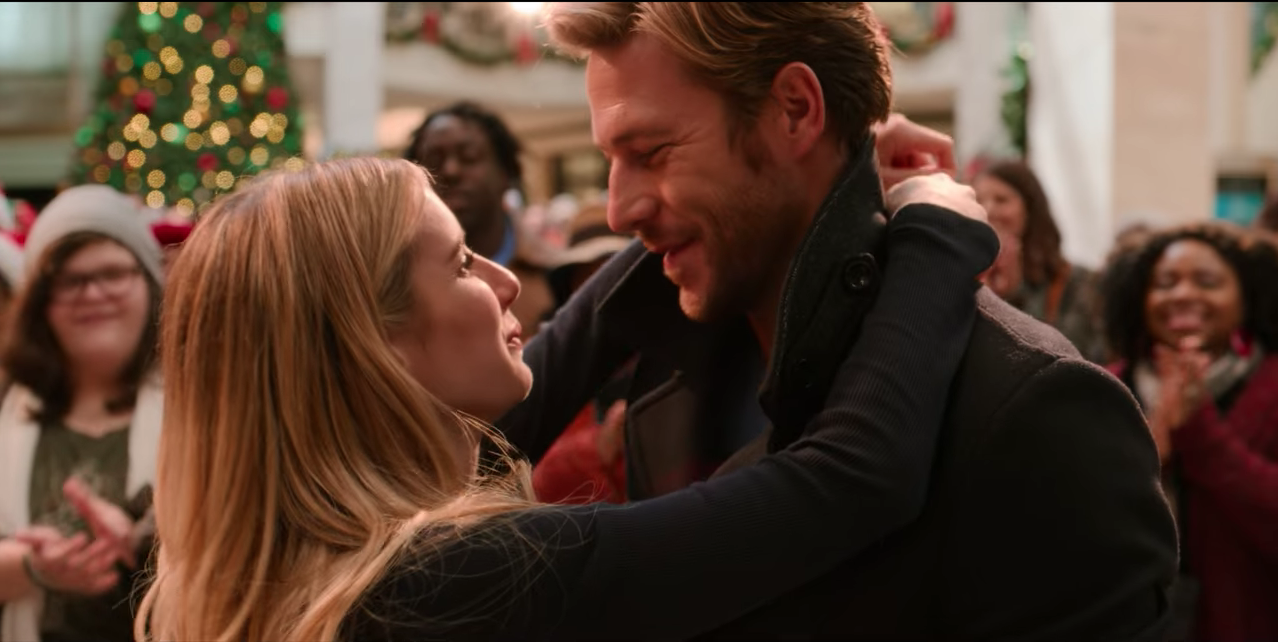 The two hug and kiss each other, and everyone cheers for them. In a photo montage, it is shown that the protagonists have gone to the Land Down Under, whereas Abby and her husband have taken a trip to Las Vegas. York and Liz are seen connecting over tattoos. Elaine and Wally have adopted dogs, whereas Jackson’s friend is now dating the same overbearing girl that the protagonist had previously been with. Alls well that ends well! 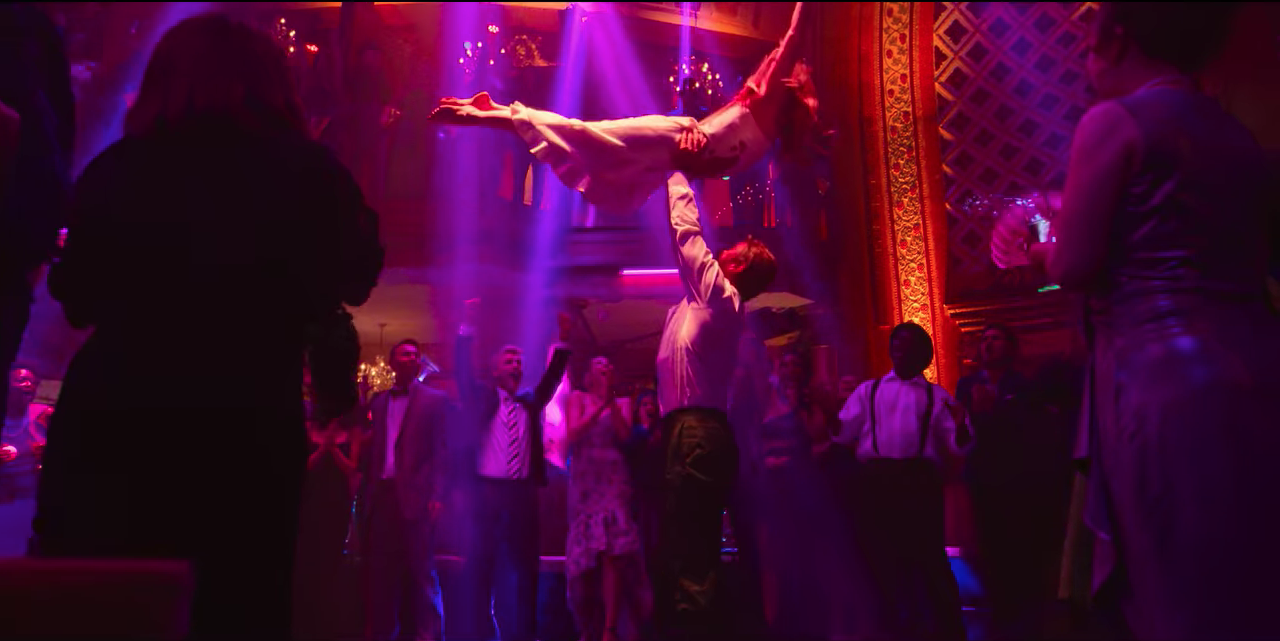 Sloane and Jackson go together to the Skyfall party on New Year’s Eve, and there, she criticizes romantic comedies. According to her, despite the issues that separate the stars, everyone knows that they will end up together owing to the movie posters. She talks about how the female protagonist in such films takes a break from dating even though the leading man is perfect for her. Then, Sloane states that if Ryan Gosling were to walk in and dance with her to the theme of ‘Dirty Dancing,’ she would not reject him; she’s ready to jump on the Ryan Gosling train.

This scene really sets the tone of the film. After all, Sloane’s personality is reminiscent of the very female leads whom she is cynical about. She has Jackson, her Mr. Perfect, in front of her, and she just doesn’t know it yet. She, too, is taking a break from dating because Luc cheated on her. Furthermore, there’s the fact that Jackson actually lifts her up when they dance to – you guessed it – the theme of ‘Dirty Dancing.’ Despite this, it takes till the end of the movie for her to get on her version of the Ryan Gosling train, or rather, the Jackson train.

Furthermore, when the protagonists fight in the grocery store, Jackson brings up Sloane’s commitment issues. He says that she is making matters worse by lying to both of them about her true feelings. His point definitely has some merit because yes, while Luc broke her heart and she can take her time to deal with it, it’s almost as if she’s setting Jackson and herself up for failure without even giving him a chance. Her guard is up, and it’s hurting them for no reason.

Let’s not forget that this is the same man that helped and comforted her after one of the most embarrassing experiences of her life, post the Halloween party. There is this twisted irony about how Sloane is blissfully unable to compare her own situation to the very ladies she has critiqued. We do understand that the verbal spat between the lovers had to take place and is somewhat of a plot convenience as well.

After all, this is what sets up Sloane’s big romantic gesture at the mall. But the thing is, the notion of the “Ryan Gosling train” truly helps us understand the innermost fears and desires of the characters. In fact, had Jackson never pointed out to Sloane that she is too scared to jump aboard it, she may not have overcome her inhibitions until it was already too late. Luckily, she is able to conquer her fear and boards the Jackson train before it left the station for good.