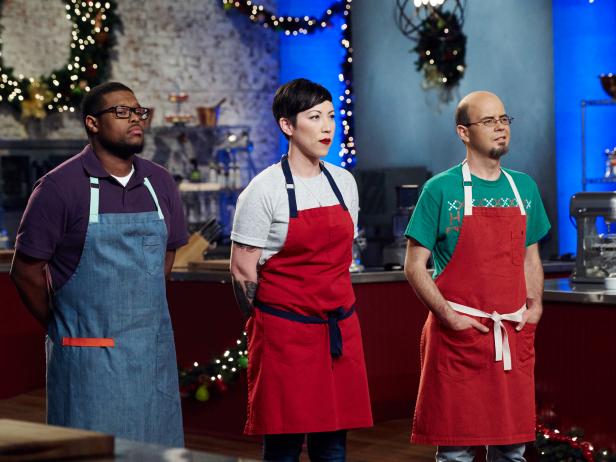 After five successful seasons, here’s everything we know about Holiday Baking Championship season 6.

‘Holiday Baking Championship’ season 6 premiered on November 4, 2019 and ended on December 23, 2019 after a run of seven episodes.

If you are in the mood to make some delicious cakes, pastries and cookies, you can watch all the episodes on Food Network.

Who’s the Host of Holiday Baking Championship? Who Are the Contestants?

‘Holiday Baking Championship’ was previously hosted by Bobby Deen up to season 3. From season 4 onward, Jesse Palmer has been presenting the show. Seated on the judging panel are renowned baker Duff Goldman (‘Ace of Cakes’), pastry chef Nancy Fuller (‘Farmhouse Rules’), and Lorraine Pascale, a former model who is now a chef.

Each season of ‘Holiday Baking Championship’ features a fresh batch of bakers. In season 5, nine contestants competed in a seven-episode baking contest, with one contestant being evicted every week until the competition was between the last-remaining three bakers. However, in contrast to the previous seasons, the fifth season featured the prize money getting divided, where the winner received $25,000 and got a spot on Food Network Magazine and had a chance to have his own video on foodnetwork.com.

Season 6, similarly witnesses a team of new contestants. Geoffrey Blount from Myrtle Beach is a baking and pastry arts instructor at the international culinary institute in his hometown. He is trained in French but is a 100% southerner at heart. Blount wants his kids to learn that anything can be achieved through dedication and hard work.

Jennifer Clifford is a pastry chef from Moultonborough, NH, who is the lucky and happy wife to her high school sweetheart. She wants her husband to use the prize money to buy a brand new camper. Janet Letendre from Malakwa, BC, owns her own home bakery in British Columbia. She, in partnership with her daughter-in-law, is an Instagram celebrity.  Devon Maciver is a home baker from Claremont, CA, who is employed as the dean in a modest liberal arts college. He wishes to use the prize money to further his dreams of expanding his family.

Dwight Penney, an executive pastry chef from a hotel based in Pittsburg, is excited for the arrival of his first child. The fitness addict sticks to his hobby of bodybuilding in his free hours. Maria Short, a bakery owner from Hilo, HI, loves her holidays — when she has Christmas trees both in her home and in her shop. Cedrick Simpson, a pastry chef at a private club in Atlanta, had been on a weight-loss journey and has shed 100 pounds successfully. But he still loves a tiny dosage of sugar.

Sarah, who is a bakery general manager from Boston, is originally a native of Rochester, NY. She is newly married and had ditched her honeymoon to be able to participate in ‘Holiday Baking Champion’. Melissa Yanc from Healdsburg, CA, holds around two decades of baking experience and owns a bakery in her hometown. A new mom and an expecting mother to another, she dreams of using the prize money for her wedding.

Holiday Baking Championship Plot: What is it about?

Each season of ‘Holiday Baking Championship’ consists of six to eight episodes. Each episode comprises two rounds, with the first round called the “Preliminary Heat” and the second round termed as “Main Heat”.

In “Preliminary Heat”, contestants need to curate tiny pastries, that usually are focused on a holiday theme. The small cakes and cookies need to address broad subjects such as Hanukkah or New Years or even more specific themes that involve making a Christmas cookie tree or creating treats, which define a Christmas song.

After this round, the judging panel chooses the winner, who then proceeds to the next round with an added advantage. This benefit can be anything, such as being able to swap ingredients or flavors or asking for help for a few minutes from a visiting guest baking star.

In the “Main Heat” round, participants are given more time than the first round. They have to bake a larger dessert, which again follows the holiday theme of the episode. Usually, in the midst of this round, the bakers are given a sudden twist, that forces them to change their current method — so as to incorporate the change in their plan.

We do not have a full-fledged trailer for ‘Holiday Baking Championship’ season 6. But you can visit Food Network for the latest clips, episodes, and images from the show. There are also some fab baking tips for aspiring dessert-creating enthusiasts.