The Inspirational True Story Behind Hoosiers 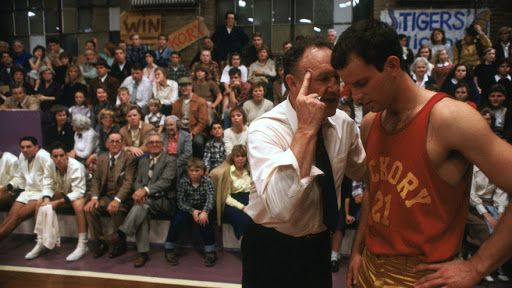 There is hardly a genre that is more inspirational than sports fiction. Sports itself, being about victory and defeat, carries tons of potential for inspiration. Hollywood has managed to capture that feel for decades. The 1986 movie ‘Hoosiers’ comfortably enjoys the position of a classic, David versus Goliath sports movie.

The film revolves around a high-school basketball team from a small, Indiana town, Hickory. In classic, nobody-to-champions fashion, the film depicts how a town that is passionate about basketball manages to put together a formidable basketball team and defeat teams much larger in stature.

Gene Hackman leads the cast of the movie, playing the character of Norman Dale: a new coach with a shady past who assists Hickory in clinching the state championship. The movie was selected to be preserved in the United States National Film Registry in 2001.

Is Hoosiers Based on a True Story?

Yes, Hoosiers’ is loosely based on a true story: that of the Milan High School team of 1954 that won the state championship. However, the movie was met with mixed reviews at first by those involved in the actual story. Several Milan residents were upset that the movie portrayed Hickory’s residents (Hickory was based on Milan) as extremely backward. The character of Norman Dale was largely fictional: an effort to apply the Hollywood formula. Plus, the actual team’s assistant coach was no alcoholic, as portrayed in the film.

Milan and the State Basketball Championship

Milan is a tiny town in the state of Indiana, 39 miles west of Cincinnati. At the time, the town only had a population of 1,114. With a fairly satisfactory farming community, Milan was a classic, quaint, and close-knit American town. At the time, Milan High School had an enrollment of just 161 kids. Its basketball team, The Milan High School Indians, however, was considered to be quite impressive.

The Journey to Victory and State Championship

The Milan High School Indians were not complete underdogs going into the 1954 championship. They had performed beyond expectations in the previous year by winning the regional title in 1953 and reaching the semi-finals. Hence, some Milan residents were actually hopeful of the team performing well the next year.

In the fifties, basketball wasn’t as grand as it is today. There were no summer camps. Yet, the Milan High School players continued to play basketball every chance that they got after the ’53 season. Most of them were working like other kids their age. However, all of them took out time to be in touch with the sport.

Yet, the team would not be having the services of three notable players: Jim Call, Ralph Preble, and Jim Wendleman. However, the coach, Marvin Wood, who had been with the team for a couple of years, did find replacements eventually. Despite the Indians reaching the semis the previous year, Wood warned the players of not being overconfident. He still wanted to account for the fact that despite the players’ talents, Milan High School had significantly lower enrollment than several schools participating in the state championship. The town of Milan was lucky to still have Wood. After the ’53 season, he could have gone onto coach bigger teams as he had made a name for himself by taking a relatively unknown team to the semis.

The team started to schedule matches against bigger teams to prepare. They ended up performing well in most of the games. When the team reached the Final Four in 1954, they became the smallest school to do so two years in a row. That record was held by Wingate earlier. In the final, the team would defeat the significantly larger school, Muncie Central High School, 32-30 to clinch a historic title. When the team returned home, as many as 40,000 people arrived in Milan to greet them. You can have a look at the final moments of the game below: