With the Covid-19 pandemic in its backdrop, Rob Savage’s ‘Host’ derives opportunity from adversity. The film entirely takes place in a zoom call meeting and is replete with jumpscares with little to no plot developments. Still, for a movie that barely stays with you for an hour, ‘Host’ effectively instills chills that will undoubtedly keep you up all night. With that said, if you’ve watched the film, here’s a detailed explanation of its ending and its inspirations.

‘Host’ centers on six friends who arrange a zoom call with a séance practitioner in the hope that they’ll be able to experience something paranormal during the Covid-19 lockdown. Unfortunately for them, things don’t go as planned, and what starts as a fun paranormal experience later turns into something far more sinister.

The Ending: Whose Fault Was It?

When it comes to the overarching storyline of ‘Host,’ it isn’t as twisted and convoluted as most other horror films out there. Even so, in its flaccid runtime of one hour, the film does a whole lot of foreshadowing and also leaves viewers with a little ambiguity. The biggest question that the ending of the movie leaves a viewer with is—who summoned the ghost in the first place? In the opening scene, it is established that Haley, who came up with the idea of setting up a meeting with the séance practitioner, had previously done something like this before. The film also hints that Haley’s home could be haunted even before the zoom meeting.

However, later in the movie, when their meeting begins, Gemma lies about experiencing something paranormal in her room and says that the ghostly presence claims to be Jack, a boy from her school who hung himself. This is when the practitioner warns them that lies not only insults these spirits but also allows them to become a manifestation of the lies. As a result, although Gemma’s story was not real, her lies manifested a demonic spirit that embodied Jack. So considering Gemma and Haley’s take on the paranormal, it seems like both were at fault.

Haley had already summoned the spirit through her past experiences with séance. But it was Gemma’s lie that tapped on the collective unconscious/thoughts of the entire group, due to which the demonic spirit gained full access to their realm and acquired a physical form to haunt them.

Many deaths of the film allude to Gemma’s description of Jack. At first, when Caroline heads over to her attic after hearing loud noises coming out of it, her laptop’s camera shows a pair of feet hanging down from the ceiling. In this scene, the movie first foreshadows that the demonic entity is haunting them by recreating what they manifested. Later on in the film, Haley clicks a polaroid picture of her living room and again finds a ghostly figure hanging from her ceiling. Towards the end, both Redina’s husband and Teddy’s girlfriend are hung to death, suggesting that the demon has become “Jack.”

Would Teddy Survive if he Never Joined the Meeting? 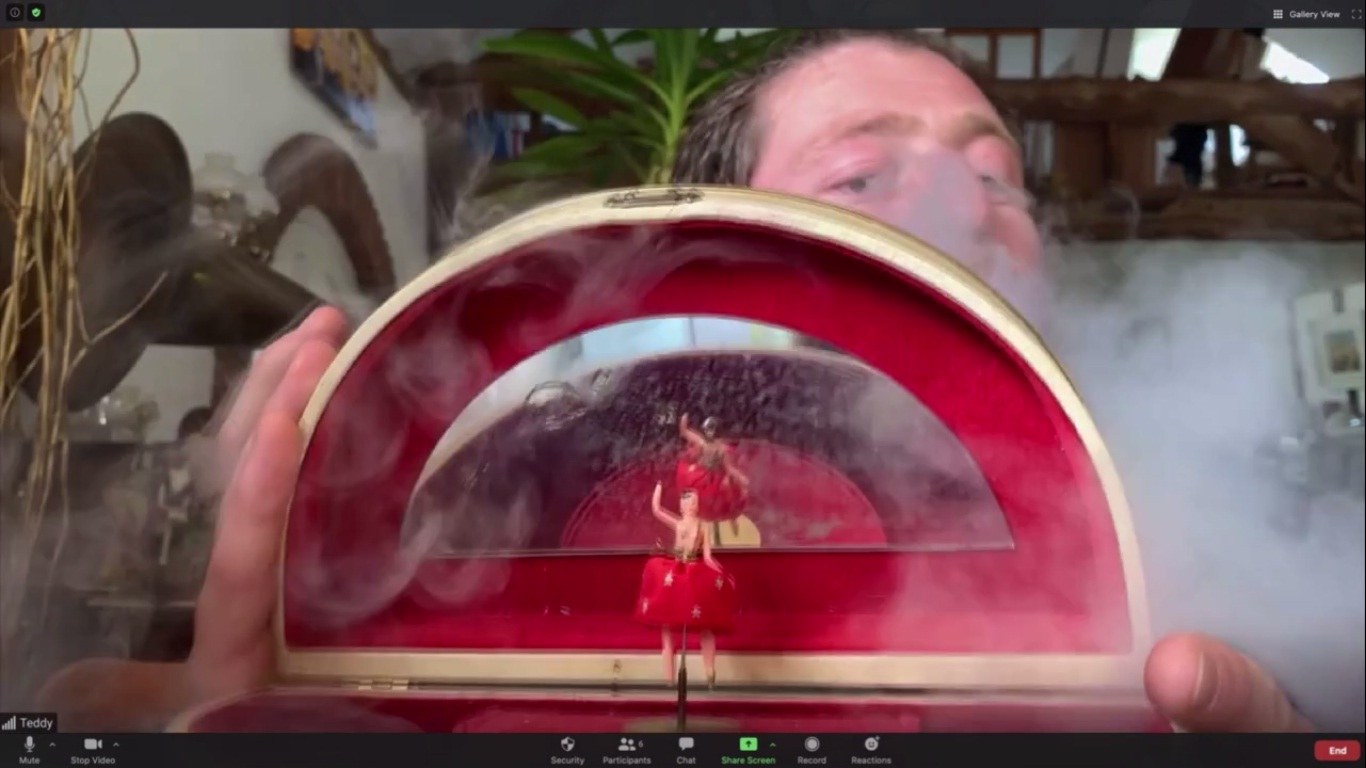 Teddy leaves the meeting much before the girls begin the séance. However, towards the end of the film, he, too, joins the zoom session and encounters the same fate as everyone else. As a viewer, you can’t help but wonder if Teddy would have survived if only he had stayed away from the meeting. Although it seems pretty apparent that he only becomes a victim of the ghost after he joins the meeting, the early scenes of the movie suggest that his fate was already sealed. In one of the opening scenes, Teddy shows a creepy music box to the girls and even blows off some smoke on it while playing its music. In the closing moments, Teddy finds the same music box in his garage after being chased down by the spirit and then magically catches fire and dies. These two parallels suggest that the ghost was with them long before Gemma started making up stories.

Although it isn’t directly implied anywhere in the film, the film’s representation of the ghost seems to allude to a mystical practice known as Collective Thougtforms/Tulpa, through which one can bring thoughts to life. Now, creating a Tulpa is almost like creating an imaginary friend, with the only difference being that the imaginary friend has its own thought process. Think something along the lines of Tyler Durden from ‘Fight Club‘ or Freddy Krueger from ‘Nightmare on Elm Street.’ Speaking of ‘Fight Club,’ one may recall how the voices in the narrator’s head keep referring to him as Jack. “Jack’s smirking revenge,” the voice says. Coincidentally, even the tulpa portrayed in ‘Host’ is named Jack. 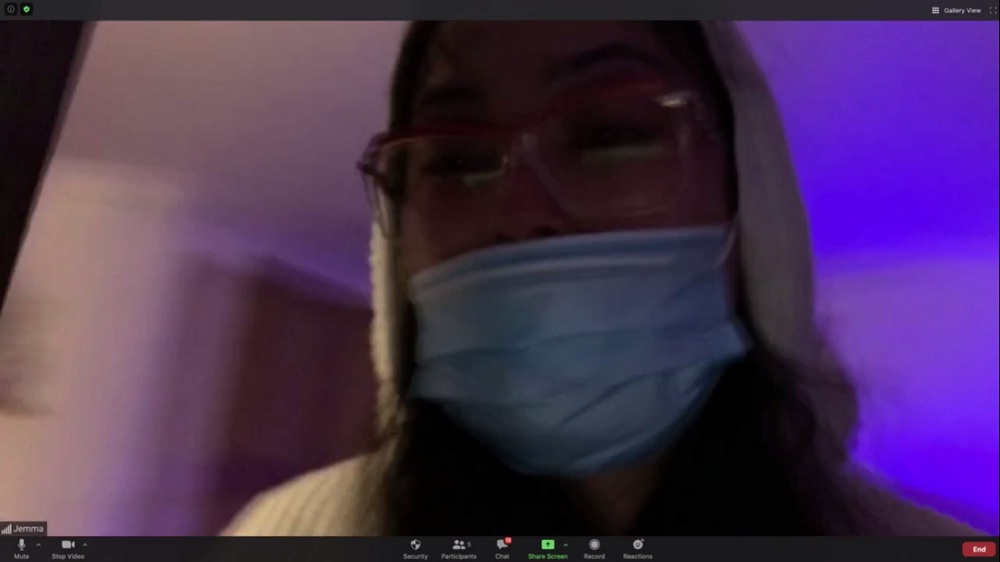 As many viewers would be able to tell, the film uses the current situation of the world to instill scares. Even in the movie’s setup, the characters choose to get together on a zoom meeting because the Covid-19 situation does not allow them to meet in person. By doing this, the film also shows the kind of helplessness that comes with the pandemic. When the possessions of the ghost begin, all the girls are together in the zoom meeting, but they feel helpless because there’s nothing they can do to save each other. And of course, going out of their homes isn’t a viable option either.

Along with that, the movie also uses several features of the zoom application to instill timely jumpscares. For instance, in Alice’s case, the film uses mask filters to scare viewers, and in Caroline’s case, it uses the popular Zoom background loop. Other than that, the movie’s mask sequences pay homage to another cult horror film, titled ‘Alice Sweet Alice.’ Similarly, even the polaroid scene draws its inspiration from ‘Lake Mungo.’ In the closing moments, when almost all the characters are dead, Haley’s chatbox says that she has 13 unread messages. The number 13, again, is just a metaphor for all the superstitions surrounding the unlucky number.

The mask is an homage to one of our favourite slasher movies, Alfred Sole’s “Alice Sweet Alice” – also streaming on Shudder! #HAPPYSPOOKIES pic.twitter.com/0dWFNr1GDJ

The idea for this polaroid scare came from the creepy photos in Lake Mungo, a hugely underrated classic that you ALL need to see. #HAPPYSPOOKIES pic.twitter.com/tJya0SdQ4O