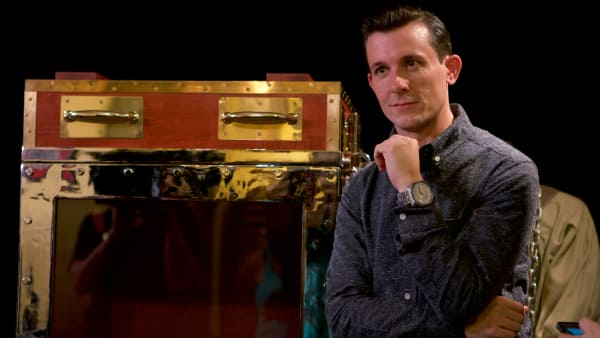 Magic has always appealed to human nature, and it is only human always to wonder “how did they do it?”. In fact, half the fun of watching magic, illusion, or escape act is trying to figure out exactly what the trick is. In the Science Channel documentary series – Houdini’s Last Secrets – George Hardeen, the great-nephew of the legendary illusionist and notable escape artist Harry Houdini, brings together a highly qualified team of experts to try to dig into the master artist’s life and work, and to try to deconstruct how some of his most famous acts might actually have been accomplished. This four-part series seeks to discover and lay bare the seeming mystery behind catching a speeding bullet, living through burial and escaping from being locked inside a water torture tank. Produced by Megalomedia for Science Channel, Houdini’s Last Secrets promised to be more than just another “magic tricks revealed” act.

“Harry Houdini is the definition of mind-blowing,” said Science Channel GM Marc Etkind in a statement. “He was clearly ahead of his time when it came to using engineering to accomplish his stunts, so much so that his methods continue to be debated by today’s master magicians. It’s no wonder that just the name Houdini still stirs the imagination of people, nearly a century after his death.”

The series Houdini’s Last Secrets stars descendent George Hardeen as himself, as he sets out to uncover more about his legendary and almost mythical-in-his-reputation ancestor with a team of experts like Jason Avent, Salina Cram, Lee Terbosic, Steve Wolf, John Cox, and more. The team includes professional magicians, illusionists, engineers, and others, to investigate Hardeen’s great-uncle’s illusions and death-defying escapes to try to uncover his methods and the science that went into making his acts.

Houdini’s Last Secrets Plot: What is it about?

The format of the show is simple. Each episode of Houdini’s Last Secrets will look at one of his most famous acts. The four episodes aired so far opened with his water torture cell escape, and also looked at the mindboggling acts of live burial escape and catching a bullet. Houdini’s Water Torture Cell escape was, arguably, one of his most famous acts. And the team of experts does a credible job of making believe that they might have possibly discovered the secret. They created a similar cell and tried to figure out how they would escape it.

It also documents his breaking out of a Siberian prison and recreates this escape in order to investigate this amazing feat that cast doubts of Houdini being an American spy. Their investigation of the Buried Alive trick was an apt pick for the final episode of the first season of Houdini’s Last Secrets since it is one of the least examined or explained tricks of the master. The examination of the ways in which Houdini could have escaped, or how the trick might have been set up, is intriguing, to say the least. The series also explores lesser-known facts of the illusionist’s life, such as his movie career, and his never-ending fight to discredit fake spirit mediums who defrauded innocent people.

The mystique and celebrity of the Man behind the legend are the stuff of this show which also looks into the personal life of the famed artist through scrapbooks, actual letters, his original plans, and so on, to analyze his fame and look at the real legacy behind it. They also had an incredibly rare and valuable artefact, in the two page Houdini design document.

There was some concern, in many circles, of it being a genuine exposure show. But the show has managed to successfully toe the line keeping the investigation real but avoiding exposure. The real methods of the master, whether by lack of knowledge or by choice, his genuine secrets, remain a matter of knowledgeable guesswork and endless speculation – just as a true artist deserves!

Houdini’s Last Secrets Season 2 Release Date: When will it premiere?

Houdini’s Last Secrets premiered on January 6, 2019. The series, overall, has earned viewer’s appreciation for its fact-based and science-engineering based explorations, while drawing flak from some quarters about its speculative undertone of examining whether Houdini was a spy for the US government. The investigations into the acts themselves, and the creative recreations of how they might have played out before an audience are being appreciated as done well. And fans of the master escape artist appreciate the fact that it does not disrespect Houdini, and actually adds to the public fascination with him!

However, despite all the interest it has generated, the show has not been renewed, yet, and there is no word of a possible date for the premiere of a season 2. Our best guess is that season 2 of Houdini’s Last Secrets would release sometime in early 2020 and proceed to uncover the mystery behind the other acts he performed during his lifetime.

The greatest of magicians, Harry Houdini’s mystique lives on, and his death-defying escapes remain as mysterious as ever. Here is a sneak peek into the series.