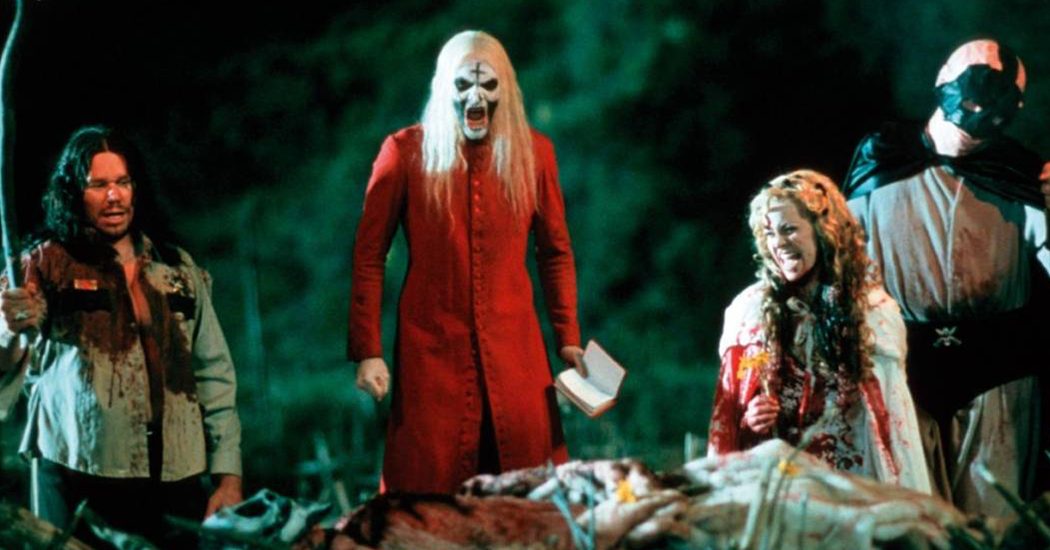 ‘House of 1000 Corpses’ is an important film for various reasons. Drawing inspiration from 70s classics like ‘The Texas Chain Saw Massacre’ and ‘The Hills Have Eyes,’ the film ushered in a resurgence in interest in old-school horror movies. It marked the directorial debut of Rob Zombie, a veteran of the music industry and the former frontman of the heavy metal group, White Zombie. He also wrote the script and co-created the movie’s memorable music with Scott Humphrey.

Although the black comedy horror film garnered mostly negative reviews from the critics, it earned $16.8 million at the box office against its steep $7 million budget. The film has since come to be regarded as a cult classic and spawned two live-action sequels and an adult-animated musical comedy film. SPOILERS AHEAD!

The first half of the film is set on Halloween eve in 1977. Two petty criminals try to rob Captain Spaulding’s Museum of Monsters and Madmen, located in the fictional town of Ruggsville, Texas but are killed in the process by the business owner (Sid Haig). Four young people, Jerry Goldsmith (Chris Hardwick), Denise Willis (Erin Daniels), Bill Hudley (Rainn Wilson), and Mary Knowles (Jennifer Jostyn), arrive in town and visit Captain Spaulding’s store as it also serves as a gas station.

They are on a cross-country trip to write a book on unique roadside attractions. When they hear about the local legend of a mass murderer named Dr. Satan, their interest is piqued. They go to see the tree from which he was supposedly hanged and spot a hitchhiker, Baby Firefly (Sheri Moon Zombie). She welcomes them to her house, where pandemonium and horror ensue. The rest of the film takes place on Halloween Day and shows the macabre and grotesque acts that the members of the Firefly family perform on their new victims.

According to Zombie, the idea for the film first came to him while he was trying to create a haunted house attraction with the same title as the film for Universal Studios. Zombie is a life-long fan of horror movies, and its influence can be felt in his works across various mediums. His music is known for having distinctive horror and suspense motifs in them. ‘House of 1000 Corpses’ is essentially a love letter to all the essential entries in the genre in the last seven decades, from films as old as the 1932 horror-drama ‘Freaks’ to the 1997 sci-fi horror ‘Alien: Resurrection.’

Generally, with films like these, the story’s focus tends to remain on the victims. Zombie subverts this norm and builds his film around the Firefly family, Otis (Bill Moseley), Mother Firefly (Karen Black), Tiny (Matthew McGrory), Rufus (Robert Allen Mukes), Grandpa Hugo (Dennis Fimple), and Baby. He turns the four main victims in the film into mere props. Their sole purpose is to push the story forward. And here, Zombie’s ingenuity as a filmmaker shines through. He realized pretty early that the story’s perceived antagonists are so naturally entertaining that they overshadow the main characters, and it will be a catastrophic folly to spend more time on the victims than necessary.

After the four young people are taken captive by the Firefly family, the film shifts to a categorically different gear. It turns out that they have been murdering people for years. Just before Bill and others’ arrival, the family kidnapped a group of cheerleaders, whom they are slowly torturing to death. Bill is the first one to be killed among the new captives. His body is then mutilated by Otis and transformed into one of the specimens that are often found in roadside attractions. Denise’s father arrives at the Firefly property with Lieutenant George Wydell (Tom Towles) and Deputy Steve Naish (Walton Goggins) to look for his daughter, but all three are killed.

Later in the night, Otis skins the dead body of Denise’s father and wears the mask and the vest created from the treated flesh before he goes to prepare the remaining victims for a new bout of sufferings. Zombie never tries to reign in the utter insanity that takes place in almost every scene of the film. The movie is surprisingly colorful despite its dark themes and feels like a carnival-esque celebration of murder and mayhem. Among the Fireflys, Otis is inarguably the worst. Aside from killing and skinning people, he is also a rapist and necrophiliac. Because of her traditionally beautiful look, Baby serves as the perfect bait to bring in new victims.

Otis decides to fulfill Jerry’s wishes and helps them meet Dr. Satan (Walter Phelan). The victims are dressed in adult-sized bunny costumes and taken to an opening to an old mine shaft. Mary tries to escape but is hunted down by Baby, who, after murdering the other woman, licks the blood clean from her blade. Jerry and Denise get lowered into the mine shaft. After they hit the ground, they are immediately attacked by the erstwhile victims of the Firefly family and failed experiments of Dr. Satan. They drag Jerry away.

As Denise makes her way through the tunnels, she spots other mutated people and various bizarre things. She suddenly discovers that she is at an opening that serves as Dr. Satan’s laboratory. The infamous murderer is still alive, although a metal ribcage secured to the roof is holding him straight. Jerry is on the operating table in front of Dr. Satan, getting vivisected. As a horrified Denise looks on, Jerry dies. Serving directly under Dr. Satan is the mutated behemoth known as the Professor. He later turns out to be the patriarch of the Firefly family, Earl.

As he chases after Denise with an ax, she cleverly makes him swing the weapon at the beam holding up part of the roof of the mine. The tunnel collapses on him, instantly killing him. Denise manages to get out of the mine and is found by Captain Spaulding. After she gets into his car, she loses consciousness. It is revealed that Otis was hiding in the backseat of the car. When she wakes up, she finds herself back inside the mine, on Dr. Satan’s table. This final sequence indicates that Captain Spaulding’s Museum of Monsters and Madmen is part of the Firefly family’s lure to draw in hapless individuals.