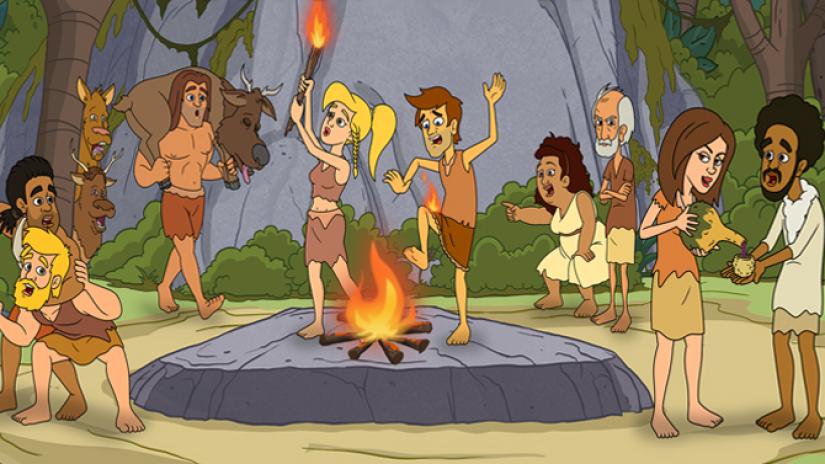 If you are into adult animation, Facebook Watch has you covered. In its efforts to more attract viewers to its video streaming platform, the platform launched several new shows in 2019. One of them is ‘Human Discoveries’, which is a cartoon show set in the prehistoric era. An animated comedy series, ‘Human Discoveries’, transports us to the dawn of human civilization. Co-produced by ShadowMachine (‘BoJack Horseman‘, ‘Pinocchio’ and ‘Robot Chicken’) and Ninjas Runnin’ Wild, it is created by Chris Bruno and David Howard Lee. The show joins Facebook Watch’s slate of animated programming, which includes shows such as ‘Liverspots and Astronots’ and ‘Human Kind Of’.

Human Discoveries: Who is in it?

‘Human Discoveries’ features a talented, star-studded cast, including Zac Efron, Anna Kendrick, Lamorne Morris, Jillian Bell, Paul Scheer, and Lisa Kudrow. Efron and Kendrick serve as the voice-over artists for two of the central protagonists. The duo already has some experience of working in the voice-acting world. While Efron gives his voice to Univeral’s animated adaptation of Dr. Seuss’s ‘The Lorax’, Kendrick voices the character of Princess Poppy in DreamWorks Animation’s ‘Trolls’ franchise. Scheer portrays the role of a muscled, hunter character.

All the voice artists are expected to return if Facebook decides to renew the show.

Human Discoveries Plot: What is it about?

The story revolves around a group of friends who lead a livelihood in the dawn of human civilization. As the episodes unravel, we witness how they discover basic necessities including fire and the wheel. They also, for the first time in history, unearth humanity’s best and worst creations, comprising art, alcohol, fashion, racism, gossip, and monogamy. As we witness some of the modern idiosyncrasies via a prehistoric lens, we see how these fictional characters suffer their first hangover after drinking rotten grape juice. It is also interesting to note their confused reactions when they stumble upon the concept of monogamy!

Set 10,000 years ago, the show in its own comedic way, portrays how our early ancestors try to understand the norms of the first-established society and navigate its various challenges. Somehow, the situations they face do resonate with the modern scenarios of today. For instance, letting other people be jealous when they go on vacation, getting fully hammered at wild parties, and spending more than planned the following day. There are also issues related to gender equality. Overall, it sounds pretty much like social commentary, minus the more serious tone.

Since the show is set in prehistoric era, it can go on to portray’s human’s journey into civilization. Which means, if it gets renewed for a second season, there are abundant new possibilities.

Human Discoveries Season 2 Release Date: When will it premiere?

‘Human Discoveries’ season 1 premiered on Facebook Watch on July 16, 2019. It is a part of the video-on-demand streaming platform’s endeavor to create original content that builds a fan base via interactive social features like Groups and Watch Parties. As per Matthew Henick, Facebook’s head of content planning and strategy, “Investing in content that drives meaningful interactions is core to our strategy.” He further added, “Shows like ‘The Real World’ and ‘Human Discoveries’ not only have the potential to be buzz-worthy and immersive, but their concepts also make it possible to leverage the social fabric of Facebook in unique and creative ways.” As per the statistics of 2018, Facebook Watch attracts 75 million global Facebook users who spent a minimum of one minute per day on the channel. This sums up to an average of 20 minutes of video being streamed daily. Although the progress of the platform itself is tad slow, we are sure that it will soon be huge enough to compete with the likes of Hulu, Netflix, and Amazon.

Now, as far as a renewal is concerned, we have not received any official update from the creators yet. Though considering the success of shows like ‘Sorry for Your Loss‘, it isn’t far fetched to imagine ‘Human Discoveries’ also treading a similar path and getting renewed . Also, the show is both funny and informational, we are very positive about show’s future. If renewed, ‘Human Discoveries’ season 2 can premiere sometime in July, 2020.

Below is the official trailer for ‘Human Discoveries’ season 1. You can also head to show’s official site if you wish to be catch all the previous episodes.