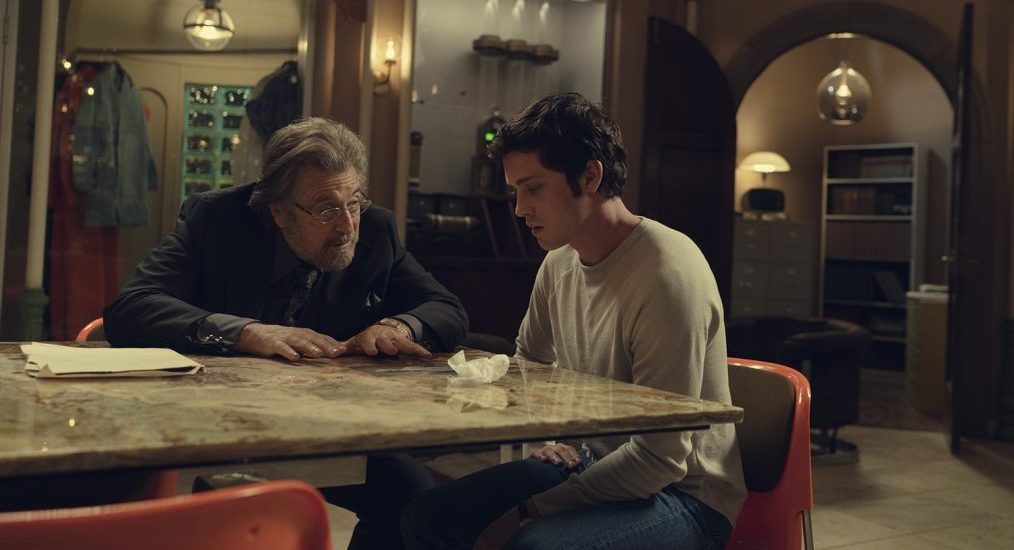 The fact that Amazon Prime’s ‘Hunters’ stars Logan Lerman and Al Pacino is sure to pull millions of viewers. The series is what a more fictionalized version of ‘The Americans’ might have looked like, from an opposite point-of-view, revolving around the Nazis instead of the Reds, told with an ‘Inglorious Basterds’ like gusto.

To sum up the show’s premise: a bunch of vigilantes attempt to thwart a Fourth Reich in 1977 U.S.A. with an endless stream of Nazis to kill stylishly.

‘Hunters’ definitely has tons of firepower when it comes to the potential it holds. Al Pacino and Lerman attempt to recreate the paternal bond that worked for Spiderman and Iron Man in ‘Avengers.’ Plus, Jordan Peele is associated with the project as an executive producer, leaving viewers to search for subtle, sub-textual messages. But that hunt might just result in the discovery of zero needles in gigantic piles of meticulously decorated haystacks.

‘Hunters’ opens with a brilliantly shot opening sequence set in the luxuriously spacious backyard of a Maryland family’s home in June, 1977. Kids swim in the pool while the father barbecues merrily. A couple enters. The woman freaks out at the sight of the father, calling him a Nazi and “The Butcher.” The Butcher shoots everyone (including his own family), fearing that his cover might have been blown.

Then, we are introduced to Jonah (Logan Lerman) who gets roughed up by a jock he’s trying to sell drugs to. His day gets infinitely worse when his grandmother gets shot in his house by a man wearing a black hat and black, half-mask. The Butcher contacts an associate (let us refer to him as “The Handler.”) tasking him with making a Congressman pass a certain bill. The Handler performs his job menacingly, threatening the Congressman at a bowling alley.

At the funeral of Jonah’s grandmother, Jonah meets Meyer Offerman (Al Pacino) who gives him his visiting card. Next, he finds a bunch of letters in his grandmother’s drawer revealing her acquaintance with Offerman from the WWII days. He also finds a dagger. At Cape Canaveral, Florida, an aged woman gets locked inside her shower and murdered when poisonous gas starts to ooze out of the showerhead. An FBI agent, Morris is tasked to investigate and she immediately detects the gas.

At Offerman’s house, Jonah and Offerman play chess. Offerman tells him of a certain Auschwitz guard, Heinz Richter who would get beaten at chess by a Jew named Markus each time. When Markus gets imprisoned at a Jewish concentration camp, Richter starts to force him to play chess with other Jew prisoners as set pieces. The “pawns” would be forced to kill each other, in accordance with Markus and Richter’s moves in the human chess game. Later, Markus tries to kill the guard but gets shot before. He does leave an X mark on Richter’s neck though.

Jonah finds a secret room at Offerman’s house where he finds a picture of his grandmother’s killer. Offerman asks him to leave, but Jonah runs away with the photo. He is able to detect a toy store logo in the picture and goes there. The toy store owner has an X mark on his neck, confirming the fact that he is Heinz Richter. Jonah tries to kill him but ends up getting tied by Richter. Offerman saves Jonah.

Morris questions a couple of NASA officers since the woman was a researcher there. The officers do not reveal the project that the now-dead woman, Dr. Fisher had been working on as it is classified information. At Dr. Fisher’s house, Morris finds a picture inside a bible: of Hitler shaking hands with a young woman (presumably young Dr. Fisher).

Offerman takes Jonah home and tells him about “the Hunt.” Jonah’s grandmother had spotted several Nazi officers from her Auschwitz days living in the United States as free men. Then, Offerman and she had started to track and kill them. Offerman introduces Jonah to the team of Nazi-hunters who had apparently been tailing Jonah as a protective measure.

Then, a post-credits scene reveals The Handler meeting a female colonel who wants him to investigate the murder of two of their colleagues. The colonel informs him of a plan to start the Fourth Reich…

Let’s start with the good. The first episode of ‘Hunters’ exudes style from every frame. The cinematography is extremely eye-appealing and pairs fluidly with the impressive camerawork. Several shots deserve to be framed simply for the way they have been shot. The period setting is nailed to perfection with tons of references and the production designers could not have done a better job at it.

The background score is effective and the dialogues pack a punch. The most memorable one for me would have to be “only the dead know the end of war.” All the acting performances are seamless with none of the characters feeling staged.

However, the first episode of ‘Hunters’ is a rare instance when the storytelling overpowers the actual story, in a negative manner. One would rarely hope for a story to be told rather than shown, and that is the case with this episode. It surely packs tons of style, but rarely any substance. It could have easily been told in less than an hour, instead of the torturous 90-minute runtime.

The episode’s plot is all over the place, when it could have been more focused. The series is clearly trying too hard. Yet, it feels dated. ‘Hunters’ is a reminder that viewers are probably saturated with the anti-Nazi tale. We have seen so many of them that hardly anything in the episode comes off as shocking.

Moreover, the first episode pays a lot of attention to the characterization of Jonah. Frankly, it feels pointless. Viewers have seen Lerman play the lanky, not-so-strong boy called-into-action enough. Hence, a brief introduction could have served the purpose of introducing Jonah. We get it: he is physically weak but his inner strength will help him overcome all the odds.

Lastly, why was the Nazi-hunting squad introduced towards the end? The introduction of the team is perhaps the only scene that might make viewers stick around for episode 2. Here’s hoping that each of them don’t receive the same sluggish treatment that Jonah’s character did.

In a nutshell, ‘Hunters’ is the dish that gets spoilt by too many recipes. It is definitely plated and presented well though: but that’s about it.

Read More: Where Was Hunters Filmed?