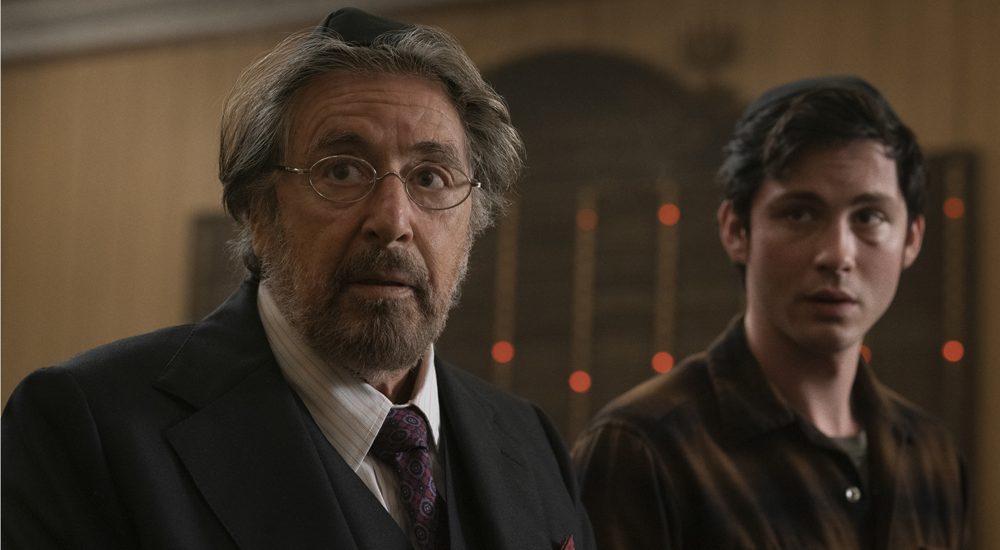 Amazon’s ‘Hunters‘ tells a truly wild tale! Some reviewers have declared the series to be a hybrid of ‘The Avengers‘ and ‘Wolfenstein.’ On the other hand, others have compared it to ‘Inglorious Basterds.’ Its themes of religion have also led to comparisons with ‘Preacher.’ Al Pacino and Logan Lerman headline the series’ cast and one could not have asked for a better duo. Apart from that, Jordan Peele serves as the executive producer of the show. He has gained large-scale prominence after ‘Get Out’ for presenting stories that drive cultural discourses.

What is Hunters About?

‘Hunters’ follows a team of vigilantes that seem to be borrowed out of a comic book series. Instead of fighting supernatural forces, the team hunts Nazis living in the United States of America in the year 1977.

Logan Lerman plays the character of Jonah: a boy who loses his “savta” or grandmother to a Nazi. After that, he becomes a part of the Nazi-hunting team started and led by Al Pacino’s character, Meyer Offerman. For Jonah, the fight begins as a form of personal revenge. However, he soon becomes convinced that the battle is for a larger purpose.

History of Nazism in America After World War 2

Contrary to popular belief, the entry of Nazis into the United States started even before the Second World War came to an end. The American government started to reach out to Nazi officers even before the war was officially over. The competition for supremacy between the United States and the USSR had started to become imminent. The American government feared that the Soviet Union would force German scientists, professionals and experts to advance its own scientific and technological research.

Approximately 1,600 scientists were recruited by the USA, some of whom weren’t even highly skilled. However, some of these had even been involved in the development of chemicals used in gas chambers. This highly secretive program was known as Operation Paperclip.

Moreover, the FBI and the CIA also started to recruit spies and informants, many of whom turned out to be unreliable. Some estimates mention as many as 10,000 Nazis living in the United States at one point in time.

In the sixth episode of ‘Hunters,’ it is finally revealed that the Nazis seen on the show were brought by the American government as a part of Operation Paperclip. However, these scientists and professionals were not known to be politically active (in terms of rooting for a Nazism/anti-Semitism) or be a part of any secret organization attempting to begin the Fourth Reich in the USA.

In fact, the organization still seeks to pursue justice to any Nazi war criminal who might be roaming free. The organization was founded in 1977, and the fact that ‘Hunters’ is set in the same year indicates that the Nazi-hunting team depicted might have been inspired by the Simon Wiesenthal Centre.

However, the Simon Wiesenthal Centre pursued justice “the correct way,” in the words of one of the characters of ‘Hunters,’ Morris. The swashbuckling, vigilante group depicted in ‘Hunters’ is pure fiction. It is more like a loose adaptation of actual facts. However, the second episode of the series highlights an archive of information related to Jewish victims collected by Jonah’s grandmother, titled “the Ark”,” after Noah’s Ark. In all probability, this was inspired by the documentation activities of the Simon Wiesenthal Organisation.

In the sixth episode of ‘Hunters,’ Kenneth asks Sister Harriet whether she is a part of the Wiesenthal. This might have been some form of allusion to the actual organization that Al Pacino’s team was probably inspired by.

How Many Nazis Were Actually Killed in the United States?

Did the Nazis Actually Try and Store Their Treasure in a Swiss Bank?

In the fourth episode of ‘Hunters,’ the team comes across a massive room filled with Nazi treasure. It turns out, that most of the valuables in the room were looted from individual victims of the Holocaust: mostly Jews.

Interestingly, a report by the American government highlighted conclusive evidence regarding the storage of Nazi war loot in Swiss banks, worth billions of dollars. The loot contained watches, gold dental fillings, rings and other forms of jewelry. In fact, the total value of all the looted gold amounted to $366 million in 1996!

Were There Very Few African-American FBI Agents in 1977?

One of the characters in ‘Hunters’ is Millie Morris, a female, African-American FBI agent. The series touches upon Morris’ struggle of fitting in and being taken seriously because of her gender and her race.

Interestingly, on June 2, 1976, Special Agent Sylvia Mathis became the first-ever African-American female FBI agent. For Mathis, it wasn’t just racial discrimination that she had to defeat. At that time, there were only 40 female FBI agents out of 8,500 (none of them African-American). Given the fact that ‘Hunters’ is set in 1977, it is highly likely that Millie Morris’ character is inspired by the real-life FBI agent, Sylvia Mathis.

Were There Nazis in NASA?

In the first episode of ”Hunters,’ Dr. Fischer, a NASA researcher suffers a tragic death when poisonous gas starts to ooze out of her showerhead. It is later revealed that Dr. Fischer used to work for Nazi Germany’s Space Program.

It turns out, a NASA astronaut named Wernher von Braun also died in 1977 (the time that ‘Hunters’ is set in). Braun was the face of the American space program and it is widely believed that the Apollo 11 moon landing would not have been successful without his contributions.

However, what many people do not know is the fact that Braun used to work for Nazi Germany’s space program before being picked up by the American government. He was responsible for designing more than 3,000 missiles that were used against Britain and other nations.