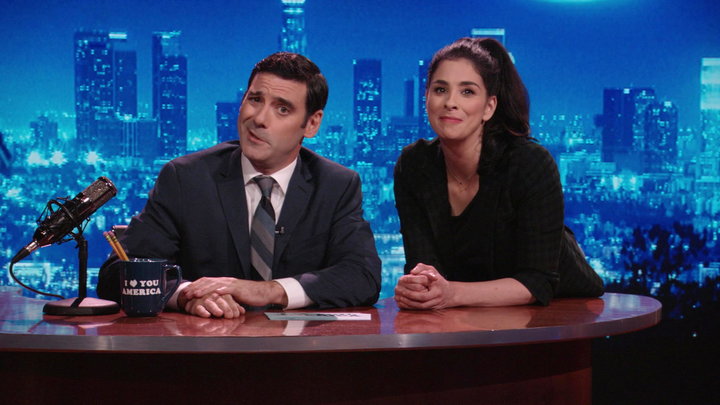 Sarah Silverman is one of the very few original, funny, and iconic working female comics out there. Her comedy addresses social taboos and controversial topics, such as racism, sexism, politics, and religion, sometimes having her comic character endorse them in a sarcastic or deadpan fashion. A recipient of two Emmys, Silverman started her career at SNL, like all other leading comics today. She quickly graduated to small roles and eventually became a Hollywood star. Now, she has her own late-night talk show, which has been renewed for a season two. Structured like other talk-shows, this one features Silverman exclusively talking about her personal experiences and through them viewing contemporary issues of significance. Here’s all we know about season two and a possible season 3.

I Love You, America With Sarah Silverman Cast: Who is in it?

Since the show is a talk-show, consisting of a monologue, interviews, and pre-taped segments, there aren’t a lot of people in the cast. It is just Silverman and Mather Zickel, and the guests who come on with each different episodes. The guest list is still to be disclosed by the network or Silverman. The tightly knit details are sure to arouse excitement and vigour among the fans of the show, who can’t really wait for a season three to happen. More to come as we hear.

I Love You, America With Sarah Silverman Plot: What is it about?

With the show, Silverman is “looking to connect with people who may not agree with her personal opinions through honesty, humour, genuine interest in others, and not taking herself too seriously. While it’s great to connect with like-minded people, Silverman feels it’s crucial, now more than ever, to connect with the un-like-minded.” She has described the show as an “accumulation of everything I’ve learned up to this point and then juxtaposed with this moment in time.” It is worth noting that the narrative of the show often takes to the tone and mood of Silverman and often digresses from a pre-planned cue. This unpredictable nature really doesn’t allow to speculate over what will she talk about. Wait and see, I guess! We will update this section if we find out.

I Love You, America With Sarah Silverman Release Date: When will it premiere?

I Love You, America With Sarah Silverman Season 2 released on 6 September 2018. All the eleven episodes of the season released on Hulu. In As far as the next season goes, we have bad news for the fans. In January 2019, Hulu announced the cancellation of the show. Considering the declining viewership of the show, it was expected that Hulu may not continue for another season. Though, fans should not lose all their hopes. There’s still a possibility that some other network picks up the show. If that happens, we will update you about I Love You, America With Sarah Silverman Season 3 release date.

I Love You, America with Sarah Silverman Trailer

Hulu doesn’t generally do trailers for the show as it is just a talk-show. Instead, we have for you here the catchy theme song of the show.