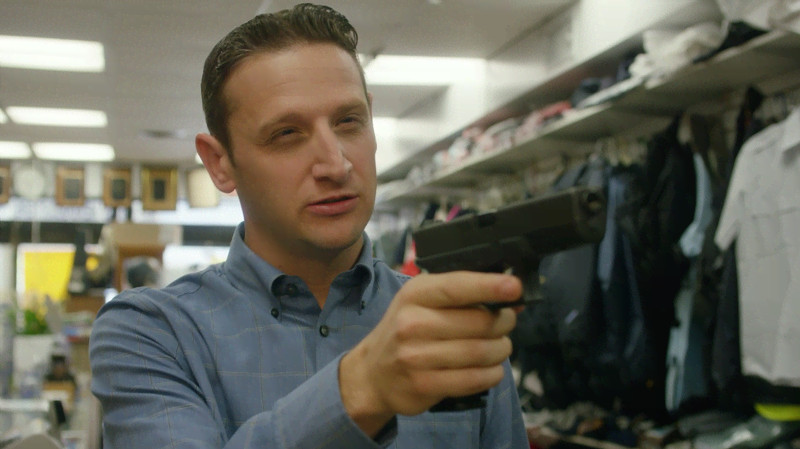 Saturday Night Live has given us some of the best comedians in the world. From Tina Fey to Jimmy Fallon– they started at SNL and then went on to become huge names themselves. Another such person who has started making his mark and can become one of the iconic comics of the coming days is surely Tim Robinson. Robinson has also got a show for himself called ‘I Think You Should Leave With Tim Robinson’ which he is producing along with Andy Samberg. We know Samberg from shows like ‘Brooklyn Nine-Nine‘. Samberg also makes regular appearances on Saturday Night Live.

‘I Think You Should Leave With Tim Robinson’ is directed by the duo  Akiva Schaffer and Dan Powell while Over Here Production is the developer of the show. Interestingly, Schaffer and Samberg are friends from college and they together used to make comedy videos for the internet. The show is a sketch comedy and thus it is right in the ballpark for Robinson who has been a constant hit while performing skits at SNL. The objective of the show is that the host, Robinson, and his guests, will be ridiculing someone so much that he/she desperately wants to, or is at least driven to the verge of leaving.

I Think You Should Leave With Tim Robinson Cast: Who is in it?

Because this show is a sketch comedy, some characters appear in most of the episodes while there are recurring characters and different guests on each episode. Of course, the main man of the show is Robinson, and if this show’s popularity reaches a certain height, he can also be considered by top channels like ABC and CBS as a new late night talk show host. And for a comedian, that is one of the biggest dreams come true. We have excluded NBC from the list as they already have three late-night talk shows- ‘The Tonight Show with Jimmy Fallon’, ‘Late Night with Seth Meyers’, and soon-to-premiere ‘ A Little Late with Lilly Singh’. Robinson joined Saturday Night Live in 2011, and since then, he has been a successful performer in their sketches. He does brilliant impressions of Ben Bailey and Bill Cowher.

Recently, we have seen Robinson in the sitcom ‘Detroiters’ with fellow comedian Sam Richardson. ‘Detroiters’ has received a lot of love from critics. Rotten Tomatoes says that the series is “Proudly stupid yet surprisingly soulful, Detroiters showcases an impressive level of commitment from its charming, well-matched leads — and balances its goofy humor with an equal helping of heart.” Interestingly, Robinson’s first attempt for a television show did not go very well and he was rejected by all the networks for a pilot he had made in 2011 called ‘My Mans’.

Andy Samberg is another important comedian who makes regular appearances on the show. Samberg was also associated with SNL for eight years- 2005 to 2012. Since 2007, he has been regularly appearing in movies like ‘Hotel Transylvania‘ (2012), ‘Hotel Transylvania 2’ (2015), ‘Hotel Transylvania 3: Summer Vacation’ (2018). However, Sanberg became a household name after he was cast as  Jake Peralta in the famous sitcom ‘Brooklyn Nine-Nine’. The comedian even managed to win a Golden Globe for his performance in the show.

I Think You Should Leave With Tim Robinson Plot: What is it about?

The show takes inspiration from the sketch comedy and late night talk shows that are a huge part of American television. Tim Robinson is the led character of the show where he calls different celebrity guests each day and does some funny bits involving the guests. These bits involve one particular thing that is the specialty of the show as the name suggests- Robinson and the guest insult someone so much that she/he is almost forced to leave the show.

After being with SNL for a long period of time, Robinson has become a master of doing funny sketches, and his sketches are hilarious, his comic timing is perfect, and his comedy is laced with enough doses of sarcasm leveled against some serious issues going on in the world right now. Robinson has also recently done an episode of the show ‘Netflix Presents: The Characters‘ which was also a sketch show of seven episodes with each episode having a different upcoming comedian playing the lead role. For his episode, Robinson played the role of a failed wrestler, a man eager to buy a gun, a limo driver and so on, placing each character in hilarious situations and drawing laughter from the audiences throughout the episode.

The most interesting thing about Robinson is that his performances are highly unpredictable, unlike usual comedians-turned-actors. Sometimes he can play an extremely goofy and ridiculous person, and then easily switch over to a serious performance, keeping the balance just perfect. ‘I Think You Should Leave With Tim Robinson’ is a show every comedy fan will enjoy.

I Think You Should Leave With Tim Robinson Season 2 Release Date: When will it premiere?

I Think You Should Leave With Tim Robinson Trailer:

While we wait for season 2, check out the season 1 trailer to refresh your memories. If you haven’t seen the show yet head over to Netflix to catch all the episodes of the first season.