If Loving You Is Wrong Season 5 Episode 10: When and Where to Watch? 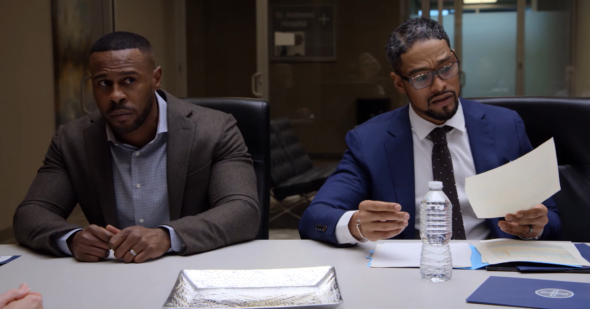 Tyler Perry’s ‘If Loving You is Wrong’ continues to thrill us well into its final season. One might think that viewers would get accustomed to the drama and twists, but the residents of the fictional Castillo Lane always manage to surprise us. Their complex network of relationships ensures that emotions are at an all-time high, and everybody has some ulterior motive. The final season has been a blast with a lot of focus towards who is the father of Alex’s baby.

In the last few episodes, we have seen the discontent between Eddie and Lushion bubbling to the surface. The former does not do himself any favors by recording Kelly kissing Lushion when he gets her out of prison. Eddie tells Natalie what went down, which puts her on the warpath, but Lushion is squarely coming for Eddie as well.

The last episode sees Eddie unleashing complete mayhem. He instigates Natalie and inserts himself in the discord brewing between Alex and Randal, and Brad and Marcie. Meanwhile, Ian and Larry have a falling out, and the firm might be at risk over how Kelly’s case was handled. With only a few episodes to go until the finale, you might be curious about what happens now in ‘If Loving You is Wrong.’ We have the rundown and information on when and where to watch the upcoming episode. We’ll also give you some inkling of what might happen.

If Loving You Is Wrong Season 5 Episode 10 Release Date: When Will It Premiere?

Where to Watch If Loving You Is Wrong Season 5 Episode 10 Online?

If Loving You Is Wrong Season 5 Episode 10 Spoilers:

We will see Eddie and Esperanza’s dysfunctional relationship coming to a head in the upcoming episode. The two have already been embroiled in a custody battle, which often turns nasty. It remains to be seen if Eddie can move past this latest hurdle. With almost everyone baying for his blood, one might be inclined to feel slightly sorry for him. However, seeing as how he’s interfered in nearly all relationships, to the extent of sowing seeds of discontent, whatever is headed Eddie’s way seems justified.

If Loving You Is Wrong Season 5 Episode 9 Recap:

“The Great Escape” is all about Eddie facing the consequences of his actions. Larry and Steven both threaten him, which is worrisome, to say the least since they are men who should be taken seriously. To top it off, Randal continues to play mind games and Ian stakes claims on his son.

Mika manages to flip out Esperanza, which is bound to lead to a confrontation between her and Eddie. All the chickens are coming home to roost as ‘If Loving You is Wrong’ enters the final stretch of the season. Hopefully, Eddie will get what’s coming to him, as the show attempts to tie up loose ends.