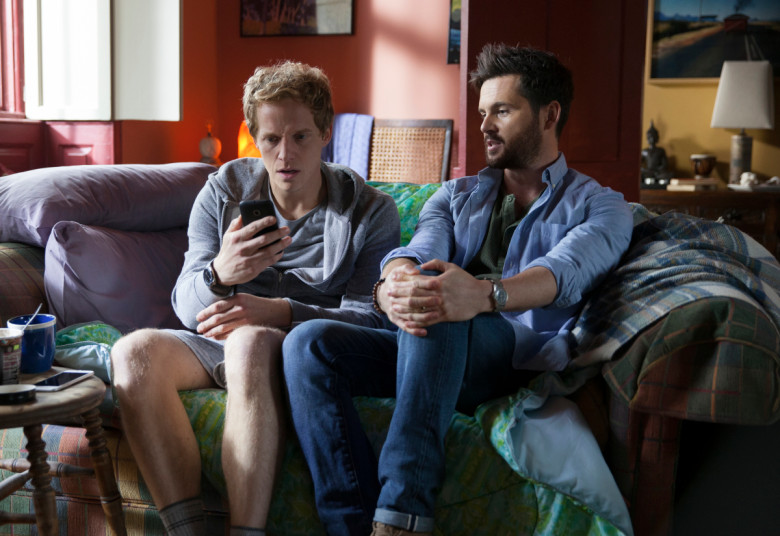 Charlie is young, living a healthy life, and is in the prime of his days. But as fate could have it, a breeze of silence and despair settles over his life. It is the news that he is diagnosed with Hodgkin’s lymphoma. Even though the cancer is still in its very early stages and the scenario looks very well for him, Charlie chooses to reject any kind of medical treatment. He supports natural remedies instead. His friends Joel, Tess, and Nadia are very disappointed with their friend’s decision and instead of allowing Charlie to keep on doubting the capabilities of medical science and digging his own grave, they decide to kidnap Charlie, confine him in an old mansion against his will and heal him with regular chemotherapy drugs. Written by Sam Bain and directed by Steve Bendelack, ‘Ill Behaviour’ season 1 comprises of six episodes.

Ill Behaviour Cast: Who’s in it?

The main of the show include Chris Geere (Joel), Tom Riley (Charlie), Jessica Regan (Tess), Lizzy Caplan (Nadia). The ensemble is expected to return to the show if the next season gets renewed. Any additional names in the cast will be announced after Showtime green-lights season 2.

Ill Behaviour Plot: What is it about?

The first episode of the show starts off with depressed divorcee Joel sitting on top of a high rack, throwing away cash worth two million dollars he has received as settlement from his wealthy ex-wife. He is pulled down by his schoolmates, the bright and young, Charlie and the aspiring author, Tess. They arrange a date for Joel with a girl named Nadia, who is an oncologist practicing in America. Her only negative trait is that she conducts operations under a great influence of alcohol and drugs.

However, the meet leads to an unexpected and shocking revelation. Joel learns that Charlie is suffering from cancer and is bewildered to discover that he is only using homeopathic medications. He convinces Tess into abducting Charlie with assistance from Nadia. They take him to an abandoned and isolated country house to forcefully administer the required medical treatment. Charlie, on the other hand, is not appreciating of their efforts, which is further fuelled when his wife Kira appears on television, reporting him as missing.

Right after Tess refuses Charlie’s suggestion to send for help, she encourages Joel to do something to calm Kira’s concern. He goes ahead and tells her that Charlie has been staying in the outskirts with Tess and helping her in writing her book. However, officer Talbot does not seem to be pleased with this. After Nadia takes a sample of Charlie’s sperm to preserve it for future use, she is amazed to learn how Charlie had also been dependent on alcohol and drugs and managed to overcome his addictions, bringing the two closer. The situation, however, heads downhill when Joel comes to know that Nadia has played a role in Charlie’s escape from the mansion. He and Tess go chasing after Charlie with a cross-bow and more unfortunate events arise.

Read More in TV Preview: The Devil Speaks | Too Stupid to Die

Ill Behaviour Season 2 Release Date: When will it premiere?

‘Ill Behaviour’ season 1 first premiered on July 22, 2017 on Showtime. The six-part mini-series was originally conceived as a 3-episode show by BBC, with each part having a runtime of 60 minutes. Once it was picked up by Showtime, it aired as a 6-part series, with each episode being 30 minutes in length.

The first season was well appreciated and fared well with the critics as well. However, at this point of time, the renewal status of the series seems to be a bit bleak. Although it did receive a good deal of positive response, its ratings were quite low. This does not mean that the series has ended, of course. If you have followed the trend of British shows, you would know that their decision for subsequent seasons is kind of dictated by demand for the art form. They don’t entirely work on a business model. Now, as per our predictions, we are not expecting another season anytime soon. But if there is any further development, we shall update this section with ‘Ill Behaviour’ season 2 release date immediately.

Here is a glimpse of the last season. Check it out to understand what this series is all about. Additionally, if you have not watched the show yet, head to Showtime and catch up on all its previous episodes.