Impractical Jokers S09: Everything We Know 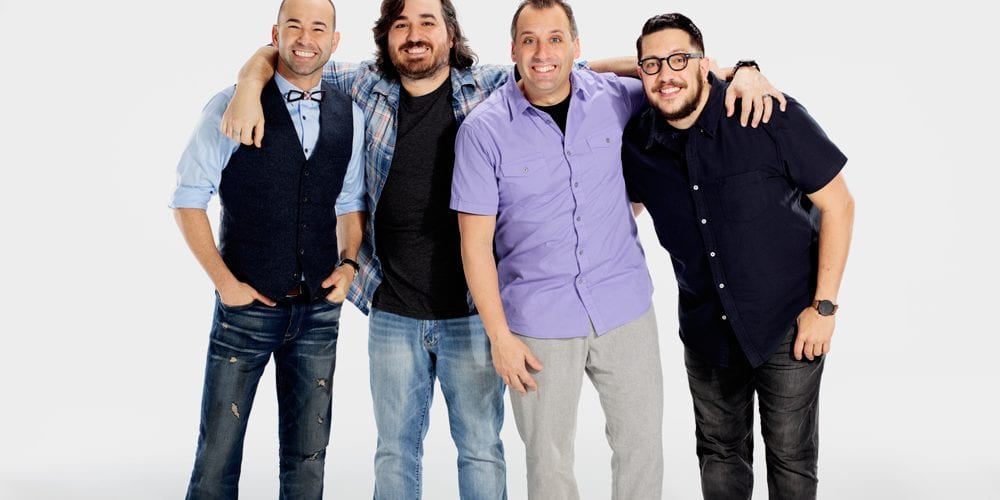 ‘Impractical Jokers’ is an American reality television comedy series that features a hidden camera. It first premiered on December 15, 2011, on TruTv and is produced by NorthSouth Productions. Directed by Peter Fowkes and P. J. Morrison, it is distributed by Warner Bros. Television.

The show basically centers around four comedians who coerce each other to pull pranks while being filmed on a hidden camera. ‘Impractical Jokers’ sets itself apart from other comedy shows by sticking to witty humor and eschewing the crudeness and slapstick comedy.

The genuine relatability and real friendship of these four “jokers” have earned them millions of fans all around the world. The ‘Impractical Jokers’ brand has developed over the years and is continuously growing to create one of the most original brands on television.

Ranked as the number 1 comedy series in cable among P18-49, garnering around 768,000 people in Live +7 viewing and attracting over 1.2 million total viewers each week, the show has spanned eight remarkable seasons to date. Read on to know all the details about Impractical Jokers season 9.

Impractical Jokers Season 9 Release Date: When will it premiere?

Well, there’s more news. On July 19, 2019, in the midst of the eighth season itself, the network announced that the show has been renewed for another season. The announcement was made during the fourth annual Impractical Jokers fan event at the Park at Petco Park in San Diego in the middle of a special live-streamed Q&A session.

Brett Weitz, general manager TNT, TBS, and truTV, confirmed the news saying: “For us, it’s a no-brainer to bring this show back for a ninth season and give the fans what they demand. The guys consistently bring the funny and we are proud to be home to their hilarious antics” — as reported by Deadline.

We don’t have an update on the release schedule yet. What we do know is, season 9 will consist of 26 episodes and the creators are gearing up for a 2020 release. Since season 5, the series has followed a schedule of airing the next season, around three months after the conclusion of its preceding season. If the show sticks to the above-mentioned schedule, we can expect Impractical Jokers season 9 to most likely premiere sometime in June 2020 — i.e around three months after the conclusion of season 8 in March 2020.

Impractical Jokers Cast: Who is in it?

For those unaware, Joseph “Joe” Gatto, James “Murr” Murray, Brian “Q” Quinn, and Salvatore “Sal” Vulcano, the main jokers on the show, were high school friends who went into comedy and improv. They formed the sketch comedy troupe called The Tenderloins in 1999.

This troupe witnessed immense success, even winning a $100,000 cash prize on NBC’s ‘It’s Your Show’. After this, they went into television and came up with an idea for a show, which was originally titled ‘Mission: Uncomfortable’, before being renamed as ‘Impractical Jokers’. Of course, when season 9 happens, the group will return to reprise their roles.

What is Impractical Jokers about?

‘Impractical Jokers’ is a hidden camera television series that involves four friends who love pranks and compete in extremely uncomfortable social experiments. The person who fails must take part in a specific inferior practical joke. These lifelong comedian friends partake in punishments and dare while a hidden camera is running.

The thing which differentiates Impractical Jokers with other prank shows is that the member who is performing the prank does not know the details of it until the moment they are performing it on random people or strangers.

Every challenge begins with the jokers explaining what the challenge is, where they are and what is going to happen if someone fails to perform a prank. Cameras are hidden in nearby locations to capture the action. The location of the challenge is generally a public area like a city park or some store in or around New York City.

The loser is always ready to face a punishment, which is more painful, disgusting, scary, embarrassing and humiliating than the challenge itself. Moreover, the punishment cannot be refused, else the joker will be kicked off the show.

What really stands out in this show is the friendship among the comedians and how they never fail to elicit a laugh from the audience. The jokers are also very sporting and if they can dish out the pranks on unsuspecting people, they can take the punishments too upon failing to pull off the pranks.

Check out the clip below to get a better idea of the gags and laughs this show offers, and one can only guess as to what pranks our favorite comedians have kept up their sleeves for the upcoming season, once it lands on tv screens.