Netflix’s ‘In The Shadow of The Moon’ Ending, Explained 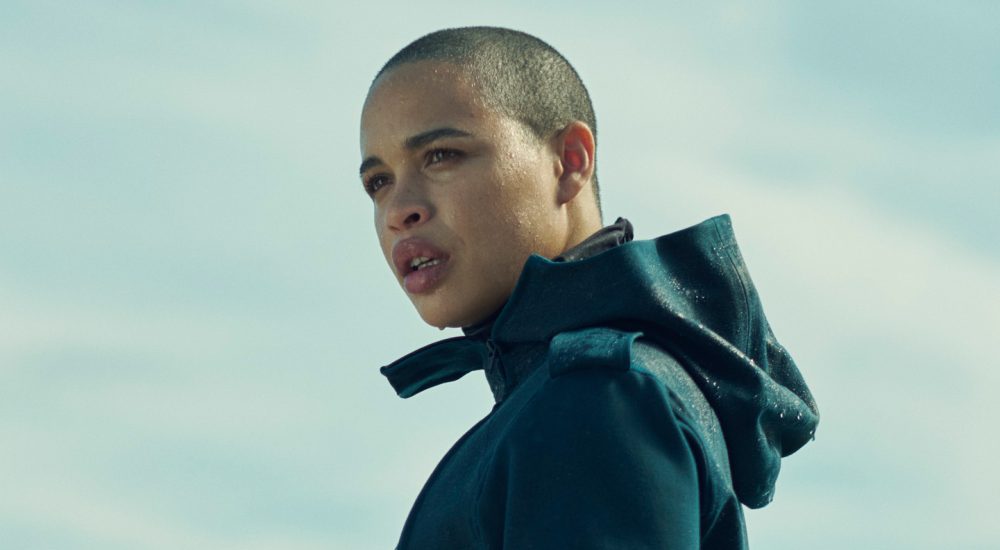 ‘In The Shadow of The Moon’, Netflix’s latest time travel mystery thriller is presented to us in four segments over the same day, nine years apart in 1988, 1997, 2006, 2015 and 2024. The first segment almost rolls out in a ‘Zodiac’ like fashion, unfurling as a murder mystery, before the protagonist realises the scientific implausibility of the events that transpire the first night in 1988, which is when the sci-fi aspects of the story take over. Here, we dissect the discussion into five distinct parts, the five years that the time-travelling assassin goes to in order to fulfil her mission. You can read my critical take on the film, here, but in the writeup, we assess what her mission was and how the backward time travel subsequently, actually yields results.

The film begins with a glimpse into the future, 2022 in Philadelphia where most of the film is set, and things as with most movies providing a glimpse into the future, do not look good. The city seems consumed by terrorist attacks and rioting, while fire, smoke and screams loom about large in the air. All of this soon subsides into a vision as we move backwards in time to 1988, where we enter the lives of Officer Thomas Lockhart, called Locke by his colleagues, and his pregnant wife. Tom is called upon that night on duty to respond to a series of seemingly unrelated deaths across the city which upon preliminary inspection seem to be the work of a serial killer.

All three victims of the night have blood pouring out of the orifices in their face, and their brain essentially melted, with cause of death identified as haemorrhaging. However, all three victims also have a triangular stab mark at the back of their necks, which makes it clear that they were injected with a foreign substance that resulted in their current condition. The poison too is identified as an unstable isotope that the forensics can’t identify. As Thomas grows increasingly intrigued with the investigation, he missed the call for when his wife goes into labour and is also frequently overstepped on authority by his detective brother-in-law.

Description from another victim yet to go into seizure from the attack leads Thomas and the entire police force in that area to chase the perpetrator, a black girl with a blue hoodie and a bloodied left hand. Their pursuit takes them to a subway station, where she is cornered and overpowers Thomas, attempting to escape but not before she tells Thomas about the complication his wife is going to suffer in her pregnancy, something that he is yet unaware about, and tells him that she will see him again. Just as she is about to leap, Thomas attacks her with the same weapon she used to inject people with, startling her while she dies coming in front of the arriving train. That night, Thomas witnesses the birth of his baby girl, but his wife dies of complications during childbirth, just as the mysterious killer had told him.

Nine years later, the same day, Thomas has made detective with his daughter all grown up. Thomas is shown increasingly caught up with his work, driving his daughter to his precinct for work. The detectives receive a call that it’s happening again, and they discover a series of victims with the same M.O, and the same haemorrhaging affects, with the same mark behind their necks. Thomas asserts that they need to reopen the case and re-examine evidence that they lay aside due to the death of the killer. He discovers a key to a plane on the dead perpetrator from nine years ago that had only been manufactured a year ago, and that operated only on one airstrip in the city.

While on his way there, he is contacted by Naveen Rao, a physicist, who explains to him that the rare lunar occurrence of a supermoon every nine years interacted with the EMT fields on earth to open portals to “another place entirely”, like a bridge. Naturally, he is scoffed at and following the lead from the key, he encounters the killer once again, alive and well. In the ensuing commotion, the killer shoots down Maddox as an unexpected casualty and takes an unconscious Thomas with her on the plane. Thomas is dropped in the ocean near a mysterious beach, where waking up the next morning, he also discovers the plane crashed and the killer, missing.

Thomas’ life has spiralled out of control as his daughter is now in high school, due for college in a few months and his obsession with the case has taken a toll on his personal and professional life. This segment too opens on the same day, but this time, Thomas is prepared to catch the mysterious killer who resurfaces every nine years, convinced that she was a time traveller from the future. What he also seeks from this is a sense of closure for himself from the events that transpired eighteen years ago leading to the loss of his wife.

From digging up the grave of one Harold Nowak, wrongly reported as dead from a drug overdose, Thomas discovers similar markings at the back of the neck of his skeleton that severed his spinal cord from the neck, implying that he was among the first victims of the mysterious killer he was trying to track.

Tracking his address down, he meets up with his wife and discovers that Harold had been at the spearhead of a movement called The Real American Movement, wherein he distributed hate spewing manifestos through copies of books on radical American values, acquiring the mailing list and learning of his ex-girlfriend, a Heather Russell who was his accomplice. He tricks his brother-in-law, Holt to acquire Russell’s address only to find her dead at her place and the killer, the same woman with the blue hoodie, hiding. He shoots her left hand while she tries to escape, which is where she gets the injury from travelling back in time. Thomas gives chase and sees her crawl through a sewer line into the device that is allowing her to travel through time. She escapes this time too.

Dr. Rao who had been under hiding all this time tests an isotopic compound on pigs, triggering them remotely hypothesising that they could also be triggered from a point of time in the future. He discovers Thomas camping on the beach where the killer disappeared nine years ago, patiently awaiting her return. Rao is convinced in his and her mission to be one, and therefore continues working towards figuring out time travel through supermoon lunar cycles and the remotely activated isotopic compound.

Seeing Thomas as a threat to his mission, he captures him and explains his agenda. While captured, Thomas is able to escape, hurrying to the beach where he expects her to turn up. She does, and while she is oblivious to his waiting, this being her first stop in travelling back from the future, he welcomes her with at gunpoint, prepared to shoot her in an attempt to undo everything that she did, theorising that this way, he would have been there for his wife the night she died.

Just as he is about to shoot her to close the loop, she discloses herself to be his granddaughter, revealing that she was sent back in time for this mission at his behest, and under Dr. Rao’s guidance. She also presents the same bracelet that he gave to Jeanie first, then Amy, who presumably gave it to her. She realises that time travel is going to be a one way backwards journey for her, since Thomas reveals to her that she dies in 1988 at his hand. She continues with her mission, inspiring him to return to his family in Amy, who is due to give birth to her today, and to move on, letting things happen the way they turn out.

The attack shown in the beginning of the film is shown to have been caused by the same radical group that Harold Nowak founded and headed through his revolution, describing their course of action in his manifestos distributed through books. The entirety of Dr. Rao’s plan is revealed, with him developing the technology to send Rya, Thomas’ granddaughter back in time to eliminate suspects, virtually anybody who was touched by Nowak’s theory and silent revolution that later develops to full blown civil war in 2024, starting off with large scale terrorist attacks killing thousands of people, and subsequently ending the world, as revealed by Rya.

Of course, since the technology or the device that he uses allowing Rya to travel back in time is based on the principal of the occurrence of lunar events that align the celestial bodies’ fields of gravitation with their electromagnetic field, therefore allowing Rya to operate only on four days, once every nine years in 1988, 1997, 2006, and 2015, in reverse chronological order, with 2015 being her first stop and 1988, her last, where she is incidentally killed.

Dr. Rao is shown triggering the remote isotopes that he developed from the future, killing off people they suspected to propagate or be part of the Real America Movement, responsible for the downfall for the world. This further goes on to prove the Baby Hitler hypothesis, but in the opposite sense since here they are able to correct the course of their future by travelling further and further in the past until the very genesis of that idea is eliminated, with their future not being entirely predestined.

Our further conclusion here is that all of the events until 2015 have crystallised, while the ones leading up to the civil war in 2024 don’t, as all the damage done and the entire timeline is shown to be erased after Dr. Rao is successfully able to eliminate the very last person part of the revolution, the final figment of the idea of the revolution of which Nowak was the genesis. And with him, eliminating the possibility that the ideology would carry forward through him, preventing a horrible future.