Netflix Review: ‘In The Tall Grass’ is One of the Weaker Stephen King Adaptations 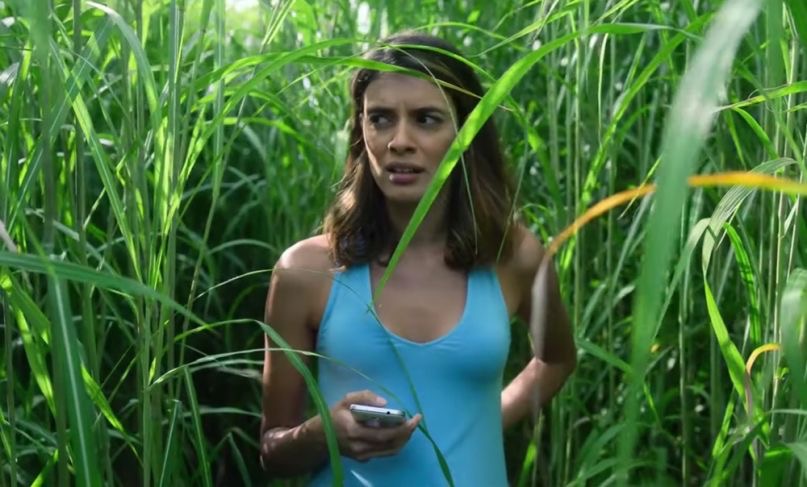 Horror stems from myriad places, but none as myriad as what Stephen King can cook up from his ever fertile imagination. While there have been killer clowns, shadows, witches, spirits from generations ago, mirrors and crazed husbands and fathers that have been the stuff of nightmares from King’s stories, this time, Netflix’s latest adapts one of King’s more recent offerings of a novella about the horrors of-you guessed it-tall grass. Just the ingenuity of the premise and the intrigue surrounding it should be enough to lure you in, as it was for me. However, while it surely builds into something, it may not be enough to make you stay with all the fervour that you stepped in with.

A recent Stephen King adaptation to be in the limelight was the second chapter to the smash hit teen horror flick, ‘It Chapter Two’, and one of the major praises for that film, or both films, was that it was almost completely faithful to the source material, sans the ending, and a few tweaks here and there. The problem with adapting a short story, that too of as revered a writer as King, is that well, it’s a short story.

While the length of the two-part Esquire piece that King co-authored along with his son Joe Hill is sizeable enough, it also leaves enough room for writer director Vincenzo Natali to play around and add to the world King and Hill have created- and he does. Like any experiment, some of it sticks while some of it doesn’t. The result is a highly uneven film that starts off with genuine promise but quickly loses steam as it approaches the middle and end segments.

‘In The Tall Grass’ starts off with sibling pair Cal and Becky driving off to San Diego to presumably give up Becky’s baby, due in three months, up for adoption. While the two stop to tend to Becky’s bout of morning sickness, they hear a child, Tobin, calling for help from within the seemingly endless field of tall grass. The two decide to go inside and quickly get separated, until not much later realising that there was something wrong with the place and that the field, or the grass, was manipulating them into traveling endlessly without reaching each other. Along with Tobin’s parents and later, Beckie’s boyfriend Patrick caught in the tall grass too, the five work out ways to get out of the field, all the while discovering terrifying secrets related to the field, and how things aren’t at all as they seem.

To the film’s and the director’s credit, ‘In The Tall Grass’ does a fine job at setting up the scenario, even if characters take a back seat and are reduced to a little more than mere templates in the process. There are glimpses of craftiness at display as fears are mined through the almost constant setting of the tall greens, inducing a constant sense of dread and discomfort through claustrophobically and endlessly moving within the field, also a fine way to make the best use of a tight budget.

The reveals referencing how time and space worked differently within the fields and the looming mystery of the force behind this could be more to the gut, but still succeed in landing the desired impact: just enough to keep you going. It is in the second half, once the setting up is complete and it is time to cash in some payback, that the narrative slips, and never recovers. The events and the final reveal make little sense, and what’s even more unfortunate is that I, as an audience, cared very little. The standard performances don’t help either, even from Patrick Wilson who is somewhat of a horror connoisseur by now, helming two wildly successful horror franchises in the last few years alone.

In the end, I would have termed ‘In The Tall Grass’ pretty standard Netflix fare had we been in 2016. However, it is 2019, and we have Netflix in the running as a major contender for some potential Oscar candidates. The film does justice to neither the platform’s new found credibility, nor to the incredible legacy of Stephen King. It’s the beginning of Fall and Halloween month, and we are going to have horror movies dropping in by the numbers every week. Watch it, if you may, for the intriguing premise.