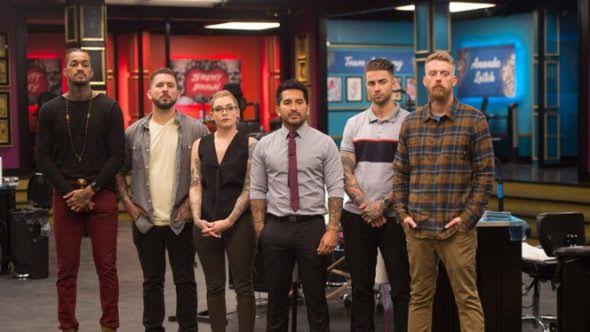 In this week’s episode of ‘Ink Masters: Turf War’, which also happens to be the show’s 13th season, we follow the contestants as they are faced with a bunch of the weirdest challenges.

While the Skill of the Week is Ledgability, the Flash Challenge requires the teams to create a tattoo on an 8 foot by 12-foot canvas while using only strands yarn and nails. In the elimination round, the artists are required to design a schematic tattoo. We will get to the detailed description in our recap section.

Now, are you done with episode 4 yet? If yes, you must be anticipating what to expect from the next episode. Well, read on to know the airing, streaming, and synopsis details of Ink Master Season 13 Episode 5.

Ink Master Season 13 Episode 5 Release Date: When Will It Premiere?

The fifth episode is called ‘Out of Your Element’. Its official description goes as follows: “Just as the teams think they’ve figured out the turf war, a twist sets the competition ablaze and burns it down to its very core.”

Cable subscribers can easily catch the latest episodes as they air on Paramount at 10 PM ET/PT every Tuesday. You can also log into Paramount’s official website and watch the released episodes online.

You can live-stream the series on your digital devices, such as a computer, phone, Roku, Fire TV, Apple TV or another streaming device on Sling TV, YouTube TV, Directv, Philo TV, and Fubo TV. Complete seasons and episodes are additionally available for purchase on Amazon Prime Video.

Episode 4 of Season 13 of ‘Ink Master’ is titled ‘Battle Lines’. In the Flash Challenge, the West team is declared as the winner — so all the members are safe – for now. In the elimination round, three artists land at the bottom place – Raul Ugarte, Arlene Salinas, and Jordan Allred. But the one who runs into trouble is Arlene.

What happens is, she is tasked with creating a schematic tattoo of a knife, which looks simple at first glance. But her main issue is the skin canvas, who wants the design to be carved in a specific way. Moreover, since the skin is old, wrinkled, and packed with moles, Arlene faces many challenges — causing uneven lines in her tattoo.

Since the pattern is simple, the mistakes become more prominent. And this is the reason, she is finally sent back home.

The Best Tattoo of the Day is given to Jerrel Larkins while Bob Jones’s cool design is packed with flaws. But since Bob’s motif is so unique, he manages to stay back. On the other hand, Jerrel Larkins manages to beat even returning artists Frank Ready and Jason Elliott, who also manage to showcase some of the best designs from the season.