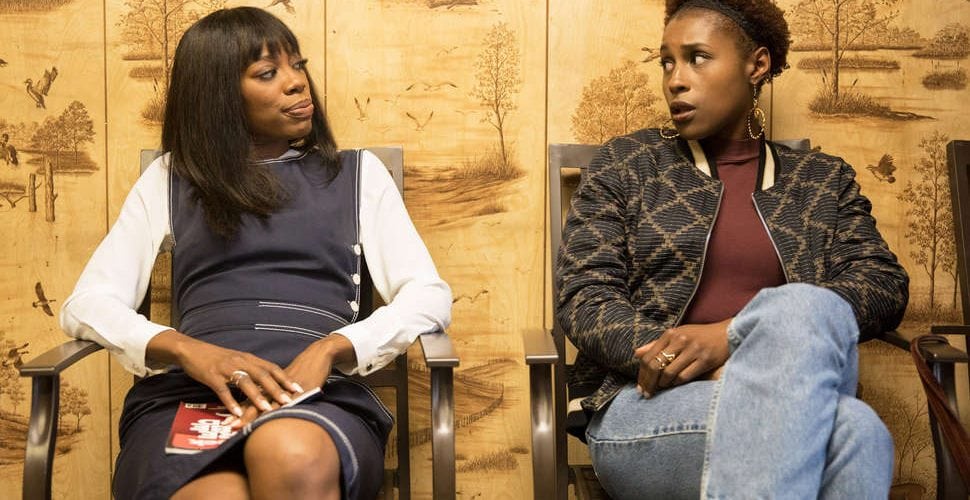 ‘Insecure’ is a comedy-drama series partially based on Issa Rae’s acclaimed web series ‘Awkward Black Girl’. It has been created by Issa Rae herself, and Larry Wilmore. The show first aired online via HBO Go and HBO Now before it started airing weekly on HBO. It premiered online on September 23, 2016, and on television on October 9, 2016.

The show explores black female experience from the perspective of the two protagonists. The content and portrayals have been praised unanimously by fans and critics alike, who have said, ” ‘Insecure’ uses star Issa Rae’s breakout web series ‘Awkward Black Girl’ as the basis for an insightful, raunchy, and hilarious journey through the life of a twentysomething black woman that cuts through stereotypes with sharp wit and an effusive spirit.”

The idea of the show first came to Rae in 2013, and it was planned as a look at the awkward experiences of a present-day African American woman. The show attempts not only to examine the complexities of being black but also tries to address the issue that one cannot escape one’s skin color and all the racial connotations that it carries. She commented, “We’re just trying to convey that people of color are relatable. This is not a hood story. This is about regular people living life”. However, if you are looking for the hood experience, you can check out ‘The Wire‘ which is also an HBO show.

Insecure Cast: Who is in it?

The cast of ‘Insecure’ is Issa Rae who appears as Issa Dee. Other main cast members of the show include Yvonne Orji as Molly Carter, Jay Ellis as Lawrence Walker, Lisa Joyce as Frieda, Natasha Rothwell as Kelli, Amanda Seales as Tiffany DuBois and Y’lan Noel as Daniel King.

There are several recurring cast members. One of the most notable ones is Neil Brown Jr. of ‘The Walking Dead‘ fame, who appears in the role of Chad Kerr. In the upcoming season, most of the main characters are expected to return. Rae will definitely reprise her role, as will Orji, Rothwell, and Seales, as her best friends Molly, Kelli and Tiffany. Dee’s colleague Freida too should be back, but unfortunately, Ellis might not return as longtime boyfriend Lawrence. However, we would not rule out a cameo, and we also expect to see some new faces to keep things interesting.

Read More in TV Preview: The Match Game | To Tell the Truth

Insecure Plot: What is it about?

‘Insecure’ tries to shed light on the awkward experiences of a contemporary African-American woman. Thus, when we are introduced to the story, it is through the perspectives of two black female protagonists. Issa and Molly are shown to be best friends and have remained so since they went to college at Stanford. Both the women are in their late 20s and the show carefully explores both their careers and personal lives.

When we are first introduced to Issa, we see that she is in a long-term relationship with Lawrence. However, as the show progresses, she does break up with her boyfriend. In terms of her professional career, she works at a non-profit which seeks to help middle school children of color. Molly, on the other hand, is a highly successful corporate attorney. While having made her mark in the professional field, her relationships are nowhere as successful as her career, and she faces difficulties while dating men. Each episode cautiously but humorously explores the racial and social issues that can be related to the contemporary experience of being a black woman.

The series is marked by Rae’s unique writing, which is crisp and original while still managing to be funny.  The Guardian praised the show, saying, “The voice might seem so fresh because there are so few shows centered on black females, especially ones that are not made in the Shonda Rhimes mold. However, I think that not only politicizes a show that isn’t looking to be political but also belittles what Rae is accomplishing. Yes, there are moments that are very insightful about race or specific to the black experience…but they are ancillary to the characters’ universal experience as people.”

Insecure Season 4 Release Date: When is it coming?

‘Insecure’ Season 3 premiered on HBO on August 12, 2018. On September 6, 2018, itself, the show was renewed for another season. While this meant that Season 4 was expected to drop by the latter half of 2019, it was reported that the show has been pushed to 2020, due to other prior commitments that Rae has. Considering everything, our best guess is that Insecure season 4 could release sometime in Q1, 2020. We will update this section as soon as we learn more.

While we wait for an update on Insecure season 4 release date, check out the season 3 trailer to refresh your memories. If you haven’t seen the show yet head over to HBO to catch all the episodes of the previous seasons.

What’s the Latest Update on Most Expensivest S04?

When Does Vice S07 Come Out?