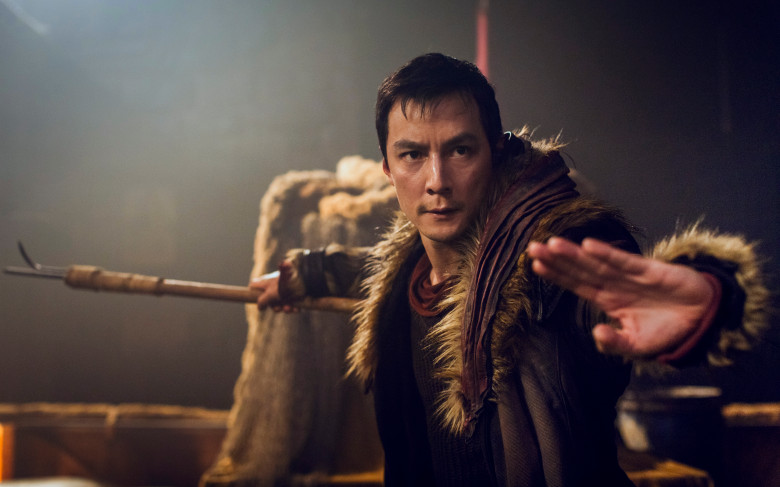 ‘Into the Badlands’ is an American television series that is full of drama, action, and adventure. The show airs on AMC and first premiered on November 15, 2015.  The show focuses on a young boy who takes it upon himself to go through a dangerous land in order to seek enlightenment.

Tim Goodman from The Hollywood Reporter gave a positive review on the show, commenting, “AMC finds a bloody, fun and entertaining non-zombie counterpart to The Walking Dead and turns Sundays into an escapist red zone.” Variety similarly commended the show saying:'”Into the Badlands’ is an homage to classic Samurai films and kinetic action fare churned out by Hong Kong maestros of furious fists, and if the TV drama had failed to meet the standards set by the sturdiest examples of those genres, it would have seemed superfluous at best. Fortunately, star Daniel Wu is more than up to the task of occupying the center of this streamlined story of vengeance, tyranny and roundhouse kicks”. However, it appears as though the positively reviewed show might have run its course on AMC.

Into the Badlands Cast: Who is in it?

Daniel Wu, who is known to have worked in over 60 movies and is known as a “flexible and distinctive” actor in the Chinese movie industry, is seen playing the role of Sunny, one of the deadliest clippers in the badlands. Marton Csokas who was seen in the ‘Lord of the Rings’, plays the role of Quinn, the preeminent baron of the badlands and a former Clipper. Orla Brady of ‘Banished’ (2014) plays the role of Lydia, who is Quinn’s first wife.

Into the Badlands Plot: What is it about?

The opening introduction of the show sets the tone for what is to come. It is narrated thus, “The wars were so long ago nobody even remembers. Darkness and fear ruled until the time of the barons, seven men, and women who forged order out of chaos. People flocked to them for protection. That protection became servitude. They banished guns and trained armies of lethal fighters they called Clippers. This world is built on blood. Nobody is innocent here. Welcome to the Badlands.”. One immediately gets in gear for a lot of action in a place where no one is to be trusted.

The series is set 500 years after a war that destroyed all civilization and left the world in shreds. Even though many elements of the old society, like electricity and ground vehicles, are left, the world now shuns any weaponry like guns and relies on cross-bows and close combat weapons. In the former state of Oklahoma which is now known as Badlands, Baron Control has taken over. Little is known to people beyond the badlands, but there are rumors about a city named Azra existing outside Badlands. A teenage boy takes it upon himself to search for this city.

What stands out in the show, almost immediately, is the social structure that has been turned askew. Fighting for survival, humankind seems to have done away with the niceties of civilization and gone towards a more dictatorial form of rule that is represented by the barons. If the rule is oppressive, those outside the rule are even worse, since they have descended to savagery. Like the introduction warns us, there is no place or time for respite in the badlands. Packed to the brim with plenty of action, and lessons learned, this is a show that keeps on giving. If you have not watched the series, try and imagine something like ‘Mad Max‘ with martial arts.

Into the Badlands Season 4 Release Date: When will it premiere?

‘Into the Badlands’ Season 3 premiered on April 22, 2018. On February 9, 2019, AMC canceled the show but did not provide a reason for the same. Soon after, Daniel Wu took to Instagram to send out a heartfelt message to fans, saying, “Good news always comes with bad news…After these 8 episodes air that will be the end of the show. The bad is obviously a lot worse than the good, especially for all of you who have supported with so much passion over the past three seasons. Thank you for your support. We always had you in mind while making this as we wanted to give you the best martial arts action show to ever appear on tv and I think we achieved that. But that wouldn’t have been possible without you! So thank you! Thank you! Thank you!”

It does not seem like a Season 4 is coming anytime soon, but considering the popularity of the show, if another network does pick it up, or if AMC decides to go back on their decision, we could see Into the Badlands Season 4 can release sometime in the next two years, possibly late 2020, or 2021.

Into the Badlands Trailer:

Check out the trailer for Season 3 below to get an idea of the action packed adventure this show offers. You can find out more details about the show here.