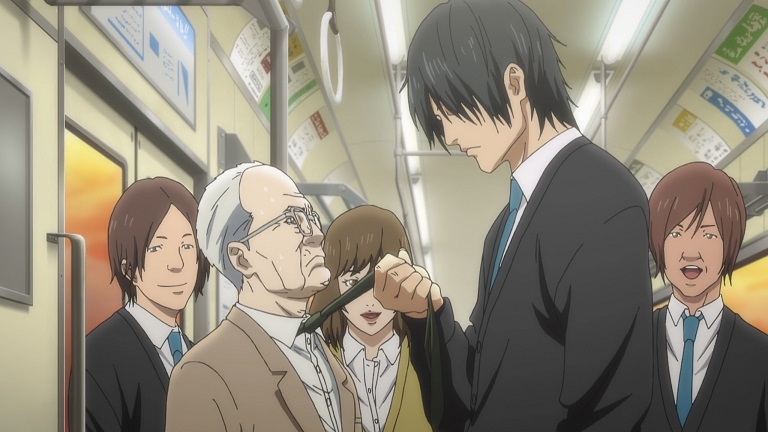 The hype around ‘Inuyashaki’ was huge even before its release as it was the second creation of manga illustrator Hiroya Oku. Over a decade ago, he had come out with a rather infamous manga called ‘Gantz’ and soon after its release, an anime adaptation of the same was made. Even the anime lived up to the same reputation and is still talked about for its graphic illustrations and bold depictions of the evils in the world.

So for obvious reason, ‘Inuyashaki’ was one anime that caught the attention of all action sci-fi lovers. And yet again, the creator successfully uses an intriguing form of storytelling telling that captivates you from the beginning itself. It reflects on the life of two different individuals who are both gifted with the same abilities and still use their powers in a very different way. They say “with great power comes great responsibility” and ‘Inuyashaki’ very well depicts this by showing how a teenager misuses his “great power” in contrast to an old man who realizes the “great responsibility” bestowed on him.

Overall, ‘Inuyashaki’ not only gives you a typical “good vs evil” sci-fi story, but at the same time, it also explores the depths of human psychology. And even though it already popular, anime viewers will appreciate it even more in the coming years. ‘Inuyashiki’ proves that pure science fiction is still very well alive in the world of anime and is not being merely used as an undertone for harem shows. Not to mention, it has exceptionally great CGI which is something most anime shows go wrong with. What more can you ask for?

Inuyashiki Season 2 Release Date: When will it premiere?

‘Inuyashaki’ season 1 premiered on October 13, 2017 and went on till December 22, 2017. During this span, it aired a total of 11 episodes with each one being 22 minutes long. This Studio MAPPA creation has been adapted from a manga and since the release of its season one, no other OVA, side-story or “special” episodes have been created yet. It hasn’t been too long since its release but even then, the anime has been able to acquire a huge fan following has also received an above-average rating on many platforms. The mangaka of the source material is also known for illustrating ‘Gantz‘ whose anime adaptation took more of an original path. But that is not the case with ‘Inuyashaki’ as it remains loyal to its source material all the way till the end.

Pretty much everything seems to be in the favor of the anime’s season 2 but the big problem with it is the ending of both the manga and the anime. Without giving out any spoilers, let’s just say that the only way the anime can have a new season is by drifting away from the source material because of how the original story comes to an end. So as of now, season 2 seems very less likely and it’s better if we accept it that way because even if the creators somehow come out with a season 2, it will be more or less of a draggy extension of the original story. It’s really hard to speculate how MAPPA Studios could possibly renew this anime and that’s why the chances of it are very low. Even then, if we receive any news regarding ‘Inuyashaki’ season 2 release date, we will certainly update it here in this section. Till then, you can always watch the live-action adaptation of this which came out in 2018.

You can stream ‘Inuyashiki’ on Amazon Prime with its original Japanese audio and English subtitles.

‘Inuyashaki’ revolves around a 58-year-old man named Ichirou who is going through a lot of misfortunes in his life. From numerous health problems like back pain to the hatred that his wife and children have for him, he continues to suffer every single day. Despite all of these problems, he still finds some solace in his adopted Shina Inu whose name is Hanako. But his life just gets worse when one day, during a physical examination, he gets to know that he suffers from stomach cancer and he only has 3 months to live. He still somehow tries to stay strong but his family’s lack of concern towards him completely breaks him down. He takes his dog to a field nearby and starts weeping until suddenly he notices that a strange figure is standing right next to him.

Soon, the world around him is covered with dark smoke and dust and when everything clears out, he finds himself in the body of highly mechanized weapon with his skin over it. He uses his new advanced abilities to save a life and finally, after ages, he feels more alive than ever with a new sense of purpose. But though his life feels complete in the present moment, the origins of all of this are still unknown to him and he has no clue that what he considers to be a blessing could be more of curse in disguise.

WARNING: This section of the article might have potential spoilers so if you have not seen the anime yet, it would be advisable to not read this any further.

Ichirou is the main protagonist of the series who is an elderly man with brown eyes, short hair and thick grey eyebrows. He has wrinkles all over his face and even wears glasses during the first few episodes of the anime. He rarely says a word and only talks when he is forced to. This is probably the reason why his own family takes him for granted and treats him like crap all the time. He is too nice for his own good and often hides behind a curtain of cowardice and fear. He is later diagnosed with stomach cancer and this makes him reach his breaking point. A miraculous turn of events allows him to acquire superpowers and he uses these to help others out. He becomes less of a coward after getting those powers and bravely tries to live a more fulfilling life that is dedicated to the welfare of others.

It is later revealed that he was killed by a UFO landing along with another boy. The aliens had no intentions of killing anyone so they decided to give both of them a new life by rebuilding their entire bodies using old weapons and machines.

Hiro Shichigami is the main antagonist of the series who also gets killed during the UFO landing. Similar to Ichirou, his entire body is also built from scratch with weapons and heavy destructive machinery. But unlike Ichirou, he uses his newly acquired abilities to kill all the people who had previously bullied him or looked down on him. He has short navy blue hair and with dark brown eyes and is considered to be quite a good-looking man who attracts the attention of females around him. On the outside, he appears to be all calm and polite but deep inside, he holds psychopathic tendencies that come out when he acquires superhuman abilities. He uses these to murder everyone who bugs him and slaughters families just for the sake of feeling alive.

But some humanity still exists within him as from time to time, he unknowingly helps people and also shows a lot of love for his family members, especially his mother. Before being converted into a cybernetic killing machine, he was nothing by an ordinary high school student. And though other factors like bullying in school and the abandonment of his father are contributors towards his psychopathic behavior, the main reason why he kills others is that he feels less of a human in his new body.

Read More in Anime Previews: Scum’s Wish | A Lull in the Sea