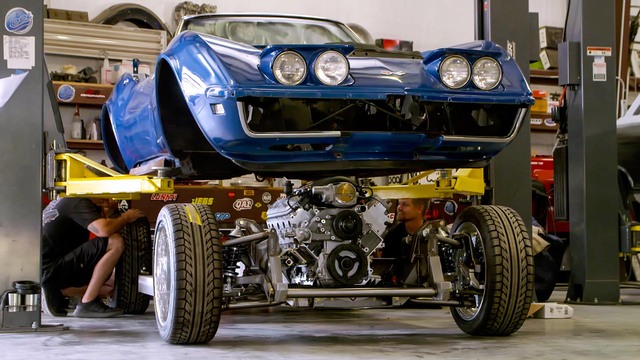 If people deserve a second chance, why not vehicles? At least that seems to be the core belief among the group members who modify vehicles in ‘Iron Resurrection‘. Be it cars, bikes, or trucks, the team is adept at changing anything, to suit their artistic vision and the clients’ wishes.

The last episode sees the team working on a Nova, which turns out to be a little more than what they bargained for. It is in tandem with what we have seen until now in Season 4, with various team members undergoing tests of ingenuity and perseverance, when it comes to modifying vehicles.

Naturally, you might be wondering about what happens in the latest episode. Not only are we here to tell you that, but we will also walk you through when and where to watch the upcoming episode.

Episode 7 is titled “Some Assembly Required Part 2”. As is obvious from the title, it is a continuation of Episode 6’s task. The team has an uphill climb ahead, as they set out to make some messy fiberglass repairs. Unfortunately, poking around reveals immense collision damage that must be fixed immediately. In the process, they end up racing against the clock to modify the 1968 Chevrolet convertible.

The client’s demands make things even harder, as they want an all-white interior. This is not exactly a good fit for the dirty job, but the crew should be able to pull through.

Titled “Some Assembly Required”, the episode sees a client bringing in the Chevrolet convertible that the team has to modify according to specifications. The man wants to surprise the missus with some updates, so the instructions are specific.

However, when the crew starts working with the fiberglass body there is a massive risk that the car might crack under pressure. Naturally, this puts the experts on edge, as they tiptoe their way around the vehicle. With nerves getting frayed as time passes, this might be one of the most nail-biting challenges we have seen on ‘Iron Resurrection’ yet.