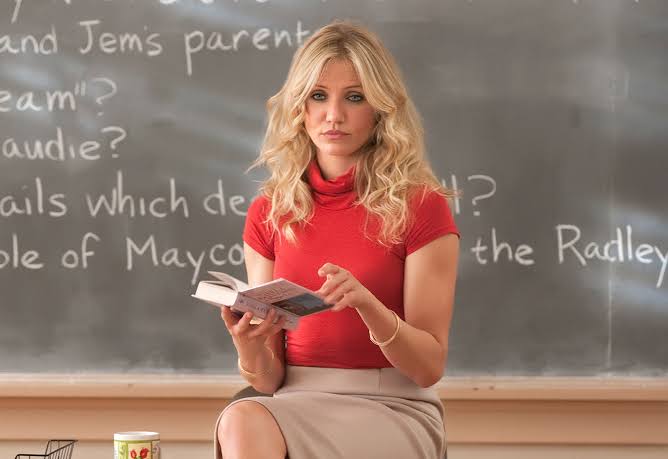 On its release, ‘Bad Teacher’ (2011) made waves as a raunchy comedy with a lovable antagonist at the helm. Directed by Jake Kasdan (of ‘Jumanji: Welcome to the Jungle’ fame), the movie released in 2011 to raving public opinion and overflowing box office collections; so much so that the movie spawned a television adaptation, albeit a short-lived one, on CBS.

Set in John Adams Middle School, ‘Bad Teacher’ narrates the escapades of pot-smoking, money-grabbing, promiscuous teacher, Elizabeth Halsey. Elizabeth is provocative, self-assured, and cuts through the noise with her no-nonsense candor. She views teaching as a means to her financial ends, nothing more, nothing less; her disdain for her profession is more than apparent in her teaching methods and techniques (or lack thereof).

Her personal and professional rival at John Adams is the buoyant Amy Squirrel, whose perennially jaunty personality is nauseating to Elizabeth. The two middle school teachers vie for the affections of loaded substitute instructor, Scott, and for the accolade that comes with achieving the highest test scores in the state. The film stars Cameron Diaz as the titular bad teacher, along with Lucy Punch, Justin Timberlake, Jason Segel, and John Michael Higgins.

Is Bad Teacher Based on a True Story?

No, ‘Bad Teacher’ is not based on a true story. The movie is based on a screenplay concocted by writers Lee Eisenberg and Gene Stupnitsky, both familiar fixtures in the world of comedy. Initially a speculative screenplay, ‘Bad Teacher’ found its way onto Kasdan’s desk, who all but pounced on it. Both Eisenberg and Stupnitsky are prominent ‘The Office’ alums, having written for season 2 through season 6 of the critically acclaimed and commercially successful mockumentary sitcom. Recently, the duo was in the limelight for writing and producing the coming-of-age flick ‘Good Boys’.

The script for ‘Bad Teacher’ was so artfully crafted and its comedic genius so above reproach that the producers and director left well alone and refrained from tinkering too much with it. The filming process was kept wholly organic, with actors occasionally experimenting with improvisation and ad-libs.  On the practically untouched script, Kasdan commented, “As a spec script, you know, it was just something they came up with and decided to write. Over its life, it has a little bit of a process, including a little bit of a process while we were shooting and stuff like that. It morphed in subtle ways but I think the final movie is actually very, very close to what they originally came up with.”

The actors took cues from popular culture to develop their character personas. Punch, who portrays Amy, tapped into Sarah Palin’s upbeat public image, which she considered closest to Amy’s persona. Palin served as the Governor of Alaska and was the Republican nominee for Vice President of the United States in 2008. Punch explained, “[Palin] is incredibly perky and energetic and sort of this type A seeming character. There was just something about this sort of tween way of speaking, you know, ‘Holy Guacamole!’ and ‘Shut the front door!’ and all those sorts of expressions.”

On the other hand, Diaz went closer to home: she took a leaf out of a former teacher’s book. Diaz revealed that she drew inspiration from a teacher of hers who tried and failed to be a model educator, despite having honorable intentions. Diaz also reiterated that she approached the role from the viewpoint that teaching may not be everyone’s calling, which formed the basis for ‘Bad Teacher.’ In the movie, her character, Elizabeth, eventually transitions into the role of a guidance counselor.