Is Dolly Parton’s Coat of Many Colors a True Story?

‘Dolly Parton’s Coat of Many Colors’ is a made-for-television drama film, which premiered on NBC on December 10, 2015. Written by Pamela K. Long, the film derives its name from the eponymous song written and sung by country music legend, Dolly Parton. The film centers upon a gifted little nine-year-old Dolly (Alyvia Alyn Lind). Taking viewers on a journey to Dolly Parton’s past, this film showcases her childhood, growing up in Tennessee’s Great Smoky Mountains.

The film gives us not only glimpses of her childhood but also her upbringing in a family of twelve children. It details out the struggles of her family and how she managed to follow her passion for music through her parents’ never-ending support. We got intrigued by witnessing Dolly Parton’s life on screen and thus decided to check whether the film is based on a true story or not. Well, here’s what we found out!

Is Dolly Parton’s Coat of Many Colors Based on a True Story?

Yes, ‘Dolly Parton’s Coat of Many Colors’ is based on a true story. The film has been produced by Dolly Parton herself. The eponymous song, released in 1971, tells the story of how Dolly’s mother stitched her a coat of many colors from pieces of rags. Despite being bullied about the patchworked coat, it is a symbol of faith and love and draws obvious parallels with the biblical story of Joseph’s coat of many colors. “One is only poor, only if they choose to be” is the moral of the song and, as it turns out, it is the story that inspired this film.

The writers decided to recreate this piece of history into a film whose cast was approved by Dolly herself. The role of Dolly’s father and mother was enacted by Ricky Schroder and fellow country singer, Jennifer Nettles. The film was shot in locations like Covington and Conyers, Georgia, and Pigeon Forge, Tennessee, which also happens to be the location of Dollywood, an amusement park owned by Dolly Parton.

Dolly Parton and Her Family

‘Dolly Parton’s Coat of Many Colors’ accurately depicts her family. The story grounds itself in the family’s strong interpersonal relations that withstood the test of time and countless hardships. Dolly’s childhood was spent in poverty and many other constraints that shook their faith and belief system. Her father, Robert Lee Parton Sr., worked through many hardships like dealing with drought at his Tobacco plantation and the loss of his unborn child.

Dolly’s mother, Avie Lee Parton, was the loving matriarch of the family who tried to keep the close-knit family together in a one-room cabin in Locust Ridge, East Tennessee. The film is inspired by these real events and showcases a true story of the childhood struggles of Dolly Parton. The legendary singer and her family persevered through mental trauma and financial difficulties. 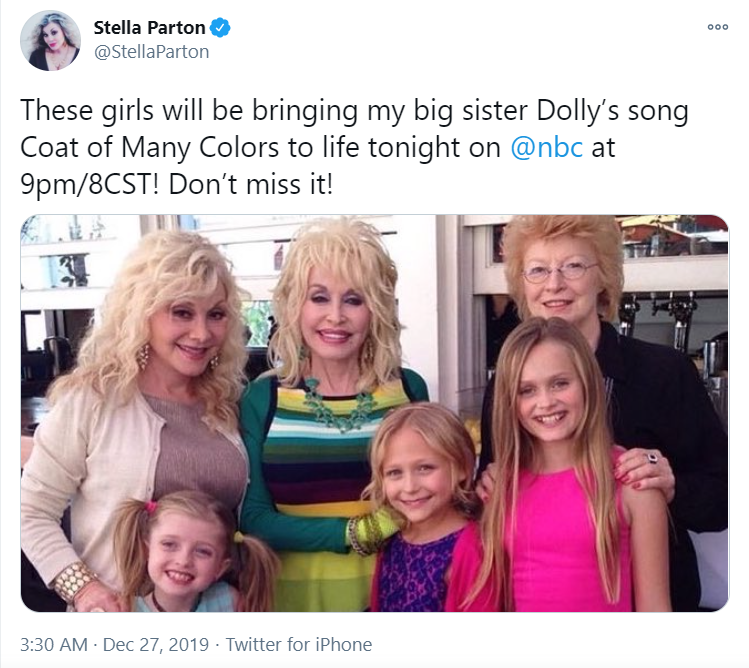 The coat that is stitched together from different rags is symbolic of their faith that held them together. Speaking on her faith and religious beliefs in an interview with Parade, Dolly said, “As I get older, I’m even stronger in my faith. That’s one of the reasons I wanted to do this movie, because it goes back to family values and faith, to our depending on each other and on things that are bigger and better than us.”

Dolly Parton is also the film’s narrator, and we can even see her sister, Stella Parton, play the role of Corla Bass in the film. The film spawned a sequel titled ‘Dolly Parton’s Christmas of Many Colors: Circle of Love’ that released on November 30, 2016, on NBC. Needless to say, this sequel also borrows its narrative from real-life experiences of Dolly Parton.