‘Holidate’ is a romantic comedy that centers upon Sloane and Jackson, who agree to be each other’s platonic dates for a year just so that they can escape the tumultuous pressure of being single, especially during festivities. But fate has its own plans, and this arrangement may just end up turning into the real thing. Starring Emma Roberts, Luke Bracey, Jake Manley, Jessica Capshaw, Andrew Bachelor, Frances Fisher, Manish Dayal, and Kristin Chenoweth, it’s certainly a fun watch. But is ‘Holidate’ based on real events? Let’s find out!

Is Holidate Based on a True Story?

No, ‘Holidate’ is not based on a true story. In conversation with Business Insider, Luke Bracey, who plays the male protagonist, Jackson, stated, “Emma and John and I, the director, we kind of looked towards ‘When Harry Met Sally… That’s a great feat, you know?” Talking about the bond between the characters, he explained, “They’re just friends in that one for a lot of it. We wanted to capture that kind of idea of friendship becoming something.” 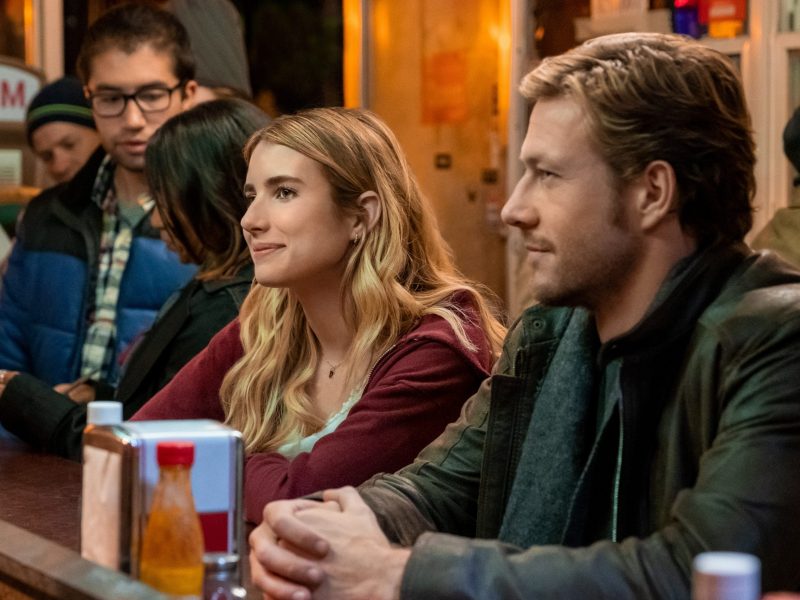 Moreover, the plot does encompass themes like the pressures of dating in the modern age, making the narrative feel all too familiar. Sloane is single and has a job. But the only thing her mother, Elaine, can focus on is that Sloane, unlike her sister, Abby, does not have a partner. Moreover, Emma Roberts’ character suffers from a broken heart as her ex, Luc, cheated on her with a barista. Due to this, Sloane has commitment issues, but when she runs into the pro-golfer, Jackson, while returning gifts at the mall, her life changes.

After all, the two agree to be each other’s “holidates.” This is essentially a platonic arrangement for the festive season wherein the usual pressures and expectations of dating are dissolved. You now have a date for many occasions and functions without the conventional drama. As the two spend more time together, they start developing feelings for each other. But Sloane has a hard time coming to terms with her emotions, until (of course) the finale.

Bracey stated that his character’s honesty really enchanted him. The actor continued, “There’s also been times where, you know, I’ve kind of felt out of place and felt very isolated in wherever I’ve been, but then that kind of idea of like, just put yourself out there and be open to things and say yes and go forward and meet new people that offer you something different that you don’t know.” The theme of exploring the previously unknown is present within the movie, albeit in a very subtle manner.

Think about it: Sloane is quite comfortable being single. Sure, she hasn’t recovered from the devastating blow that Luc dealt her, but even then, she’s reached this point in her life where she’s not actively chasing another relationship. So she doesn’t really have the motive to enter such an arrangement with Jackson in the first place. But Elaine keeps harping on about a potential boyfriend for Sloane and even sets her up with the neighbor, Farooq, who is a doctor. On paper, he makes for the ideal partner – he is strong, smart, successful, and kind-hearted. He is good with kids, too.

However, Sloane willingly chooses to platonically be with Jackson because she can connect with him a lot better. Plus, you have to admit that the first conversation between the protagonists would have led nowhere if it weren’t for the incessant pressure that Sloane faced from her mother. In the end, it is Elaine who pushed the girl out of her comfort zone and onto a path that eventually gets her love. This is not a trail that the sweatpants wearing protagonist would have ever explored herself.

We certainly don’t see Sloane dressing up for first dates to talk to people she has absolutely no interest in. However, she is comfortable with Jackson and can open up to him, even though they don’t really know each other. There is no pretentiousness and apathy between them. Evidently, it is this path less taken that really drives the romance in the film, and with a collection of familiar story arcs, one can feel as though ‘Holidate’ is inspired by real events, even when it’s not.

Read More: Where Was Holidate Filmed?