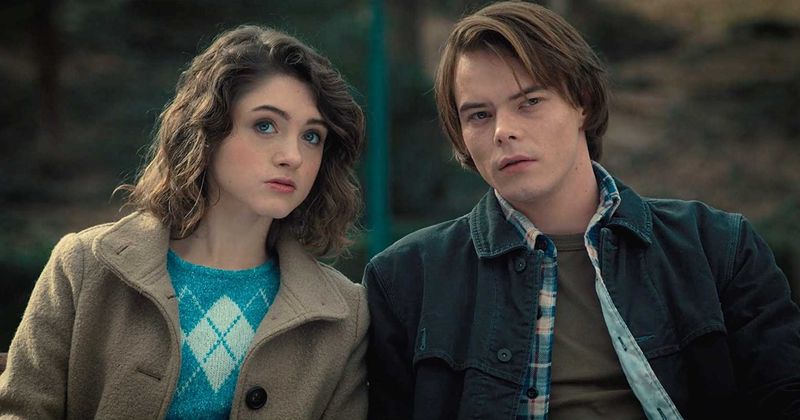 Natalia Dyer is an award-winning star who rose to fame after her impeccable portrayal of an audacious teenager on ‘Stranger Things.’ The American actress realized her passion at an early age and graduated from the performing arts high school Nashville School of the Arts to fulfill her lifelong dream. In 2009, she got the opportunity to play Clarissa Granger in ‘Hannah Montana: The Movie’ and her inaugural screen role put her on the map. But her most prominent role so far has been on Netflix’s science-fiction horror series. Not only has it fetched her immense critical acclaim but also crossed her paths with her now-boyfriend, Charlie Heaton. Here is everything you need to know about their adorable love story!

Who is Natalia Dyer Dating?

The ‘Stranger Things’ star has been in a committed relationship with her co-star, Charlie Heaton, for over four years. The two met on the set of the Golden-Globe nominated show on which they have appeared as the famous Nancy Wheeler and Jonathan Byers. The fans adored their onscreen chemistry and began to ship them together since the series’ premiere on July 15, 2016. Natalia successfully kept her beau under the wraps for a while but now that the cat is out of the bag, they have dived into a full PDA mode. Here is a brief timeline of their years-long companionship!

Their followers first saw Heaton declaring Natalia as his “amigos” on his Instagram. The lovebirds have been inactive on their social media accounts for the most part but have shared adorable pictures of one another from time to time. They have cutely dressed up in quirky Halloween costumes and attended all the major red carpet events hand in hand. A source close to them revealed that they spent every waking minute in each other’s company before the season two filming kick-started in October 2016.

Heaton was the first one out of the two to cave in and officially accept his romantic feelings for Dyer in February 2019. His beau followed closely and confessed to Refinery29 in July of the same year that, “It’s an interesting thing to work with somebody who you go home with.” Since then, Natalia and her boyfriend have been spotted kissing in London and roaming around the streets of Paris. While the couple does not have a baby of their own, Heaton has fathered a secret love child, Archie, with his ex-girlfriend, Akiko Matsuura.