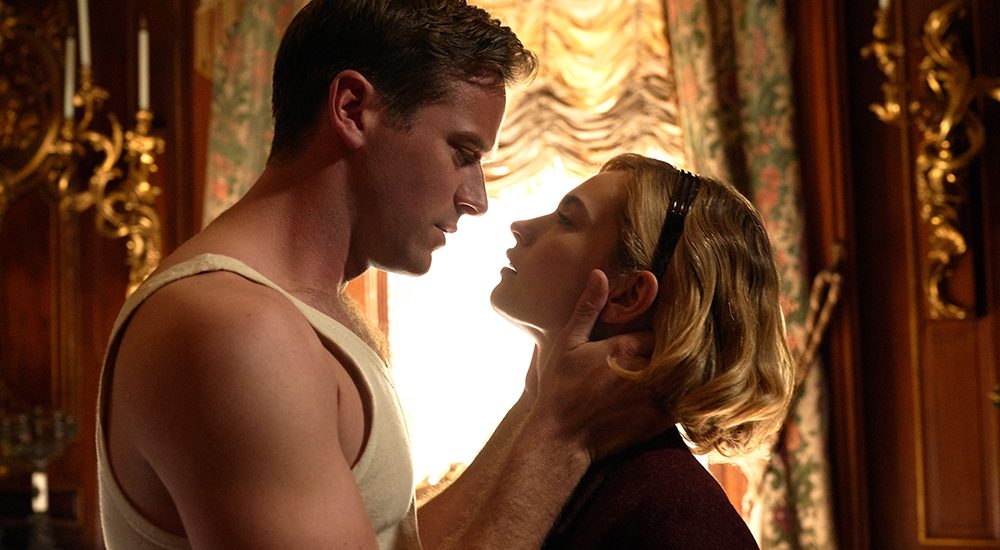 Directed by Ben Wheatley (‘Free Fire’), the Netflix film ‘Rebecca’ tells the story of love, envy, rivalry, and hatred. The unnamed protagonist (Lily James) is a British paid companion to an older American socialite currently residing in a hotel in Monte Carlo. There, she meets Maxim “Max” de Winter (Armie Hammer). A passionate and whirlwind romance ensues. Right when it seems like they are about to part ways permanently, Max asks her to marry him. In the next few weeks, they get married and go on a honeymoon before he takes her to Manderley, the sprawling family property in Cornwall.

As she settles in her home, the protagonist discovers that she can’t escape the enormous shadow that Max’s first wife Rebecca casts several years after her death. The protagonist is repeatedly told that the first Mrs. de Winter was a woman of great beauty, remarkable intelligence, and incredible humanity.
Mrs. Danvers (Kristin Scott Thomas), who runs the household and originally came to Manderley with Rebecca, is downright hostile to her. Tricked by Mrs. Danvers, she makes an appearance at the annual costume ball wearing a dress that once belonged to Rebecca. When she sees the horror and disgust in Max’s eyes, she realizes that she has made a mistake.

It isn’t love that had made Max unwilling to talk about Rebecca. On the contrary, he hated her. She cheated on him with multiple people and flaunted her affairs before him, knowing that he would never divorce her. She even told him that she was pregnant with another man’s child and was going to raise it as if it were Max’s, and he couldn’t do anything about it. Enraged, Max killed her. However, instead of focusing on the fact that her husband just confessed to killing his pregnant former wife, she is relieved. If the historic setting and complex characters of ‘Rebecca’ have made you wonder whether it is based on real-life events, this is the article for you.

Is Rebecca Based on a True Story?

No, ‘Rebecca’ is not based on a true story. The film is the 2020 Netflix adaptation of the 1938 novel of the same name by Dame Daphne du Maurier. Widely regarded as one of the greatest novels of all time, ‘Rebecca’ is a perfect composition of multiple genres, from gothic horror to psychological thriller, to romance drama. According to du Maurier’s own description, the plot of the book is “a sinister tale about a woman who marries a widower… Psychological and rather macabre.”

Jane Goldman, Joe Shrapnel, Anna Waterhouse wrote the screenplay based on du Maurier’s novel. ‘Rebecca’ has been adapted for the screen multiple times before, most notably by Alfred Hitchcock in 1940. Starring Joan Fontaine as the second Mrs. de Winter, Laurence Olivier as Maxim, and Judith Anderson as Mrs. Danvers, the movie won the Best Picture Oscar that year.

The most significant theme in both ‘Rebecca,’ the Netflix film, and its source material is jealousy. Du Maurier’s relationship with her husband, Lieutenant-General Sir Frederick “Boy” Browning, provided some inspiration in this regard. Before marrying Daphne, Browning was engaged to Jan Ricardo, a woman of considerable beauty. She was troubled by the idea that despite marrying her, Browning still had feelings for Ricardo.

Manderley was inspired by two estates, Milton Hall in Cambridgeshire (at the time in Northamptonshire) and Menabilly in Cornwall. As a child, she was a frequent visitor to Milton Hall, and the historic mansion left a deep impression on her. She leased Menabilly for about two decades and used a significant portion of her wealth in renovating it. As with Manderley, Menabilly cannot be spotted from the shore because of the woods.

Read More: Where Was Rebecca Filmed?