Is ‘Steve Jobs’ Heading on a Path Similar to ‘Raging Bull’ ? 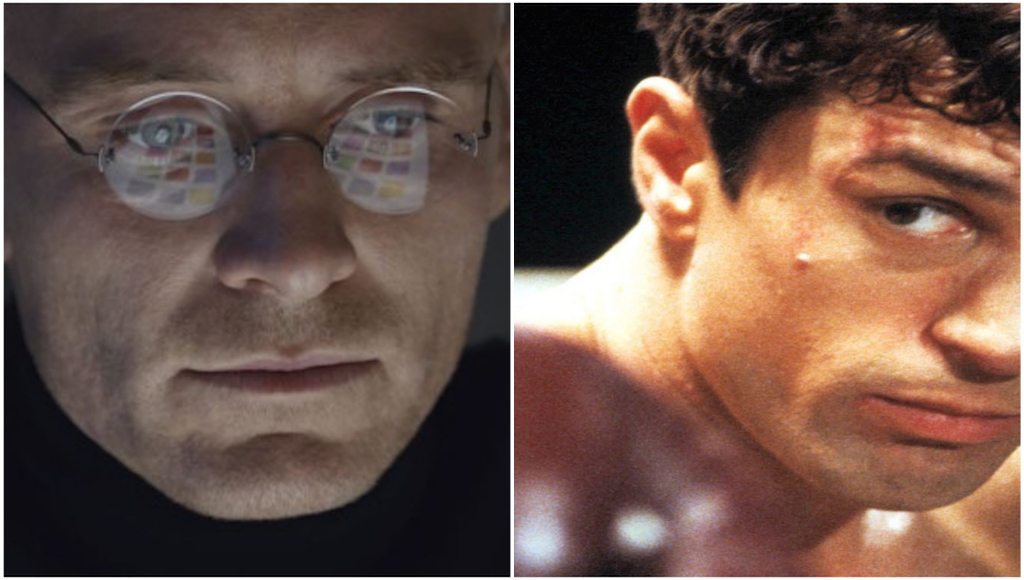 Watching Raging Bull (1980) for the first time as a first year acting student, one thing became very clear while watching the film and that was that I could never accomplish what De Niro did in that superb film. But God, how I wanted to tell people about it he next day and the many weeks after. The raw, searing power De Niro brought to the character was stunning to behold, and while critics raved about the film and the performance, audiences stayed away from the film. Scorsese to audiences: right ring with the fighters, bringing us closer to a fight than we had ever been before, hearing he punches, seeing the spray of blood, hearing the crowd become distorted as the savage blows impact the sense, and the blood, so much blood. This was hardly a date film, or a film to be enjoyed. Movies like this are unsettling masterpieces, we all know they are brilliant, but that does not mean they are meant to be enjoyed. Films like Ranging Bull (1980), Blue Velvet (1986), Bird (1988), up to The Passion of the Christ (2004) are brilliant piece of cinema, but they are demanding on the audiences because the subject matter might be too tough, or the character simply not likable.

Could this be what plagued Steve Jobs, the brilliant film from Danny Boyle?

From the moment it was released, the critics raved about the picture, that amazing Michael Fassbender performance, the screenplay, the supporting work of Kate Winslet, Jeff Daniels and Seth Rogen yet the film sunk like a heavy stone with audiences. They just did not go. TV ads screamed the reviews, the paper ads were impressive, but no matter how they rhapsodized about the film, it was not making money. Within a few weeks of its release, its failure at the box office had it all but taken out of the Oscar race.

And then the Los Angeles Film Critics Association awarded Fassbender their Best Actor prize, and just like that the film was back in the race. The Screen Actors Guild came next, with nods for Fassbender and the ensemble, then Golden Globes, so yes, though a longshot, Steve Jobs is very much a candidate at the Oscars.

Raging Bull (1980) was released before the internet, before there were countless bloggers predicting and supporting various films and performances (and lets not pretend it does not matter), so in a way reading positive reviews by the major US and Canadian critics would benefit the movie, or should have. There were many who believed the film to be a work of art, but just as many stated they had no desire to see the film again. Even more reminded audiences it was not a date movie…true enough.

De Niro swept the Best Actor prizes from the major critics groups including both the LA and NY Film Critics, as well as the Golden Globes for drama. The film was nominated for eight Academy Awards including Best Picture, Actor, Director (Scorsese), Supporting Actor (Joe Pesci) and Actress (Cathy Moriarty), Screenplay and Film Editing among others. It would win just two, De Niro for Best Actor and Best Film Editing. It would win just two, for Best Actor and Bes Film Editing. According to the Academy the best film of the year was Ordinary People with is director Robert Redford taking Best Director. By the end of the decade it was a consensus that Raging Bull was the best film of the decade….period, and today Ordinary People is almost forgotten.

It was widely believed that Raging Bull did not find acceptance in audiences because, he was abusive, vulgar, violent, he was repellant, and due to the the powerful subject matter. There were times in the film when La Motta (De Niro) was simply loathsome and deserved everything he got, people failing to see the human being struggling to be decent throughout. The opening frames of the film show La Motta shadow boxing in the ring, a metaphor for what we are about to see, a man at war with himself, his greatest opponent being himself. He beats his wives, he cheats on his wives, beats his brother who is also his manager, and is governed by a ferocious temper and intense jealousy. HIs wife once remarks about another boxers good looks, and La Motta destroys the young mans face in the ring, putting his nose to the other side of his face…over a comment. When he retires, after his second wife has left him he opens a nightclub becomes and up comic, eventually busted for serving alcohol to minors and perhaps trading that for sex favors (never proven). He was by all counts a terrible human being, and that above all else was why the film failed at the box office. There is no denying the artistry with which it was made, it is a masterpiece, but in thirty years as a critic, I have seen the film just three times.

Steve Jobs suffers the same fate. Though not a violent man, Jobs was an acerbic, difficult, arrogant man with no regard for how others felt. He is by all accounts an unpleasant man to be around, to know, to work for and with, when his long time friend, portrayed so nicely by Seth Rogen moves further and further away from him.

The film is superbly made by Oscar winner Danny Boyle, acted with perfection by Michael Fassbender as Jobs, but again playing a man who was so cold, so remote he was not a great human being. He would alter the course of communication in the world while he was living, and changed the world in so many different ways, was a billionaire yet let the mother of his child live on social assistant for a time.

Those reasons, the character of Jobs are why the film has faltered at the box office. Audiences can handle a villain such as Hannibal Lector in The Silence of he Lambs (1991), but not terrible people who have everything, whose behavior is tolerated by those around them because of what the person is.

So yes Steve Jobs, like Raging Bull is a brilliant film…but I do not expect any love from the Academy. Nominations? Maybe…not that many, but a few, Fassbender most likely. I suspect years from now audiences and critics will look back and recognize the film as a masterpiece….just not right now.