Are Jason and Jonathan From Say I Do Still Together? 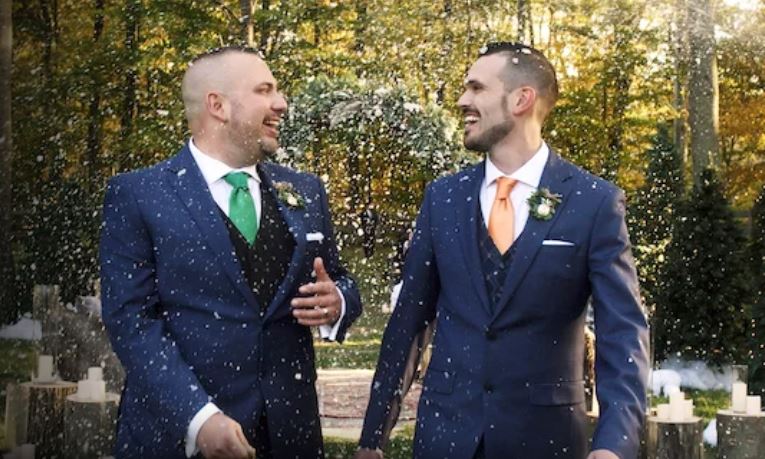 Netflix’s ‘Say I Do’ is a series wherein each episode features a different couple who has a wedding planned for them in just one week. This is done by three industry experts who most of the time do not have a lot to work with because one half of the couple is surprising the other with their dream wedding. In Episode 6, ‘In Sickness and In Health,’ the case is similar because Jason is the one surprising his long-term fiance, Jonathan.

Jason and Jonathan: Say I Do Journey

Jason and Jonathan got together almost 8 years ago after Jason messaged that latter on an online dating app. They did get engaged in 2015, a few months after same-sex marriages were legalized, however, fate made it difficult for them to get married. Jason got diagnosed with stage 4 Hodgkin’s lymphoma and the cancer had even spread to his bones, making it difficult for him to function. Jonathan stood by his side, though, and even though he himself was scared, he took over the role of being the primary caretaker.

Jason has since been fortunate enough to make a full recovery, but his treatment depleted the couple’s finances and pushed their plans to get married yet again. Nevertheless, the couple knew what they wanted and stuck by each other. Jason knew exactly how hard the last few years had been on Jonathan, but he also knew that the only way he could properly thank the love of his life for all that he did, was by surprising him with a Christmas themed dream wedding and making their relationship legal.

After Jason proposed again, this time in an empty football field, he told Jonathan that the “1-year cancer-free party” was actually their wedding. Jonathan was a nervous wreck because of how fast it was all happening, but it was for all the right reasons. He just couldn’t wait to finally start the rest of his life with Jason. And so, in a beautiful Christmas-Winter Wonderland themed wedding, the couple finally tied the knot. Because of Jonathan’s obsession with the holiday, and how meaningful it was to them, even their tuxes had elements of it.

Are Jason and Jonathan Still Together?

Apart from being married, another thing that Jason and Jonathan desperately wanted was to have a family. But, again, their budget at that point restricted them to do so. However, since it is a long process and Jeremiah Brent, an expert, had been through it all with his own husband, he got the couple an appointment with an adoption lawyer. That way, they could start the whole process easily whenever they wanted.

And, it seems like Jason and Jonathan have already started it, after all, they were having their friends and family make video testimonies for them. Plus, just recently, Jason’s sister started a GoFundMe page for them so that they could be financially supported throughout the whole adoption journey. With the cancer and their economic problems, we think it’s high time that only peace and happiness comes their way now.

Got some wonderful lake time with my cute nephew this weekend. Uncle Jonathan can get him to sleep! 😃

Read More: Are Mattie and Melvin Still Together?