Who is in Jason Mesnick’s Family?

Jason Mesnick, one of the most renowned ‘Bachelor’, featured in the show’s thirteenth season. He became an overnight sinner in the eyes of the public for one misstep. The season finale, that was ideally set up for him to officially propose to the lady he had chosen over 24 others, turned into a blunder. Jason discussed with Melissa Rycroft that he did not think their relationship was going in the right “direction.” Additionally, he also confessed having feelings for the runner-up, Molly Malaney, and told her that he wished to take this forward.

But who is to say if this was only Mesnick’s indecisiveness or temptation for another woman? Or had he reached this decision because he could now clearly see that Manaley was the “right one”? Only time could tell! More than a decade has passed and we think we do have the answers to some of these questions. Eager to know more? Read on!

Yesterday was a rough one. I’m walking out the door today with fresh eyes and motivation to do big things in this world. As we saw yesterday, tomorrow isn’t guaranteed, so I’m going to make a point to enjoy every minute I’ve got, doing the things I like, with the people I love! Who’s with me 🙋🏻‍♂️ @jasonmesnickgroup

Born in Cleveland, Ohio, Jason celebrates his birthday every year on 5th July. As of now (2020), he is aged 44. His parents moved to Washington state when Jason was just 8 years old and has stayed at the same place till date. He and his brothers, Sean and Larry had unsteady teens as his parents had decided to part their ways. It is no news that an adolescent’s psyche is maimed to witness their parents getting divorced.

After completing his high school education from Lake Washington High School by 1994, he graduated in 1998 from the University of Washington with a Bachelor of Arts Degree in Psychology. He also associates himself with the fraternity of Alpha Rho which preaches its brothers to from strong family ties within the house, the Greek system and the community.

After college, Jason went on to become a real estate consultant. Hitting a rough patch in his personal life made him take life-altering decisions as far as his career was concerned. In 2008, he starred on the fourth season of “The Bachelorette” as one of the suitors of DeAnna Pappas. He had even proposed her in the final rose ceremony but was eliminated shortly after.

“The Bachelor” premiered on January 5, 2009, in which Jason Mesnick was to choose his life partner from 25 brilliant women. The season concluded with him announcing Melissa Rycroft as the winner. But weeks later, he broke off the engagement to pursue the runner-up, Molly Malaney. 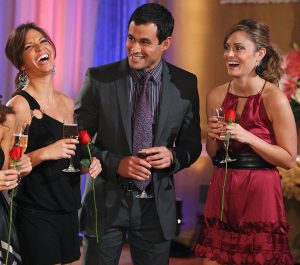 “After the Final Rose” was aired, Jason made an appearance on ‘Jimmy Kimmel Live!’ as a guest and talked about his reasons for making the switch. Till this point, he was well aware that the public was loathing him for the seemingly impulsive decision he had made, irrespective of his reasons. After tying the knot with Molly, he went back to being a residential real estate agent at NWG which specialises in working with families. Enjoying a very short duration of being a Television Reality star, he has never again mentioned anything about coming back to this world of glitter and glamour.

The audience, who had followed his journey from “The Bachelorette” up till “The Bachelor”, had a wide array of questions and doubts. First and foremost-After being rejected the first time, will Molly be able to give Jason a second chance? Then came the problem of Jason’s first marriage from which he had his son Tyler. Anybody who agreed to marry him would have to accept the huge responsibility of being a stepmother. Clearly, he was choosing someone to complete his family, not just start one.

He won’t brag, so I’ll do it for him…out celebrating tonight! @jasonmesnick sold the most expensive condo in the HISTORY of Seattle real estate!!! I’m not biased…he is the BEST in the biz! 🏡🙌🏻💕🎉

Molly whole-heartedly gave Jason a second chance. About accepting Ty, his three years old son, she was very explicit in her support as she said, “If I love you, I’m going to love Ty because Ty is a part of you” (during the show.) The couple crossed such hurdles and started dating around March 2009, after the cameras had stopped rolling on them. They wanted to bond with each other in real life and see how it worked out and this they did for a few months.

Where do I start Mrs. Mesnick.  Let me apologize publicly again for putting you through the Bachelor🌹 mess that I created.  With that being said… it built an incredible, unique, foundation for us to build our family – showing that we can make it through anything.  You are, by far, the most generous person that I have ever met.  Molly would literally take the shirt off her back for anyone (I beg her to do this all of the time 😉) Without a beat, she became a step-mom at age 25 and has been there, unconditionally, for Ty for 10 years.  She's created the most beautiful and comfortable home for our family, welcomes everyone with an open door (she is the hostess with the mostest). I wish you could all see the way Riley looks up to her. Riley sees all that Molly is and is the perfect Mini-Molly.  I love you with everything that I am and look forward to tackling the next chapter with you!  Now lets go to @terranearesort for our 10 year celebration!

In October 2009, Jason and his girlfriend went for a vacation to New Zealand where he proposed marriage and she happily said yes! In spite of the tsunami rains, the couple got married on February 27, 2010, in the Los Angeles suburb of Rancho Palos Verdes. ABC production house aired this as a two-hour special named, “The Bachelor: Jason and Molly’s Wedding.”

Yes! Three years after they’d been married, the couple welcomed Riley Anne on March 14, 2013. Jason lovingly calls her “Mini-Molly” and takes pride in the fact that their daughter looks up her “incredible mommy.” He also happily acknowledges the fact that Molly has always considered Ty as her own.

Happy Mudders Day to my super hero wife! You are an incredible mommy and have always treated Ty like your own! I love love love you. 😘😍💕

A rough start does not necessarily mean that things could not take a turn for the good. Interestingly, in June 2009 Melissa Rycroft announced her engagement to a man she had been dating in Dallas and was married by the end of the year. In fact, all three of them, Melissa, Jason and Molly, are living their best life and have nothing to regret. This year, Jason and Molly celebrated their ten-year wedding anniversary along with their children and fur-babies.

Tackling life, hand-in-hand, for 10 years straight! . I don’t think anyone really knows just how incredible @jasonmesnick is… He goes to workout EVERY morning. He reads from a book everyday. He is WILDLY successful in his career – giving 150% to his work, while also giving 160% to his family. He coaches Riley’s teams and shows up to EVERY single one of Ty’s games (corrected by Ty: he’s at 98% of Ty’s games 😂). He legit maintains every relationship in his life – never going too long without connecting with a friend (whether it’s over lunch, coffee or on the phone)! He’ll be a single digit handicap golfer this year, does all the laundry, never complains, never gets rattled, and this all isn’t even half of it! @jasonmesnick – you are SUPERHUMAN! I strive to be more like you every single day, and am so proud to call you my partner! . Happy 10 year anniversary – I can’t wait to see what the next 100 brings us! (Just kidding – we’ll be dead by then, but you know what I mean 😜) . ❤️❤️❤️