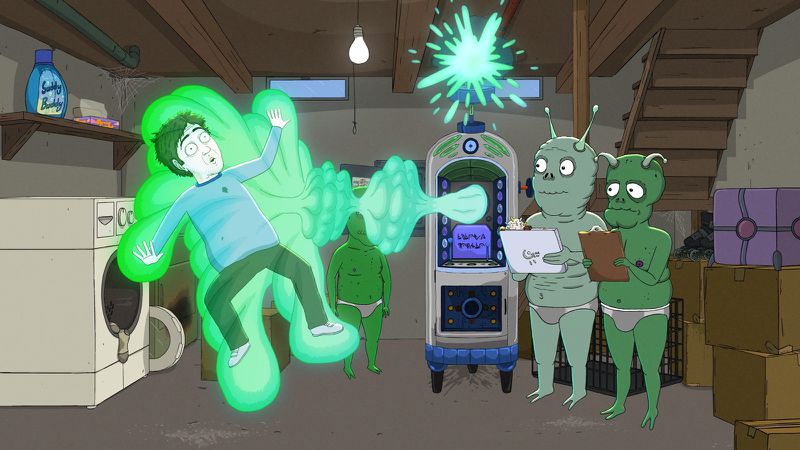 ‘Jeff & Some Aliens’, created by Sean Donnelly and Alessandro Minoli, is an adult animated sitcom, inspired by the sketch comedy, ‘TripTank’. The story is about the most average person in the world, who inhabits with his three alien roommates. The trio are sent to earth in order to test humans and to understand if humanity needs to be eradicated altogether. The humorous series mostly chronicles Jeff as he faces various problems and his alien roomies step in to help him.

Jeff & Some Aliens Cast: Who is in it?

‘Jeff & Some Aliens’ features a promising cast, comprising Brett Gelman as Jeff Mahoney and Alessandro Minoli as the aliens — Jimmy, Ted, and Sammy. Actor and comedian Gelman is a popular name from Adult Swim, owing to his role of Brett Mobley in ‘Eagleheart’. He has also starred as Mr. K on the NBC show, ‘Go On’, as Hamish on ‘Another Period’, and as A.J. in ‘Married’. His other acting credits include his appearances in ‘Fleabag’, ‘Twin Peaks’, ‘Making History’, and ‘Stranger Things‘. On the other hand, writer and actor Minoli is best known for ‘TripTank’ and ‘La marea silenziosa’.

Accompanying the protagonists in other prominent roles are Jon Daly as Chet, Josh Fadem as Dave, Marc Evan Jackson as Zoops, Mark Ivanir as Evgeny, Alicia Silverstone as Alison, Zack Pearlman as Corey, Helena Mattsson as Inga, Tress MacNeille as Pam, Richard Kind as Stanley, and Natalie Smyka as Linda.

Jeff & Some Aliens Plot: What is it about?

Meet Jeff, the most average person on the planet, trying to lead an average life with average means. However, his simple routine is subject to constant interference from his three alien roommates. These extraterrestrial beings are envoys from the Galactic Council who are here on earth to judge Jeff. In fact, Jeff serves as the perfect sample to test the entire human population. Although the primary motive of the aliens is to pass a final verdict, they often butt into Jeff’s problems, causing more complications and chaos. Additionally, this also taints their own analysis.

So, why is Jeff the proud owner of the title for the most average human? Forever clad in stained clothes and a serial loser, he serves as the ideal specimen for superior aliens to decide if the planet should be saved or destroyed. However, as the story progresses, we see that Jeff is a little bit below average. Usually, all of his actions lead to self harm. And of course, most of the scenes are uncomfortable. Whether Jeff tries to impress his girlfriend, accidentally ends up murdering an alien, or kills an old lady after spitting on her (to avoid an intergalactic war which involves boiling humans into some gooey, molten flesh), the scenes echo of those perfect elements that constitute dark comedy. Of course, this is to be expected; is it not?

Accompanied by gross, violent, and sexually inappropriate humor, ‘Jeff & Some Aliens’ does manage to conclude with moral lessons. If you have watched other Comedy Central comedies such as ‘Workaholics’, ‘Idiotsitter’, and ‘Another Period‘, you are bound to find many similarities. Unsettling yet influential, this series also embraces the aesthetics of Adult Swim. And we are in an era where we have multiple adult cartoons in the names of ‘Rick and Morty’, ‘Bob’s Burgers’, ‘Bojack Horseman‘, ‘South Park’, and ‘The Simpsons’. Then there’s nothing really radical about this show. With clean plots and seamless narration, ‘Jeff & Some Aliens’ is a wonderful adaptation of ‘TripTank’, without sacrificing its source material’s original crudeness.

Jeff & Some Aliens Season 2 Release Date: When will it premiere?

‘Jeff & Some Aliens’ Season 1 premiered on Comedy Central on January 11, 2017 and concluded with its 10th and final episode on March 15, 2017. Now as far as ‘Jeff & Some Aliens’ Season 2 is concerned, it has been officially announced that the series stands cancelled after the first installment. It appears that the scripts had been written for a second part, but sadly, the show was not given a green light. Hence, there won’t be a new season on CC, that’s for sure.

However, the series received good reviews from critics and enjoyed a small yet loyal fan base after its release. Therefore, let’s not lose hope yet. Maybe, Jeff and his extra-terrestrial roommates might land on another platform, such as Adult Swim, Hulu, or Netflix. But there is no official announcement yet. We shall update this section as and when we get more concrete news about ‘Jeff & Some Aliens’ Season 2 release date.

Below is the official trailer for ‘Jeff & Some Aliens’ Season 1. You can check it out to understand what the series is all about. Additionally, if you have not watched the show yet, you can head over to Comedy Central to catch up on the first season.