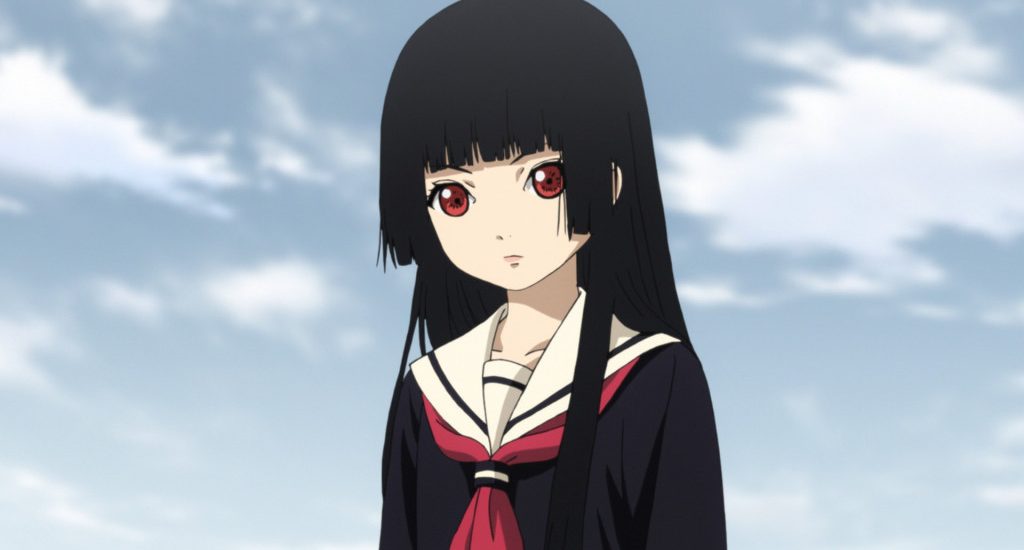 The modern world is bustling with technology and everyone’s life revolves around the internet in one way or the other. ‘Jigoku Shojo’ uses the internet as a medium to portray the cruelty and the evil that exists in the human world. It shows that there are many people out there who are suffering to an extent where they wish that the people who are making their lives so miserable would just die and burn in hell. Each episode introduces a new victim who suffers under the brutality of someone. You, as a viewer, get to see how badly they’re being treated and you yourself wait for the character to just pull the plug and end the suffering. It’s these terrifying representations of all the horrors that certain characters go through make this anime stand out and will hook you to it from the first episode itself.

Coming from Studio Dee, that is known for producing anime like ‘Fate/Stay Night‘, ‘Fruits Basket‘ and ‘Rurouni Kenshin‘, the artistic portrayal of all the gruesome revenge taken on the tormentors is just stunning and even the overall colors of the show are incredibly rich. The character designs have been done by putting a lot of emphasis on character expressions and even the backgrounds, for the most part of it, have a lot of detail.

The music includes western classic instrumentals, traditional Japanese scores and also a couple of rock numbers. All of these are just perfect for the vibe of the anime. Overall, ‘Jigoku Shoujo’ has an amazing concept that has been executed well. The best parts of the show has beautiful visuals with some great music stay intact throughout. Having said that, there are also parts of it that you’ll absolutely hate. But at the end of the day, you will certainly not regret watching it.

Hell Girl Season 5 Release Date: When will it premiere?

All those who have been following this series all this while might have noticed the drop in its ratings with each season. But even then, ‘Hell Girl’ has a very loyal set of fans who are just not willing to give up on the series. When it comes to season five of the anime, as of now, it is very hard to predict whether or not it’ll happen. The anime has followed a very unpredictable release pattern in the past and has been revived once even after a break 8 long years. So unless there is some confirmed news regarding this, there isn’t much we can say about it. Even then, it seems very likely that the anime will be renewed probably in the next two years. We can hopefully expect confirmed news regarding ‘Jigoku Shoujo’ season 5 release date sometime by the end of 2020.

Unfortunately, despite being licensed under Sentai Filmworks, ‘Jigoku Shoujo’ has not received any official English Dubs yet. If we get any updates regarding this, we will certainly update it here in this section. Till then, you can stream the anime with its original Japanese audio and English subtitles on Crunchyroll.

Initially, pretty much every single episode carries an independent story that revolves a strange website known as the Hell Correspondence. This website magically appears only to those who have been suffering from torture of some sort from someone they know. Anyone who gets access to the website can then submit a request and get rid of that person forever. Once this request is completely processed, the Hell Girl named Ai Emma appears and presents a doll with a red string on its neck. The person who submitted the request only has to pull this string to send the “named antagonist” to hell. Ai Emma and her other demon friends then torment this offender in hell. But even the person who decides to do this has to pay a price by later accepting a place in hell after his/her life is over.

Later, a journalist named Hajime Shibata starts investigating the rumors around the Hell Correspondence website and to his surprise, he finds legit evidence to prove that people are actually being dragged down to hell. He even finds out that his own daughter Tsugumi can see Ai Emna and this later leads to conflicts between them on deciding whether or not they should try to save the lives of those who are victims of the website. As the series further progresses, many new characters are introduced, out of which, Kikuri plays quite a significant role of another girl from hell who can freely move between the Earth and Twilight realm. Another major character who is introduced in the second season is Takuma who is blamed by the people of his town for the disappearance of many people. But later it turns out that many people of the town were simply using the Hell Correspondence website to get rid of people. In the most recent season, a character named Michiru is introduced, whose fate is to eventually become the successor to the Hell Girl title and Ai helps her realize that.

Ai Enma is the main protagonist of the series who is also referred to as “The Hell Girl.” She is not a human and is more of a spiritual entity who loves in the twilight realm with her grandmother. She seeks revenge for those who enter names on the Hell Correspondence website. The sole reason why she started the website in the first place is more of a consequence of her tragic past where the people of her village had sentenced her to a sacrificial death. She was buried alive but she later somehow managed to break out of her grave and burned down the entire village.

Hajime Shibata is a former journalist who now earns a lot of money by collecting evidence of celebrity scandals and then later using these to blackmail them. The whole Hell Correspondence case gets his attention and he starts to investigate it merely out of interest. But soon he gets all involved with it as he realizes that all of it more than just an online rumor. Moreover, his daughter seems to have a strange connection with the Hell Girl Ai and is able to see everything that Ai sees.

Tsugumi Shubata is Hajime’s daughter who seems to have a very mysterious connection with Ai. In the beginning, she tells her father everything that she is able to see through Ai’s eyes but later, she starts disagreeing with her father’s beliefs and becomes more reluctant towards sharing things with him.

Kikuri is introduced in season 2 of the series and very little is known about her origins as a human. The only thing that is known is that she can freely move from the mortal plane to Ai’s home in the sunset world.