Are Joanna and Romain From The Real Housewives of Miami Still Together? 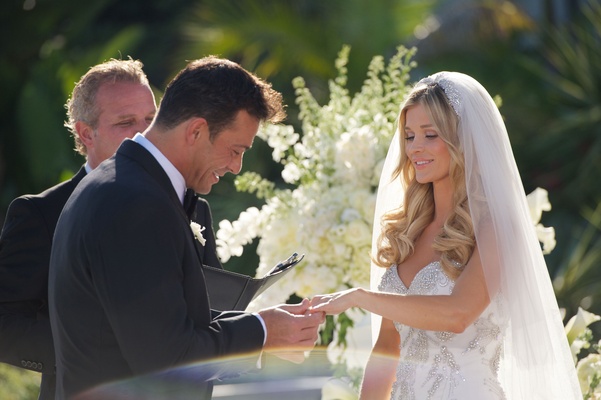 Imagine being left awestruck at seeing a face and destiny playing its cards right and so you end up marrying him in a few years? Too good to be true, right? This is not a scene from some movie but a real love story of a Polish model and actress and Romain Zago. The two met at the stroke of luck and spent a decade together before calling it quits. But what could have gone so wrong that the magical story did not have a happy ending? Here is everything we know about their journey.

Joanna and Romain: The Real Housewives of Miami Journey

The Polish model and actress first saw him in February 2007 on a Television screen, while he was being interviewed about the hottest nightclub in Miami Beach. This was during the Super Bowl weekend when Joanna was celebrating her first Ocean Drive cover at “Mynt,” a clubhouse owned by Romain. She did not remember when exactly she met him for the first time but during her party, they shared an interesting conversation that she could not take off her mind. Joanna admitted that she fell in love with his touching smile and kind, friendly eyes. The two started dated from then on and had an almost smooth relationship for six years.

To my rock and my biggest fan @romain_zago . Thank you for letting me be me and giving me wings to fly and follow all my dreams. You inspire me to keep going and be the best I can be. Love you forever #myrock #birthdayparty #celebration #friends #love #family #angelsforanimalrescue @angels_for_animal_rescue @310nutrition #310nutrition @besohollywood

The only bump that the couple hit during their courtship period was when Joanna unintentionally browsed through her boyfriend’s laptop. She found some incriminating emails that pointed to his infidelity. Heart-broken, Joanna took the high road and tried to fix the relationship instead of deciding to end things. She cooked him dinner and talked calmly about the whole incident. Romain admitted getting off track for some time but swore that he had not cheated on her.

She believed that he was telling the truth and treated the whole thing as a “wake-up” call for them to start prioritizing their relationship. She took a trip to Bimini to heal herself. After she got back home, Romain got on his knees and re-proposed, in a beautifully decorated apartment. She knew it that her heart contained too much love for her man to not forgive him, and so she gladly says Yes! They eventually got married on June 13, 2013, at the Park Hyatt Aviara in San Diego, Calif.

Are Joanna and Romain Still Together?

Unfortunately, no! When it seemed to the world that the two had overcome all the difficulties of the past, new ones cropped up in the lives of the newlywed couple. Romain had intimacy issues and suffered a lack of drive in the initial phase. He had to seek therapy and felt better after almost three months. The couple tried to appease each other’s desires by scheduling sex as Joanna insisted on feeling the “passion” again.

But only after four years of honest efforts from both the sides, they started to feel like they had grown apart. Despite having similar feelings of detachment, Joanna was not quite expecting Romain to ask for a divorce. When Romain suggested the idea in mid-December of 2016, she could not bear the pain as the thought of living away from her husband was unimaginable to her. She accepts that she had been traveling too much and had failed to give him the joy of a “family”. It took her seven months to pick herself up again and fill her ‘short-life’ with as many happy moments as possible.

Her work as an animal activist massively helped her get through this tough phase. She found the much-needed peace in helping animals, a job she feels passionately about. Joanna filed a divorce on July 10, 2017, and was legally separated from her ex-husband almost a month later. Respecting their 10-years long relationship, they have remained on good terms and treated the subject with dignity by not slashing each other’s public image.

Where are Joanna and Romain Now?

After indulging herself in her work and learning self-love, Joanna found love again in her sweet and charming man, Douglas Nunes, whom she married on August 4, 2018. They had a beautiful baby girl on February 2nd February 2019 whom they named ‘Asha-Leigh Presley Nunes’. Joanna considers motherhood as her life’s greatest gift and considers her daughter her one-true love.

Romain took a little more time than his ex-wife to move on but once he did, there was no looking back for him. Marrying his girlfriend on February 23, 2020, he also became a step-dad to her daughter. He feels thrilled to be a father-figure to Camila and looks forward to having a family of his own with his beautiful wife, Carolina Delgado, whom he adores each day.

I woke up to a wonderful, surprising and very touching homage this morning from @carolinadelgadozago @camilareyesdelgado where they wished me a very first Happy Father’s Day, so I wrote the below in her tribute: Well, I was not expecting such wonderful commendation that I am actually left completely speechless and overwhelmed w joy, tears and a sensation of accomplishment that I rarely felt before. There is no gift bigger than gratitude in my reasoning. The acknowledgment that I not only exist in her life but I actually make a difference is a tremendous reward. I had to learn how to become a Steppy to a wonderful daughter and I actually tried clumsily to support u w raising ur daughter when in fact u r not only a outstanding Mother but u also fulfill the Father tasks every day better than anyone. I am just there to assist and sometimes become the second kid for u to educate. @carolinadelgadozago , I love u and again, I can’t thank u enough for making me feel this important in someone else life. @carolinadelgadozago we may have been thru so many hurdles, but TODAY, I am grateful for each one of them cause they refined us to a moment like this where for the first time in my life, someone made me feel that I matter as a Father. @camilareyesdelgado u r my Daughty and I promise to take care of u and teach u as much as possible how to deal w the good and bad in life. Steppy loves u both.