Does Joe Exotic Sing His Own Songs? Who Are Vince Johnson and Danny Clinton?

One of the more exceptional discoveries in Netflix’s ‘Tiger King‘ has been Joe Exotic’s music videos. The big cat owner has had other interests besides running his zoo. He’s been part of political races and has a country music career of his own. However, Exotic often led people to believe him to be more grandiose than he was. It appears that Exotic has not sung any of his popular songs.

Rick Kirkham spoke about this to Vanity Fair, saying, “Joe got a little bit drunk and high, and we coaxed him into singing part of one of the songs. He couldn’t even hold a tune. It was just so ludicrous. It was a big joke within the crew and staff that it wasn’t him [singing in the videos]—but he was damned insistent to anyone and everyone, including us and my studio crew, that that was him.” Naturally, you might be curious about who’s sung Exotic’s songs. We have got you covered right here.

Does Joe Exotic Sing His Own Songs? 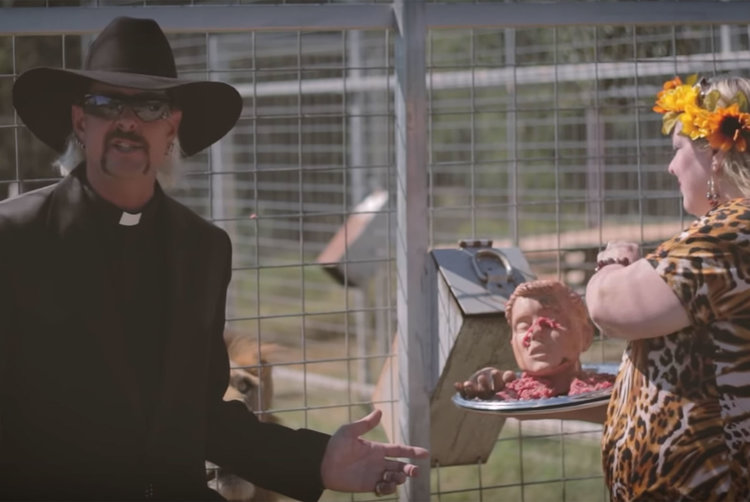 Joe Exotic has almost 28 songs and 16 music videos. He’s released albums like “Joe Exotic – The Tiger King.” Some of Joe’s popular songs include “I Saw a Tiger,” “Here Kitty Kitty,” “This Old Town,” “Pretty Women Lover,” and “GW and Me,” among others. However, Joe had tracked down two singers, Vince Johnson and Danny Clinton, to produce customized cat songs for him. He guarded the secret about his songs fiercely. Mateusz Gugałka, who produced some of the music videos, spoke on the extraordinary lengths Joe went to, to convince people that he was singing and recording the songs. He said, “We knew he didn’t go record a song, but you didn’t question Joe. You just roll with it.”

The creative process for the songs followed a simple logic. Joe would give some details and the theme to Vince. He’d write the tune, which Danny would sing. Then they’d mail it to Joe. According to Vince, Joe has not touched a musical instrument in his life.

Who Are Vince Johnson and Danny Clinton?

Vince and Danny made up The Clinton Johnson Band, from Vancouver, Washington, before Danny passed away in October 2019, due to a heart-related issue. The duo had experience personalizing lyrics to suit client needs. According to Johnson, a song they wrote about Meineke’s poor service impressed Joe. He reached out to them, saying he needed music for a show that was in a bidding war among Animal Planet, Discovery, and National Geographic. The band decided to work pro-bono, to gain exposure. They made around 20 songs for him, before realizing that there was no television show, except for what Joe was putting out on his channel.

They started working for Joe, with “I Saw a Tiger,” and went on to help him make songs like “Guardians of Children.” However, a few songs later, they realized Joe was lip-syncing to their work, pretending to be the one who was performing the songs. Johnson said in an email to Vanity Fair, “I had no idea he was going to Milli Vanilli the songs. It was a couple of months and two or three songs [into the collaboration] when I was on YouTube one night and just happened to look up Joe Exotic. And there he was, lip-syncing and acting like the ghost of Elvis [in these music videos]. I called him up, I was hot…And he bamboozled me about his reality show—that it was coming soon and he would make everything right as rain. I just wanted the proper credit.”

Johnson merely wanted recognition, and Joe promised to make things right as rain. Although the band did not get their due from Joe, Johnson is hopeful that the success of ‘Tiger King’ might catapult their work into recognition. So far, he’s received calls from news outlets, but no record labels, disappointingly. Despite walking away with the short end of the stick, Johnson doesn’t regret working for Joe. He said, “We all get what’s coming to us in the end, be it good or bad. Joe, all in all, was likable. Most people just bore the hell out of me. They have the personality of a lobster. He’s a seedy shyster, but he’s got personality.”